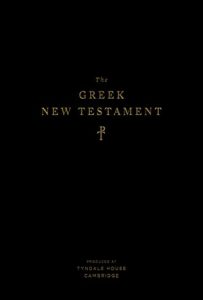 Produced at Tyndale House, Cambridge, England, and edited by Dirk Jongkind and Peter Williams, The Greek New Testament (TGNT) is a new critical edition of the Greek NT. Based on the critical edition by Samuel Prideaux Tregelles (1813-1875), it utilizes a documentary approach that “aims to present the New Testament books in the earliest form in which they are well attested” (p. vii). The focus of the work, therefore, is on “directly verified antiquity” (p. 507) as seen in the text and the features of the earliest Greek manuscripts. In terms of its structure, the edition is simple and straightforward: a two-page preface is followed by the Greek text of the NT, which is in turn followed by a twenty-page introduction to the edition that explains some of its features.

Since the focus of the edition is on the “directly verified antiquity” of the text and features of the earliest manuscripts, it is distinct in several ways from the Nestle-Aland and United Bible Societies Greek New Testament editions (NA28 and UBS GNT5, respectively). First, the text of the critical edition is “attested in two or more Greek manuscripts, at least one being from the fifth century or earlier” (p. 506). There are no conjectural readings, nor is there reliance on the readings in the versions or patristic citations. Likewise, while the editors recognized their evidentiary value, the witness of medieval Greek manuscripts known as minuscules was not deemed sufficient in itself to support the editors’ textual decisions. As it turns out, the text of the TGNT is almost identical to that of NA28 and UBS GNT5 (for a minor difference, cf. Jude 5). The disputed ending of Mark is included in TGNT, with a note from minuscule 1 printed between 16:8 and 16:9: “In some of the copies, the evangelist finishes here, up to which (point) also Eusebius of Pamphilus made canon sections. But in many the following is also contained” (p. 107, editors’ translation). Interestingly, the Pericope Adulterae (John 7:53-8:11) is relegated to a footnote in the apparatus, in keeping with the earliest Greek witnesses.

Second, the TGNT presents the particular features of the Greek manuscripts, especially orthography (spelling, breathing marks, accents), paragraph markings, and the order of the NT books. Regarding orthography, the TGNT replicates the ancient tendency to use ει for ­ī, and ι for ĭ in certain books (e.g., γείνομαι instead of γίνομαι in Mark), although no attempt was made to standardize such. Further, on account of their relative absence prior to the use of minuscules, absent are many non-dative iota subscripts (e.g., Mark 6:56, ἐσώζοντο instead of ἐσῴζοντο). “Because of the important historical information that breathings and accents may contain,” the breathings and accents are included “in their early widely attested form” (p. 513), even though such often post-date the earliest attested letters.

Additionally, the TGNT replicates the ancient paragraphing method known as “ekthesis,” in which the first line of a new section protrudes into the left margin. Even though the paragraph marks may differ from the modern consensus, these provide the reader with an ancient testimony to a text’s structure.

Also, the TGNT follows the order of the NT books as found in the majority of early, whole-NT Greek manuscripts. The order is as follows: Gospels  – Acts – General Epistles (James – Jude) – Pauline collection (Romans – Hebrews) – Revelation. This order, which is not the only attested order in the manuscripts, is attested in the early Christian canon lists as well, and thus is an early attested alternative to the commonly recognized order today.

Due to a focus on the text and early manuscript features, the TGNT, in contrast with NA28 and UBS GNT5, does not include marginal notes (e.g., suggested cross-references or citation sources), headings, quotation marks (cf. italicization of OT citations in NA28), or variant markers in the text. Additionally, besides the introduction to the TGNT, in which is listed the primary Greek witnesses (papyri and majuscules, and a few minuscules), no appendices appear (cf. the several appendices in NA28). The minimal apparatus on each page is because “we believe that this edition’s chief significance, like that of Westcott and Hort, lies not in its apparatus but in the text itself” (p. 507). The TGNT is, therefore, designed to focus the reader on the text, not on addenda.

The TGNT’s focus on “directly verified antiquity” is valuable, not only for the ancient text it produces but also for its historical value. The standardization of spelling and book order in the NA28 and UBS GNT5, as well as their utilization of modern paragraph markings, can have the deleterious effect of removing the reader from the ancient features of manuscripts. Hence, the value of the TGNT is its ability to raise the reader’s awareness of the historical state of affairs in the earliest Greek manuscripts.

Further, the value of the TGNT is its focus on the text itself. The attention to the early Greek manuscripts is a commendably conservative point of departure for any attempt to arrive at the original text. And as helpful as addenda may be, the Greek words themselves are that which God has revealed and therefore should hold a place of primacy and focus.

Still, a focus on “directly verified antiquity” comes at the cost of omitting that which is also valuable: other manuscript evidence, appendices, and apparatus. The editors’ decision not to include as primary evidence the minuscules, versions, or patristic citations lessens the support their text might have otherwise enjoyed. To be sure, the editors are aware of the value of this other evidence (p. 507), but the point should be pressed that (1) some of the versions are themselves quite ancient (e.g., Latin codices) as are the patristic citations, and (2) later manuscripts may attest to early readings (i.e., earlier manuscripts are not always better than later manuscripts). Even if this evidence is not “direct,” it is still ancient evidence.

Also, it is unclear how the editors decided on the text when their text-critical principles conflicted. For instance, if multiple early Greek manuscripts attested a reading that, at the same time, appeared to arise from a scribal error, on what basis did the editors make their decision? In the next few years, the editors plan to produce a textual commentary, which one can hope will answer some of these questions.

For some, the variegated spelling and the inclusion of unexpected accents (e.g., the indefinite pronoun τίς is accented) may provide a minor challenge to Greek readers. Similarly, the absence of headings may obstruct the casual reader from locating a text quickly, or the absence of marginal notes may hinder the scholar or pastor’s awareness of a citation or allusion in the text. Nevertheless, the TGNT’s focus on the text of the Greek NT should commend itself to all those who care about the original text of the NT. Those with an interest in ancient Greek manuscript features will also find this edition stimulating, particularly the hermeneutically suggestive method of “ekthesis.” The TGNT is not intended to replace but to complement the NA and UBS editions, and it should stand alongside of them as yet another outstanding critical edition of the Greek NT. 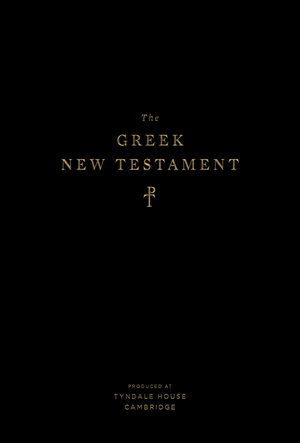