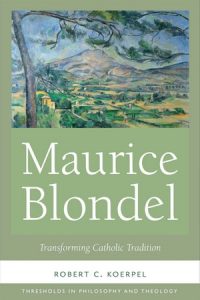 In the introduction to his book, Robert Koerpel insightfully observes that it is a “paradox of history that Blondel has become one of the most influential, least well-known, and consistently misunderstood figures in Catholicism” (p. 2). Indeed, Blondel’s philosophy of action, which led to accusations of immanentism as well as naturalism, nevertheless infiltrated French theology to such an extent that twentieth-century French debates over the relationship between nature and the supernatural are inconceivable apart from his philosophy. Koerpel’s focus, however, is to revisit a different area of Blondel’s influence—his idea of tradition, which Blondel developed at the height of the Modernist Controversy. During this time Blondel’s orthodoxy was questioned within circles of ecclesial influence. Blondel’s essay, History and Dogma (1904), emerged out of the controversy, and yet took hold in the French theological imaginary in a way that extended far beyond that particular debate with Alfred Loisy. As Koerpel notes, key Catholic figures such as Jean Daniélou, Yves Congar, Marie-Dominique Chenu, Edward Schillebeeckx, Karl Rahner, and Henri de Lubac all sought to recover a deeper sense of the meaning of tradition, and to find in tradition a source of reform and renewal. Koerpel’s project, in part, similarly intends to recover in Blondel’s idea of tradition a resource for contemporary engagement, especially for an English-speaking audience. To that end, Koerpel engages in something akin to “retrieval;” he pays meticulous attention to the historical situation out of which Blondel’s argument emerges, drawing it into constructive conversation with modern thinkers.

In History and Dogma, Blondel sought to address an increasing skepticism towards the validity of dogma in his day. The emerging study of religion from a historical perspective in the nineteenth century contributed to a loss of confidence in biblical and ecclesial authority. Blondel observed that so long as “Christian facts” (history) and “Christian beliefs” (dogma), had appeared to coincide, there was no urgency to work out how it was that the Church had moved from history to dogma.  What is required, he suggested, is an account of the Church’s third epistemological way, that is, the means by which the double-step is taken between history and dogma, a synthesizing principle that is distinct from, but mediates between, history and dogma. Blondel wished to show that there is more than one way of attaining of Christian knowledge, more than a single avenue by which the Church has recourse to its Lord. For Blondel, this means is to be found in the tradition of the Church, re-understood first and foremost as faithful action rather than as an intellectual deposit.

One of Koerpel’s great contributions in this book is the way he draws not only on History and Dogma (which is translated into English), but on Blondel’s corpus more broadly (much of which remains untranslated) in order to deepen the reader’s understanding of what Blondel means by “tradition.” In so doing, Koerpel is able to show how it is that a term so loaded with baggage in the wake of the French Revolution (not to mention in the Modernist Controversy) could have proved so fruitful for the young philosopher. So, for example, Koerpel connects Blondel’s idea of tradition to his earlier use of Leibniz’s vinculum substantiale, as well as to his later foray into the epistemological distinction between real and notional knowledge. The goal is to demonstrate how, for Blondel, tradition, as a bond, is capable of mediation between polarities: history and theology, epistemology and ontology, nature and the supernatural. Following Blondel, Koerpel stresses that what in theory is divided, finds unity (without confusion) in practice. Since tradition is, primarily, the living synthesis of faithful praxis, it has the capacity to reconcile antinomies.

In emphasizing this running theme in Blondel’s broader corpus, Koerpel also hopes to problematize, or at least soften, the critique lobbied against Blondel by Yves Congar, who saw in Blondel’s understanding of tradition a devaluation of tradition’s more explicit sources and a prioritizing of its implicit and vital character. Contra Congar, Koerpel argues that Blondel’s intention was to locate in tradition the unifying means by which the dialectical movement between implicit and explicit, real and notional, takes place. However, whether Koerpel is able to completely assuage Congarian angst remains an open-ended question. Despite Blondel’s insistence on the unity-in-distinction between real and notional knowledge, the implicit and the explicit, it seems he nevertheless continued to prize, in describing how tradition effects its synthesis, one side of the dialectic as the primary driver (faithful action and implicit knowledge). This in turn meant that what constitutes the visible marks of tradition remains somewhat vague in Blondel (who can be forgiven, as a philosopher and not a theologian, of abstaining from articulating tradition’s visible manifestations in more detail). Koerpel, however, argues that by “faithful action” Blondel did have in mind praxis that intimately linked tradition with a particular ecclesial identity—that is, the sacraments and the liturgy. Nevertheless, it would be left to someone like Congar to articulate more clearly and with greater historical depth the explicit sources of tradition, its “monuments,” which on the one hand helped to distinguish the Catholic tradition from other traditions, but on the other hand ran the risk of identifying tradition too closely with its effects. The danger there is always that of a return to a more juridical mindset. If Blondel was in danger of saying too little, Congar was in danger of saying too much. Still, one can read their respective expositions as complementary and mutually-reinforcing, and it seems Koerpel’s comparison of the two leans in that direction.

The book’s outline is as follows: In Chapter 1, Koerpel focuses on Blondel’s philosophical reception, showing that the young philosopher wished to steer a course between positivism and spiritualism. It is here that Koerpel also introduces the reader to Leibniz and his impact on Blondel’s philosophy of action. Chapters 2-4 provide a robust account of the particular sitz-im-Leben that generated Blondel’s History and Dogma. This includes an examination of the dominant neo-Thomist account of tradition (which Blondel termed “extrinsicism”), the epistemological crisis of “representation” in idealism, and finally, the “historicism” of Alfred Loisy and its connections with John Henry Newman. Chapter 5 examines the noetic value of action for Blondel, while Chapter 6 delves more deeply into the particular argument found in History and Dogma. Chapters 7-8 broaden the scope of discussion again, with a foray into the question of the relationship between epistemology and ontology in dialogue with the likes of Congar, Schleiermacher, Dilthey, and Heidegger.

Koerpel strikes a very good balance between careful exposition and constructive engagement, introducing Blondel with clarity to an English-speaking audience, for whom Blondel still remains all-too peripheral. Koerpel shows why Blondel’s work continues to resound over a century later, and why his idea of tradition remains a rich resource for contemporary theology. Undoubtedly, this book will contribute greatly to Blondel scholarship, as well as to continued debates over the theological and philosophical significance of tradition. 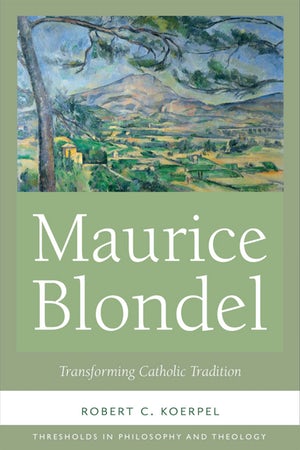