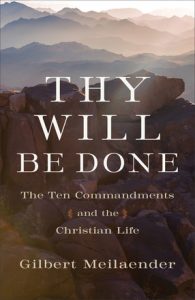 Gilbert Meilaender, a Lutheran research professor at Valparaiso University in Indiana, is a leading ethicist. His textbook on bioethics is generally considered a standard. In Thy Will Be Done he follows in a long line of Christian tradition that reflects on the Christian life in terms of the Ten Commandments.

On the basis of Exodus 20 and Deuteronomy 5, it is difficult exegetically to know how to number the Ten Commandments. Three different numbering systems have developed. The Catholic-Lutheran numbering, which Meilaender follows, treats the prohibition against other gods and graven images as the first, the prohibition against using God’s name in vain as the second, the command to sanctify the Sabbath as the third, the command to honor parents as the fourth, the prohibitions against murder, adultery, and stealing as the fifth, sixth, and seventh, the prohibition against bearing false witness as the eighth, the prohibition against coveting the neighbor’s house as the ninth, and the prohibition against coveting the neighbor’s wife, servants, and possessions as the tenth. The Eastern Orthodox-Reformed numbering treats no other gods and no graven images as two commandments and unites the no coveting statements into one commandment. The Jewish numbering considers the first “word” (technically the Old Testament calls them “ten words”) to be “I am the LORD your God who brought you out of the land of Egypt, out of the house of slavery.” Exegetically speaking, the Catholic-Lutheran numbering is doubtful. It would mean that the ninth commandment changed from “neighbor’s house” in Exodus 20:17 to “neighbor’s wife” in Deuteronomy 5:21. Perhaps the Jewish numbering is the most plausible from an exegetical point of view. At any rate, we know that there are “ten words” (Exodus 34:28; Deuteronomy 4:13; 10:4).

Meilaender discusses the Ten Commandments by considering five bonds: the marriage bond (prohibition against adultery), the family bond (honor parents), the life bond (prohibition against murder), the possessions bond (sanctify the Sabbath day, prohibitions against stealing and coveting), and the speech bond (prohibitions against taking the Lord’s name in vain and against bearing false witness against the neighbor). In the last chapter he considers the first commandment. He looks at God’s will as expressed in the Ten Commandments from three angles by asking how they relate to us as creatures created by the Creator, as sinners in need of healing and reconciled to God in Jesus, and as heirs of the future promised by God when we will be perfected. All three angles are important for understanding God’s will for the Christian life through the framework of the Ten Commandments. That third angle is often overlooked. “What we cannot do for ourselves or make of ourselves, the Spirit of the risen Christ promises to do in us” (p. 123). In that sense one might say that for Christians the Ten Commandments also become the “Ten Predictions.” In the last chapter he reflects on the two great commandments, to love God and to love the neighbor. He stresses that they summon us to live both loves simultaneously and, at the same time, to love God first, which will inevitably lead to a tension.

By way of evaluation I found the volume to be quite strong, thoughtful, and well-written. In a short compass of 125 pages Meilaender covers a wide array of issues that relate to Christian living, including ethical challenges. I would characterize his own views as balanced and in line with traditional Christian positions. He stresses that the church’s practice should conform to the Scriptures. He sees the five bonds as schools created by God to foster a virtuous and a faithful people, so that we are drawn out of a sole focus on self. He has perceptive things to say on each commandment. For example, Christian catechesis often includes obedience to the government under the command to honor parents. However, Meilaender keeps the focus on parents in order to stress that the basic unit is the family, which serves as a defense against an overweening reach of governmental power.

Meilaender brings biblical texts into his reflections, although in places I wanted to see more treatment of the biblical evidence, for example, the promise expressed in the command to honor parents (Ephesians 6:2-3). With respect to the prohibitions against stealing and coveting, a discussion on private property would have been helpful. Meilaender exhibits a wide range of reading and mentions a variety of secondary sources, such as Barth, Bonhoeffer, and C. S. Lewis. He frequently points to Martin Luther’s Small and Large Catechisms, John Calvin’s Institutes of the Christian Religion, and the Roman Catholic Catechism of the Catholic Church. As evidenced by his use of these sources, there seems to be basic agreement on the Ten Commandments among traditional Lutherans, Calvinists, and Roman Catholics. However, at a few places he expresses disagreement with Roman Catholic positions, such as their positions on marriage and capital punishment. Although Meilaender does not discuss it, one disagreement between Calvinism and others deals with the prohibition against graven images. The disagreement focuses on whether that statement prohibits a crucifix or pictures of Jesus from a church sanctuary.

I highly recommend the book. The Decalogue deserves meditation by Christians, and Meilaender’s reflections succeed in promoting and enabling such meditation. His final words give a fitting conclusion to the volume:

In that day, in the promised new creation, the tension between the two great commandments will be no more. We will hear again the ten words, but now clearly as promise. You shall love the LORD your God with all your heart, soul, and mind. You shall be a bride eager to greet her bridegroom, a child who loves the Father, a creature who honors the life of every fellow human being, a creature whose Lord is rich enough to meet every need, a lover of God whose first and last word is, “Thy will be done” (p. 125). 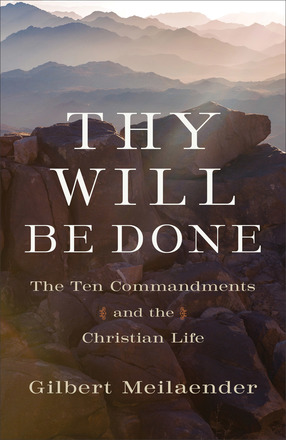