Understanding the Paraclete Title: Any Help from the Targums?[1] 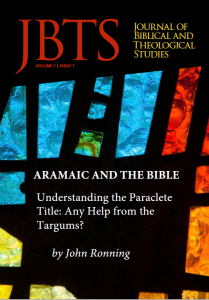 “Helper” is one suggested meaning of the fairly rare Greek word παράκλητος, found in the NT only in John’s writings.[2] In a previous study I suggested the possibility that when Jesus promised “another Paraclete, that he may be with you forever” (John 14:16), he may have been using targumic language, since in the extant Targums the divine promise to be with his people is frequently paraphrased with the idea of the divine Word (Aramaic מֵימְרָא) being their “Helper.”[3] The present paper explores further this possibility.

The term (παράκλητος) is used of the Holy Spirit by Jesus in his upper room discourse (John 14:16-17; 15:26; 16:7).  Additionally, it is used by John (1 John 2:1) to describe Jesus after his ascension.  Implications for the doctrine of the deity of the Holy Spirit would seem to come not from the definition and possible OT background of the word, but from the fact that the same term is used for both the Son and the Spirit, who carries on the work of the Son after his ascension to the right hand of the Father. This paper suggests that the title παράκλητος should be understood as a divine title equivalent to the OT (Hebrew) depiction of God as the Helper of his people. This thesis, therefore, suggests that “Helper” is a reasonable, perhaps the best translation of the term, and does indeed support the view that the Holy Spirit is the divine Helper sent to be with the Church of Jesus after his ascension.

I have suggested, based on Targum Pseudo-Jonathan Numbers 7:89, that Jesus was identified as the divine Word, in targumic terms, at his baptism in the Jordan. Note the following:

And when Moses went into the tent of meeting to speak with him, he heard the voice speaking to him from above the mercy seat that was on the ark of the testimony, from between the two cherubim; so he spoke with him. (MT)

And when Moses went into the tent of meeting to speak with him, he heard the voice of the Spirit as he descended from the heaven of heavens over the mercy seat, which was upon the ark of testimony between the two cherubim, and from there was the Word (דבירא) speaking to him. (Tg. Ps.-J.)[4]

Read the full article: Understanding the Paraclete Title: Any Help from the Targums?

[1] This article is adapted from a paper by this title read at the Eastern Region meeting of the Evangelical Theological Society, Liberty University, Lynchburg, VA, April 6, 2019.

[4] דבירא is used mostly in the Palestinian Targums of the Pentateuch, and functions similarly to the term מימרא, but seems to be more specifically focused on the idea of revelation. For discussion, see Ronning, Jewish Targums, 34-37. Further items of interest: (1) the site of John’s testimony, Bethany beyond the Jordan, is the area from which Israel, led by Joshua and the ark (thus also, “the Word,” in targumic thought), prepared to cross the Jordan to begin the conquest of Canaan (Josh 3:16); (2) John’s emphasis on the Spirt “descending and remaining” on Jesus answers to the dual nature of Jesus, since the Spirit was predicted to rest on the Messiah from “the stem of Jesse” (Isa 11:1–2; “descending” points to the divine Word, “remaining” points to the [human] son of David).

[5] In addition to the article and book cited above, see the author’s online paper: “When YHWH Became Flesh and Dwelt Among Us: John 1:14 as Programmatic for John’s Gospel”: https://www.academia.edu/7921022/When_YHWH_Became_Flesh_and_Dwelt_Among_Us_John_1_14_as_Programmatic_for_Johns_Gospel. 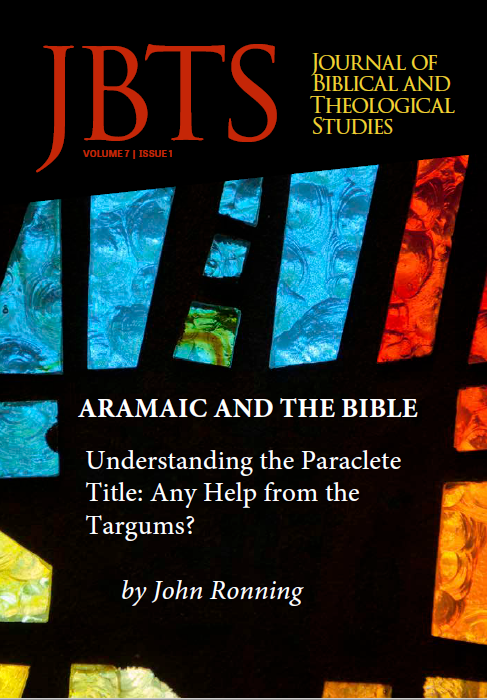