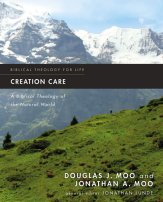 The book is aptly titled as it pursues a theology of creation that considers humankind’s relationship and duty to it. This is the fifth installment in the reputable Biblical Theology for Life series. This volume is divided into three major sections: “Queuing the Questions,” “Arriving At Answers,” and “Reflecting on Relevance.”

Chapters 1-2 begin by positing the question, “What role does non-human creation play in God’s plan?” (p. 23). The authors set out to prove that creation plays a significant role in God’s eternal plans. They thus eschew the labels “nature” and “environmentalism” in favor of “creation care” as a general summary of the biblical imperative. They disagree with the “‘typically instrumentalist’ view of nature: that the natural world exists solely to meet human needs” (p. 29). Instead, there is a biblical and gospel imperative to humans to care for the whole of creation. Chapter 2 lays out a thorough explanation of the biblical-theological method, which the authors ably employ.

Chapters 3-5 establish God as the creator who placed humanity on the earth to be its caretakers. Humanity’s goal is to bring their Creator glory and praise (p. 56). Chapter 5 develops this further, showing that this kinship between creation, creatures, and humankind is pictured within Yahweh’s land-gift to Israel and the nation’s duty to steward it on Yahweh the Creator’s behalf. Chapters 6-7 deal with the curse of creation while affirming its enduring goodness, a goodness which is ultimately grounded in the life and work of Jesus. Chapters 8-9 pair the story of creation within the broader story of a cosmic redemption, which is aimed at redeeming both humanity and creation. According to the authors, the New Testament universalizes Yahweh’s promises to Israel to include the whole earth (p. 138). Creation’s inclusion in the redemptive storyline is significant: creation will endure and is a central part of God’s redemptive plans. Because of this, humanity is duty-bound to care for the earth.

The concluding section begins with a restatement of the thesis: “Creation is not just the stage on which the story of redemption takes place; creation is a key actor in that story” (p. 171). As the authors pursue implications of their creation theology, they helpfully connect a concern for the flourishing of creation with a concern for the flourishing of one’s neighbors: “it is impossible truly to love others without caring for the environment in which they live” (p. 186). Chapter 13 presents data on five major crises in creation: loss of biodiversity, increase in the earth’s population, deforestation, ocean pollution, soil degradation, and climate change. The book ends with a call to preach about creation, spend time in creation, exercise moderation in the use of resources, and to pursue biblically-guided activism on behalf of creation and its inhabitants.

This volume exhibits an exemplary biblical and evangelical methodology that begins with the text and then moves to application. The authors’ ability to carefully elucidate the interconnectedness between mankind, creation, and God within Scripture provides strong warrant to their case that humanity cannot neglect creation. Humanity’s duty to creation is necessitated by several biblical factors: our joint purpose with it—to glorify the Creator; our mandate to love our neighbors and steward resources well for future generations; and its enduring goodness.

The enduring goodness of creation is demonstrated through careful exegesis of multiple passages. They zoom the argument in close to the text when needed while generally keeping the zoom at a broader level. The overall thesis is well-grounded and imbued with strong biblical warrant: God’s purposes for creation are present today and continue into eternity as God is seeking to establish “a new heavens a new earth” (cf. Isa 65:17). Creation’s eternal purpose necessitates humanity’s care of it.

Moo and Moo’s argument that creation will be transformed rather than replaced is compelling. They argue from 2 Peter 3:10 and Romans 8:21 that the earth will be “exposed” and “delivered” but not, as is commonly understood, destroyed by fire (pp. 147-161). Yet, they gladly defer to those who may hold to a more traditional replacement view. Throughout, they present a balanced argument that will hold universal, Christian appeal.

This universal appeal continues into the application. They cite multiple sources on the present state of creation—secular, scientific, philosophical, evangelical, and liberal—that substantiate their case and remains free of emotive rhetoric. The heartbeat of the book is chapter 13, where the authors’ present data on six major ecological crises. There is no doubt that the authors’ share the general concern about the earth’s welfare with the scientific community. The data presented appears verifiable and credible, thus justifying the authors’ concern. For example, they share the following about global warming: “There has not been, for example, a single year in the last forty years that was below normal [temperatures]” (p. 212). Paired with the other four crises, the authors make a credible case that the integrity of the earth’s natural systems are under serious threat (p. 217-218). The last chapter makes concise and practical suggestions for how Christians can stop contributing to the downward spiral of the compounding ecological crises and how Christians can aid in both preventing and remedying the current crises.

The one lingering concern is the authors’ understanding of the curse in Genesis 3:15-17. They argue that the curse does not “seem to represent … some sort of mysterious ontological change in the very makeup of creation itself” (p. 103). Instead, the creation’s curse is the cursed humans who care for it: “Yet, if we ask how God subjected creation to futility, we find that the only answer can be that God subjected creation to futility by subjecting creation to Adam and to all of humankind.” Despite the utmost respect for the authors, this argument degrades into special pleading that has at its heart a fine argument: that creation has enduring goodness despite the curse. The very point of Romans 8:19-22 is that creation’s experience of the curse is parallel to and like humanity’s experience of the curse. Humanity shares much blame for the current ecological crisis, but creation remains cursed, ontologically, as humankind is.

In the end, this “bump in the road” does not impede the overall and most excellent argument that Moo and Moo present. I heartily recommend this book to all scholars and believers. Moo and Moo have made a compelling case that care for creation is regularly neglected in Christian ethics and urgently needs to be resurrected.