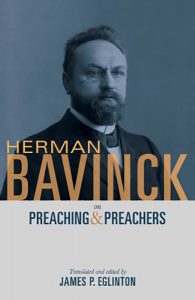 Often considered a standard text among theologians and preachers, Herman Bavinck’s Reformed Dogmatics reveal a careful dogmatician whose theological reflections brim with scrupulous insight and practical application. Though mainly known for the academic theology he championed at Kampen and the Free University of Amsterdam, James Eglinton (Ph.D., University of Edinburgh), the Meldrum Lecturer in Reformed Theology at New College, University of Edinburgh, offers readers insights into Bavinck the preacher. Eglinton, himself an accomplished Bavinck scholar, fills a glaring hole in the Bavinck corpus, for English readers know little of Bavinck’s pastoral theology or his approach to homiletics. As Eglinton notes, Bavinck preached for forty-two of his sixty-seven years, so it is surprising on many levels a study of this scope only now became available.

Readers will note quickly the uniqueness of Eglinton’s book, for Eglinton serves as both its translator and editor. In sum, this book consists of a biographical introduction followed by five translated sections. In the biographical introduction, Eglinton assists readers in discovering Bavinck the preacher, having preached his first sermon at twenty-four years of age in 1878, and he continued preaching across the world and in many settings until his 1921 death in Amsterdam. Critical to understanding Bavinck’s approach to preaching is his family upbringing, for he was the son of a Reformed pastor, as well as Bavinck’s ecclesial roots. Bavinck lived through tumultuous times of separation among the Dutch Reformed churches. And finally, Bavinck’s first pastorate, which he took shortly after completing his doctoral work at Leiden, formed his theological moorings, which grounded him to labor for a theology deeply tied to the church.

Much of what Eglinton translates in these sections comes from notes within Bavinck’s diary where he candidly expressed his ministerial anxieties. In this section, readers learn of Bavinck’s commitment to preach with little or no notes, which “explains why, despite decades of his preaching, only one of his sermons became available in print” (p. 11). Of all the highlights one encounters in this introduction, perhaps the gem is how Eglinton carefully shows a soft side to this great theologian who, readers learn, struggled with his singleness in his early ministry, even admitting that his pastoral duties would be easier if he had a wife with whom he could confide. Further, readers will note how Bavinck, as a young pastor, lamented that when one is a minister, one is “always a minister, and can never more speak in a properly familiar way” (p. 11). While this introductory biography is brief, because Eglinton wrote it as an angle into Bavinck the preacher, seasoned Bavinck readers will appreciate the new insights into his personality and early pastoral ministry.

Following the introductory essay, Eglinton provides five translated sections that begin with Bavinck’s forward to Eloquence. Bavinck wrote this brief forward in May 1901, and it is his attempt to explain the reasons behind his publication of Eloquence. “Dutch pulpits,” writes Bavinck, “are not presently overflowing with good, powerful speakers, never mind preachers” (p. 17). This reality is regrettable to Bavinck, who longs for a revival of a certain sort of preaching. The following chapter is Eglinton’s translation of Bavinck’s Eloquence, which was a lecture originally given to the students of Theological School in Kampen on November 28, 1889, and put in booklet form. There are several takeaways for seminary students or local church pastors in this carefully reasoned plea from Bavinck. Indeed, one can make present day applications with each of Bavinck’s concerns.

Bavinck believed all eloquence, “whether in the pulpit or in the council chamber, is actually threefold: argument, description, and persuasion. The eloquent person must know what he has to say, possess a solid knowledge thereof, and convincingly persuade the understanding of his hearers” (p. 32). Throughout each section of this treaty, Bavinck urges preachers to consider how the calling to preach requires even more of a commitment to the proper delivery mechanics and subject matter comprehension over and against all other subjects because of its Trinitarian hope and promise (see p. 37). Preachers proclaim a sacred message, and this solemn reality requires the attention and care Bavinck espouses.

In the next section, Eglinton translates “The Sermon and the Service,” which Bavinck first wrote in 1883. Readers will note quickly how Bavinck laments the powerless preaching in an age where there was tension and upheaval regarding orthodoxy among churches and the larger culture. Readers will perhaps relate to Bavinck’s brazen diagnosis of churchgoers’ motivation, their passivity in the church services, and their lack of sacrificial giving of themselves in service to the Lord Jesus Christ. A key remedy to the spiritual illness inflicting the church, for Bavinck, is a return to Holy Spirit anointed and Word-saturated preaching. He pointedly admits how “there is a lack of earnest preparation, simplicity and truth, pace and thought, faith and inspiration, and above all, solemnity and unction” (p. 63). He summons pastors to return to the Scriptures, and he calls upon them to seek the power of the Spirit to proclaim faithfully, boldly, and with simplicity of language.

The following section is the translation of Bavinck’s sermon, “The World-Conquering Power of Faith,” based on 1 John 5:4b and preached on June 30, 1901. Although this sermon is the only Bavinck sermon in print, readers will quickly appreciate his homiletical skills. Bavinck speaks with pastoral sensitivities and theological precision, and he acknowledges current events and challenges of his day all while using examples and illustrations from political elections in the Netherlands to war in South Africa. His sermon structure proves exegetically and theologically clear, and he ends with both an evangelistic appeal as well as a call for the church to be strengthened in its faith. For readers, this sermon provides an example of the preaching Bavinck called for in Eloquence.

In the final section, Eglinton translates “On Preaching in America,” which is Bavinck’s summary of his 1908 trip to America where he preached eighteen times. Bavinck gives a scathing summary of American Christianity. This section is brief, comprising just over three pages, and as such, Bavinck’s direct tone remains consistent. In his analysis of American churches, “the preaching mostly deals with morals,” and “preaching is not the unfolding and ministering of the word of God; rather it is a speech, and the text is simply a hook . . . Religion does not master the people; the people master the religion, just as they also master art and science. Religion is a matter of amusement, or relaxation” (p. 85). Further, Bavinck laments how, in his estimation, “the English-speaking world lives for the heathen and sympathizes with its missionaries” (p. 87). But Bavinck is equally critical of Dutch churches, finally offering hope for the Lord Jesus to be praised. This section ends with Bavinck’s hope that America will strive for its “own great and high calling” from God (p. 88). Finally, Eglinton includes as an appendix a translation of “On Language,” which is offered as a supplement to the reading of Eloquence.

Why should scholars, preachers, and seminary students indulge this helpful volume? First, scholars should read this volume because it gives evidence to how Bavinck believed robust dogmatic theology belongs in the pulpit as well as the classroom. His instruction on how best to deliver this content is still applicable. Further, Bavinck serves as a great example to modern scholars of how the academy is to serve the church, and reminders of this sort are too infrequent. Second, pastors should read this volume because Bavinck offers a goldmine of practical wisdom for the preached word. Sure, Bavinck is mainly known for his academic theology contained with the Reformed Dogmatics and other publications, but he began his ministerial career in the pulpit, not the ivory tower. Third, students should read this volume because every seminary student needs theological heroes from previous generations. Students desperately need the spiritual friendship that can only come by wrestling with the theological and practical works of the giants who have now been received into the joy of our master. Bavinck can be a lifelong friend to this next generation of God called men and women laboring in the seminary classroom. Regardless of one’s faith tradition, this book belongs on the pastor’s shelf. 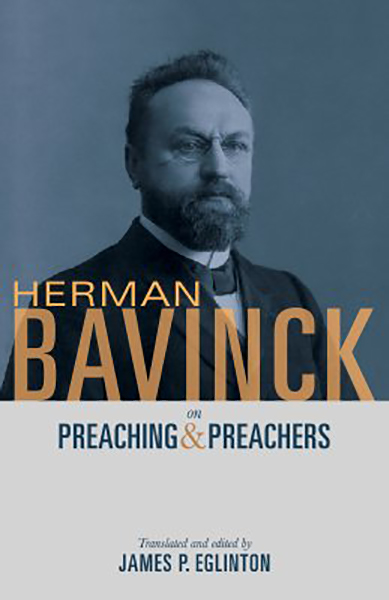