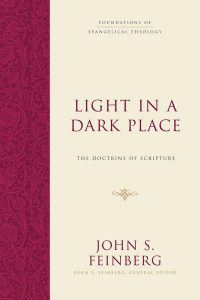 In Light in a Dark Place, John S. Feinberg (professor of biblical and systematic theology at Trinity Evangelical Divinity School) offers a comprehensive, evangelical treatment of the doctrine of Scripture. Feinberg was one of the original signatories of the Chicago Statement on Biblical Inerrancy in 1978. He is the general editor of Crossway’s Foundations of Evangelical Theology series, to which the present volume is the most recent contribution.

The book consists of four parts and twenty chapters. The title of each chapter (apart from the introduction) refers to Feinberg’s chosen metaphor of “light”. This recurring motif reflects the author’s conviction that the Bible is inscripturated divine “revelation light” for the sake of a dark world (p. 24).

Part One on “Creating Scripture” treats the doctrines of revelation (general and special) and inspiration. Part Two on “Characteristics of Scripture” covers inerrancy and authority. Part Three (“Setting the Boundaries”) is about canon. Part Four on “The Usefulness of Scripture” has chapters on illumination, perspicuity, animation, sufficiency and preservation. A concluding chapter takes the form of the author’s testimony.

Feinberg’s aim is that his work should reflect, and express, an evangelical consensus. This aim is achieved partly by confining his arguably more debatable views (e.g. his pre-millennialism and belief in a pre-tribulational rapture) to footnotes, and partly by explicit statements that certain of his commitments (e.g. to a broadly Reformed soteriology and account of human freedom) do not materially affect his doctrine of Scripture.

Feinberg writes as a conservative evangelical, and most of his references are to fellow (American) evangelical writers, although he does interact with non-evangelical scholarship, particularly as he considers challenges to his views on revelation, inspiration, canon, and inerrancy. The book also contains extended critical reviews of works by evangelicals who have in different ways challenged Scripture’s inerrancy. Feinberg writes of the latter as those “who call themselves evangelical” (p. 115, 231). As this suggests, any “evangelical” consensus on Scripture may not be forthcoming!

In a review of this length, it is of course impossible even to lay out the broad contours of Feinberg’s systematics. Instead, I will briefly introduce his methodology, comment on some notable (on occasion idiosyncratic) points, and then offer a summary evaluation.

Feinberg’s method, in respect of any theological question, is first to ask what Scripture says. His book is therefore full of detailed exegesis of relevant biblical passages. In formulating doctrine, Feinberg favours Scripture’s didactic statements over Scripture’s “phenomena”. This is particularly significant when it comes to his defence of the inspiration and inerrancy of Scripture because Feinberg argues (against what is commonly asserted) that whether one starts with didactic statements or with phenomena, “proper theological method involves a combination of both inductive and deductive investigation” (p. 114). Feinberg’s conclusion is that Scripture teaches its own plenary, verbal inspiration, which is not accomplished by mechanical dictation.

Feinberg’s defence of inerrancy (he adopts his brother Paul Feinberg’s definition of the term, and works from the correspondence theory of propositional truth) is extremely thorough. He prefers not to use the term “infallibility”, although to the mind of this reviewer his criticism of Vanhoozer’s use of the latter term (pp. 269-73) is not wholly convincing, partly because Feinberg seems to think that a given (divine) illocutionary act can only have one intended perlocution in view, a claim that I do not think can be sustained.

In Light in a Dark Place, Feinberg mostly presents views that would probably be accepted as mainstream by most conservative evangelicals, but occasionally he offers a minority report. Interesting examples include his reservations about the doctrine of accommodation (p. 205, 325), his distinct lack of enthusiasm for an incarnational analogy to explicate the divine and human aspects of Scripture (p. 224), and his application of the concept of illumination to unbelievers as well as believers (p. 617). Chapters on animation and preservation are welcome additions to this book which do not often feature in systematic theologies of Scripture.

In his discussion of the doctrine of revelation, Feinberg is critical of models of revelation that introduce the appropriation of revelation into the concept itself. This point seems to be particularly important in a context when certain evangelical writers have followed Barth by, in effect, equating revelation with reconciliation. In Feinberg’s idiom, “[t]hough humans repeatedly sin in the face of the truth, God has never turned off the light” (p. 53). However, Feinberg insists, a commitment to the objectivity of revelation must be balanced by an avoidance of “an overly static view” by which theologians may “lock God out of the world” (p. 41). Feinberg’s balance at this point goes some way towards addressing the concern of those who insist that Scripture’s ontology must be understood in terms of the ongoing acts of God.

Some of Feinberg’s exegetical conclusions are striking: in respect to Romans 1, for example, he thinks that Paul might not mean that natural revelation leads to monotheism (p. 70). This is actually a fine example of Feinberg’s exegetical (and theological) restraint, in evidence throughout. He repeatedly insists that we may not press a text or a doctrine to say or do more than is warranted, even if (perhaps especially if) the result would suit our own purposes.

The book is attractively presented, although the footnotes are in very small type, and at times the distinction between levels of headings is not clear, which can make following the argument more difficult. There are some curious claims made in the book. Feinberg writes that “[m]any of Jesus’s contemporaries saw the risen Christ and still refused to believe” (p. 81) but this claim is not substantiated. His inclusion of “incandescent” as an example of a negative term like “inerrancy” (p. 236) is baffling.

This book would be a hefty-but-helpful introduction to the doctrine of Scripture for evangelical students. It may not convince many who do not agree with its conclusions, especially on inerrancy, but the cumulative force of its arguments certainly demands attention, and Feinberg sweeps away many a straw man to lay down a cogent and precise case for would-be opponents. Feinberg has not interacted with some of the best recent Reformed evangelical scholarship on the doctrine of Scripture (John Frame and Meredith Kline are conspicuous by their absence and their work would surely have helped Feinberg to make his case on authority and canon, respectively). Nor does Feinberg offer any discussion of the work of John Webster, without doubt one of the most significant and provocative contributions on the doctrine of Scripture in this century from a professing evangelical (with Barthian leanings). No doubt Feinberg would part company from Webster at many points, but the lack of any discussion of Webster’s Trinitarian paradigm and actualistic ontology of Scripture is regrettable, and may mean Feinberg will fail to gain a hearing among one constituency he might just be able to convince.

At times Light in a Dark Place feels a little dated (for example, the assertion that Pete Enns continues to hold to inerrancy, when a visit to Enns’s personal website confirms that he has denied inerrancy for some time) but this feeling (it is no more than that) may merely reflect the fast-changing landscape in respect of the doctrine of Scripture today in “broader” evangelicalism and beyond. On the flipside of this, Feinberg’s “elder statesman” status lends his work the gravitas of one who has “seen it all” when weighing his more recent conversation-partners.

Feinberg writes as one who loves Scripture, and who believes his convictions about it matter. At times, he is excited (six consecutive exclamations on p. 660!) and this book is full of pastoral counsel and application, clearly derived as much from the author’s own experiences (detailed in the conclusion) as from his dogmatics. Light in a Dark Place will likely become a standard evangelical textbook on a doctrine (and above all, on a Book) which has defined its author’s life story. 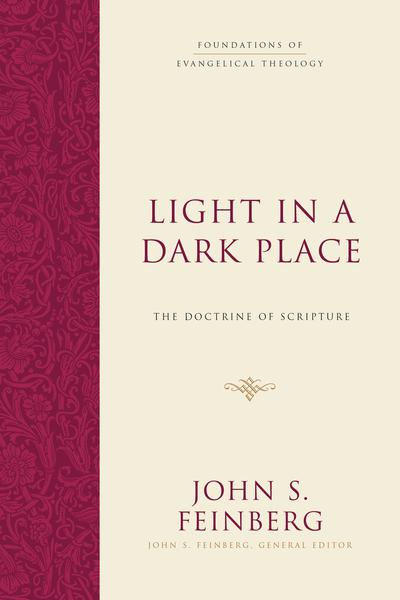