Boyd, Gregory A. The Crucifixion of the Warrior God: Interpreting the Violent Old Testament Portraits of God in Light of the Cross. Minneapolis, MN: Fortress Press, 2017, pp. 1,492, $59.00, paperback. 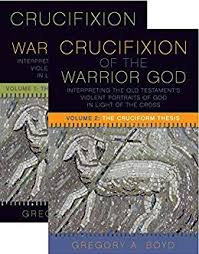 Christians are largely united in the affirmation that Jesus Christ is the supreme revelation of God’s character given to humans, whose person and works fulfill the highest aspirations of the Old Testament (OT). Christ reveals a God who teaches us to love our neighbors as ourselves and shows us how to love by dying an undeserved criminal’s death not only for those who return his love but also for his enemies. However, this picture of a perfectly loving God appears to be incompatible with the brutally violent images of Yahweh found in the OT. Among other things, the OT command to kill every man, woman, and child in a given region plainly seems to contradict Jesus’ teaching to love all persons, even one’s enemies, as oneself. The 1,500 page tome, The Crucifixion of the Warrior God: Interpreting the Violent Old Testament Portraits in Light of the Cross, from pastor-theologian Gregory Boyd aims to reconcile, or at least refocus, these opposing visions of God. In short, the proposal is that, initial appearances notwithstanding, the violent OT depictions of God indirectly reveal God’s cruciform love.

Before defending his vision as to how the violent OT depictions of Yahweh indirectly reveal God’s cruciform love, Boyd argues against competing treatments of the problem of contradictory portrayals of God. Among the most prominent are the dismissal solution and the synthesis solution. Advocates of the dismissal solution claim that texts which portray God as violent are not the product of divine inspiration, and so need not be affirmed. Boyd rejects the dismissal solution principally because the NT presents Jesus as affirming the OT as divinely inspired and worries that such a path will lead to the rejection of large swaths of the OT (e.g., the flood, the destruction of Sodom and Gomorrah, the killing of the Egyptian firstborn, the downing of Pharaoh’s army in the Red Sea, the conquest of Canaan, and the divinely orchestrated attacks of Assyria and Babylon against the Israelites), leaving it unclear as to whether a coherent narrative would remain. Boyd also argues that there is good reason to maintain that Scripture is infallible, which implies that the disturbing bits of Scripture cannot merely be dismissed.

For such reasons, many conservative theologians opt for the synthesis solution. This is the solution wherein one seeks to justify the violent OT portraits of God by showing that they are compatible with the God of love revealed in Christ. Defenses of the synthesis solution include the notion that humans are not appropriately epistemically situated to judge the moral quality of Yahweh’s actions, that God’s holy righteousness entails that he must punish sin in ways that are jarring to human sensibilities, that Yahweh must engage in violence to ensure the instantiation of certain greater goods, and that Yahweh’s brutal behavior is an act of accommodation to the limitations of human sin and stage of moral development. Boyd ably dismantles each of these synthesizing justifications for divine violence, although the last of them plays a significant role in his own constructive proposal.

Because Boyd believes that the violent scriptures concerning God can be neither dismissed nor justified, Boyd calls us to reinterpret violent scriptures concerning God in light of God’s most supreme self-disclosure, namely, the self-giving divine love found in the crucifixion. This Boyd dubs the Cruciform Hermeneutic, a hermeneutical principle that Boyd defends extensively and which drives his entire reinterpretative project.

At first blush, the reinterpretative approach might seem radically novel. However, Boyd reminds us that this basic procedure can be found in Justin Martyr, Irenaeus, Origen of Alexandria, Gregory of Nyssa, and John Cassian, among others. To varying degrees, these church fathers maintained that violent OT portraits of God should be reinterpreted in light of Christ, and for them this meant using allegorical interpretation to render disturbing passages compatible with Christian revelation. While Boyd rejects the allegorical approach as not sufficiently grounded in history, he maintains that these early Christian theologians were moving in the right direction.

The implementation of the Cruciform Hermeneutic is taken by Boyd to generate what he calls the Cruciform Thesis, a thesis which is comprised of four dimensions. First, there is the Principle of Cruciform Accommodation, which takes cues from the idea that on the cross God stooped to accommodate fallen humanity by bearing the curse of human sin, thereby exemplifying the ugliness of the fallen human condition. This accommodational divine reality leads Boyd to submit that we should expect to find God assuming literary appearances that reflect the ugliness and sinfulness of God’s people. And this, Boyd argues, is what God does with many of the “sub-Christlike” portraits of him in Scripture. According to the Principle of Cruciform Accommodation, God has accommodated his revelation to the fallen, culturally conditioned values of the ancient Near East, even to the point of allowing Scripture to depict him in tribal, warring ways.

The second principle of the Cruciform Thesis is labeled the Principle of Redemptive Withdrawal. This is the principle that God punishes by withdrawing his protective presence from sinners as opposed to placing external penalties on them. On this conception, punishment by withdrawal always has redemption as its ultimate goal, not that which is carried out for the sake of mere retribution. The Principle of Redemptive Withdrawal reflects the cross in that there Jesus experienced the consequences of human sin, not from the violent actions of the Father, but by the Father’s withdrawal for the sake of redemption. While various OT authors might attribute violence to God, the principle at issue encourages us to see whatever violence that transpires as the mere byproduct of Yahweh’s withdrawal rather than something that God specifically intends.

The third principle, the Principle of Cosmic Conflict, builds on the second. It is the principle that there are malevolent spiritual agents at work, which, in conflict with God’s heavenly hosts, bring damage and destruction to terrestrial beings when God withdraws his protective presence. In Boyd’s view, the Principle of Cosmic Conflict reflects the crucifixion because it was the dark forces who orchestrated the brutal execution of Christ.

Finally, there is the Principle of Semiautonomous Power. According to this principle, when God assigns supernatural power or authority, God does not control how that authority is used. Indeed, agents may use that authority in ways in which God despises. By implication, when a prophet uses his God-given powers in violent ways, we cannot assume that God affirms the violent behavior. Supposedly, the Principle of Semiautonomous Power is represented in the fact that Jesus at least believed that he could use the divine authority granted to him to contravene the Father’s will.

Taken together, these principles are said to help Christians reinterpret violent OT passages in a manner that allows for a coherent, Christlike image of God. Boyd’s case for this conclusion is thorough and multifaceted and in certain places convincing. Nevertheless, many readers of Boyd’s book will be left unpersuaded by the overarching Cruciform Thesis. Perhaps most centrally, many will find it difficult to believe that God has inspired large swaths of the OT that do more than inadequately grasp or even distort the character of God; they present God in ways that God, in Boyd’s view, entirely detests.

But, persuaded or not, Boyd’s book is a great achievement. It is well-researched and weaves together various fields of study on behalf of an original theological proposal that promises to advance insight into one of the most intractable problems affiliated with the Christian faith. The Crucifixion of the Warrior God is must reading for all who want to understand how violent OT texts bear witness to the God who died for humanity out of love.