Gayle Doornbos (PhD, University of St. Michael’s College) is an Associate Professor of Theology at Dordt University. She has also taught in Calvin Theological Seminary’s distance program. She lives in Sioux Center, IA. 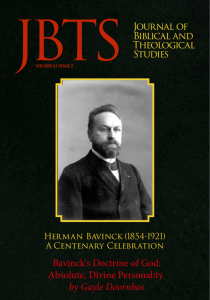 Recent scholarship, however, has started to gesture in a different direction. Following James Eglinton’s re-interpretation of Bavinck’s organic motif as rooted in the doctrine of the Trinity, Cory Brock and Nathaniel Gray Sutanto have both indicated that Bavinck’s doctrine of God might contain more originality than previously thought, particularly Bavinck’s predication of God as ‘absolute personality.’ In Sutanto’s, God and Knowledge, he notes,

If there is a potential and modest point of uniqueness in Bavinck’s treatment of theology proper (outside of the organic motif and characterization of reality in light of God’s triune being), it is Bavinck’s predication of the divine being as the ‘absolute personality’ in response to modern theology’s emphasis on the psychological depth that attends talks of personality.[8]

While both Brock and Sutanto gesture towards a potentially unique and unexplored aspect within Bavinck’s doctrine of God, both are brief and modest. Modest in that neither suggests that Bavinck’s predication of God as ‘absolute, divine personality’ is indicative of a radical shift away from Bavinck’s development of a Reformed, historic, and creedal doctrine of God. Brief in that both gesture to this element with Bavinck so quickly that if their treatments of Bavinck were like marvel movies, ‘absolute personality’ would be considered something like a Stan Lee cameo: important but easy to miss. The lack of in-depth study is understandable given the scope and aim of their projects, but it is unfortunate because the lack of investigation leaves readers thinking Bavinck used the term ‘absolute personality’—a favorite of nineteenth-century theistic personalists—when he specifically uses the phrase absolute, divine personality (absolute, Goddelijke persoonlijkheid).[12] It also identifies Dorner as Bavinck’s potential source for this predication without further investigation. However, even if they do not explore Bavinck’s attribution of ‘absolute, divine personality’ to God in-depth, they do (rightly) indicate that previous scholarship may have missed important elements within Bavinck’s doctrine of God—particularly in relation to Bavinck’s sources, Bavinck’s utilization of modern theological and philosophical grammar, and whether or not Bavinck’s use of modern theological grammar is indicative of substantial developments within his doctrine of God, merely restating classical doctrines in modern dress, or something in-between.

This essay seeks to fill this gap in Bavinck studies by exploring three pertinent aspects of Bavinck’s utilization of ‘absoluteness’ and ‘personality’ in his doctrine of God proper including his predication of God as ‘absolute, divine personality.’ In doing so, it will seek to show—as Sutanto and Brock have suggested—that this aspect of Bavinck’s thought represents a creative appropriation of modern philosophical concepts from within his classical, Reformed tradition in order to develop it in and for the context of modernity. It will do this by focusing on (1) situating Bavinck’s doctrine of God within the context of the nineteenth century the philosophical debate concerning absoluteness and personality, (2) identifying a few key places where Bavinck seeks to reconcile absoluteness and personality in his development of theology proper within the Reformed Dogmatics; and (3) pointing towards why this area of Bavinck studies is a fruitful area for future study.

[1] The material for this article is a combination of a paper given for the Advanced Theological Studies Fellowship at Kampen Theological University and the author’s doctoral dissertation. The materials have often been altered for the sake of this paper. See Gayle Doornbos, “Absolute Divine Personality: Herman Bavinck and Isaak A. Dorner’s Doctrines of God,” Advanced Theological Studies Fellowship, June 2019,” and Gayle Doornbos, “Herman Bavinck’s Trinitarian Theology: The Ontological, Cosmological, and Soteriological Dimensions of the Doctrine of the Trinity” (PhD Dissertation: University of St. Michael’s College, 2019).

[3] The main thrust of this author’s dissertation was to explore this area of Bavinck’s thought. Several aspects of this article are derived or taken from the dissertation. See Gayle Doornbos, “Herman Bavinck’s Trinitarian Theology.”

[9] Besides Sutanto and Brock, there is only one other writer who has mentioned Bavinck’s treatment of absoluteness and personality in a significant way: Henry Jansen. In his book, Relationality and the Concept of God, Jansen notes that Bavinck talks about God “as Absolute and as personal.” See Henry Jansen, Relationality and the Concept of God, (Amsterdam: Rodophi, 1995), 48.

[11] Brock, “Orthodox yet Modern,” 55–6. Brock notably leaves this claim out of the published version of his dissertation.

[12] Bavinck’s exact phrasing is: “Absolute, Goddelijke persoonlijkheid.” Herman Bavinck, Gereformeerde dogmatiek, Deel 2 (Kampen: J. H. Bos, 1897), 275. Bavinck’s first edition of his second volume will be referenced as GD for the remainder of this paper. His second, revised edition will be referenced using the English transition of that edition. 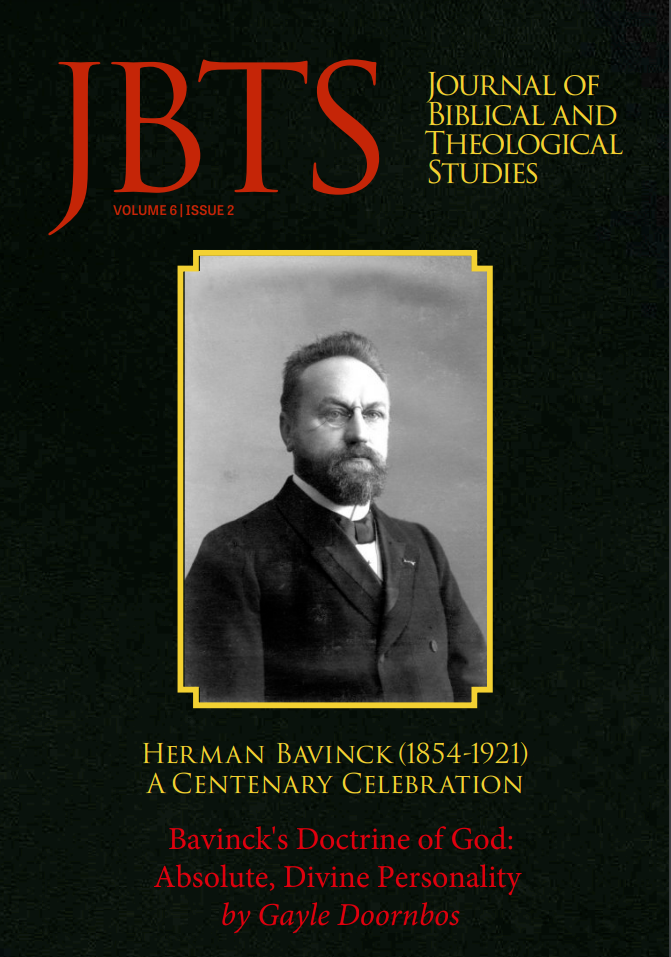