Encyclopedia Bavinck: The Case of the History of the Theological Encyclopedia

Gregory Parker Jr. is a Ph.D. student in Systematic Theology at the University of Edinburgh, New College, Mound Place, Edinburgh, UK. He is a co-editor and co-translator of Herman Bavinck’s The Sacrifice of Praise (Hendrickson, 2019) and Guidebook for Instruction in the Christian Religion (Hendrickson, 2022). 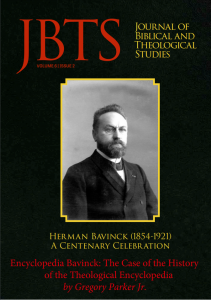 A familiar scene in the kids’ books Encyclopedia Brown is the arrival home of the befuddled chief of police, Mr. Brown. He is troubled by a case. His son Leroy “Encyclopedia” Brown takes up the case that is puzzling his father. The cases are often worked out on account of some sort of wide-ranging trivia type knowledge that Leroy has gathered. “Encyclopedia” Brown’s encyclopedic knowledge is how he garnered his nickname. In modern parlance this is often how we think of the encyclopedia. It is a distended dictionary of sorts, swelling with far too much information. Alternatively, many think of the Encyclopedia Brittanica sitting somewhere in their parent’s homes sold to them by a travelling salesman years ago. This picture or understanding of the encyclopedia as strictly a set of information is novel to the twentieth century.[1]

Zachary Purvis argues that, in the late eighteenth and ninteenth century, the theological encyclopedia was viewed as a “living” apparatus. It was a way for theologians to envision how the various components of theology related to one another. The issues of the organization of knowledge, the unity of theology’s various parts, and theology’s relationship to the rest of the traditional faculties were all problems facing theology. In Germany the collective name for these problems was the theological encyclopedia (theologische Enzyklopädie).[4] The same issue was prevalent in Dutch universities and the same theological tool was being utilized.[5]

Nineteenth century Dutch theologian and contemporary of Herman Bavinck’s (1854–1921), Abraham Kuyper (1837–1920), argued that the Encyclopedia was a systematic way of considering how various sciences related to each other. He wrote, “The idea of system became the chief aim in Encyclopedia; and from the material of each science so much only was taken as was necessary for the proper understanding of its organic life.”[6] In this manner, the encyclopedia became its own independent science. The idea of the encyclopedia, therefore, presupposed a relationship between the various parts of knowledge and strove to understand how they organically connect to each other.[7] It is this organic relationship which the encyclopedia investigates. For Kuyper, the encyclopedia was formed by first classifying the various areas of human knowledge, then burrowing down to collect the treasure of those various sciences. This was followed by placing these issues within the individual departments in relation to themselves. And, finally, all the various sciences are tied together so that the whole of science can be viewed in its organic unity.[8]

In the first phase Bavinck inspects the early church for clues of the development of the theology and theological encyclopedia. In this initial stage, Bavinck perceives little development of encyclopedia. Although in germ the fourfold structure that is present in Bavinck’s mature theology is identified as present. In the middle age’s theology matures into a science. This development fosters both internal structure and external relationships. Bavinck gives the briefest attention to this time period.

In the second phase we will look at how the Reformation impacts the development of the theological encyclopedia up until the arrival of Schleiermacher. In the reformation Bavinck perceived a development of the theological encyclopedia alongside of the changing curriculum scene in Universities and the historia literaria (literary history). On account of the Reformation his analysis splits into a tri-part division: Rome, Lutheran, and Reformed. He gives little attention to Rome. For Lutherans another important thread is identified with Johann Gerhard’s Methodus Studii Theologici whom desired for theology to develop theologically. Bavinck’s own reflections on theology follow this path. Finally, while inspecting the Reformed Bavinck identifies five trends. Importantly, one can envision Bavinck’s own four-fold theological encyclopedia as following the Reformed tradition.

In the third phase Bavinck identifies the main problem with the theological encyclopedia in the wake of Schleiermacher, that is it has allowed philosophy to take center stage. This is the case that Bavinck’s theological encyclopedia seeks to solve. In the final analysis Bavinck suggests all modern encyclopedias as having this problem. Bavinck attempts to correct this line of thinking by returning theology to its proper location. In light of our synopsis of Bavinck’s theological encyclopedia is any further clarity brought to orienting Bavinck’s relationship to orthodoxy or modernity?[15] A historical perspective will pay dividends in our understanding of Bavinck’s own encyclopedic writings and will allow us to see how Bavinck positions himself in relation to the tradition and his intellectual milieu. What we will find is a Reformed catholic thread in Bavinck’s encyclopedia and an appropriation of modern grammar to overcome the problems he identifies. Special attention is paid here to Schleiermacher and Hegel.

Read the full article here: Encyclopedia Bavinck: The Case of the History of the Theological Encyclopedia

[1] In fact, it is the kind of encyclopedia Bavinck hoped would not develop for it would present knowledge atomistically. See Nathaniel Sutanto, God and Knowledge: Herman Bavinck’s Theological Epistemology (London: Bloomsbury T&T Clark, 2020), 97.

[2] For an expansion on the importance of the theological encyclopedia in nineteenth century theological thought, see Zachary Purvis, Theology and the University in Nineteenth-Century Germany (Oxford, UK: Oxford University Press, 2016).

[5] Eglinton, Bavinck: A Critical Biography, 86, 103; Joris van Eijnatten, “History, Reform, and Aufklärung: German Theological Writing and Dutch Literary Publicity in the Eighteenth Century,” Journal for the History of Modern Theology/ Zeitschrift für Neuere Theologiegeschichte 7, no. 2 (2000): 174. Van Eijnatten argues German theological writings were commonly and popularly translated and read in the Netherlands in the second half of the eighteenth century.

[6] Abraham Kuyper, Encyclopedie der heilige godgeleerdheid, 3 vols. (Amsterdam: J.A. Wormser, 1894); portions of Kuyper’s Encyclopaedia are in English, as Encyclopedia of Sacred Theology: Its Principles vol. 2, trans. J. Hendrik de Vries (New York: Scriber, 1898); Kuyper, Encyclopedia of Sacred Theology, 10; James Eglinton, “The Reception of Aquinas in Kuyper’s Encyclopaedie der heilige Godgeleerdheid” in The Oxford Handbook of the Reception of Aquinas, (Oxford: Oxford University Press, 2021), 455. Eglinton puts forth a very clear summary of Kuyper’s encyclopedia project: “In the full-length original, volume 1 provides Kuyper’s retelling of the history of theology’s emergence as a distinct science. Volume 2 contains Kuyper’s constructive account of theology as an organized form of the knowledge of God. This is followed, in volume 3, by a distinctively Kuyperian application of the principle of theology as science, namely, that other sciences should be ‘Christianized’ by theology, leading to the creation of Christian philosophy, Christian literary studies, Christian art, Christian natural sciences, and so on.”

[10] Ximian Xu’s dissertation is the only sustained interaction with the encyclopedic sources in English. Ximian focuses on the dissonance between Kuyper and Bavinck’s understanding of the theological encyclopedia in relation to their differing starting points. My own dissertation hopes to draw more attention to Bavinck’s theological encyclopedia. Ximian Xu, “Theology as the Wetenschap of God: Herman Bavinck’s Scientific Theology for the Modern World” (PhD diss. University of Edinburgh, 2020).

[13] No. 217, Archive of Herman Bavinck, §2, 9(“Sedert Schleiermacher”); Kuyper’s Encyclopedia of Sacred Theology: Its Principles, I, 54–475.  These three periods are similar to, but distinct from Abraham Kuyper’s threefold division of (1) Up till the Renaissance, (2) From the Renaissance to the New Philosophy, and (3) The New Philosophy.

[14] No. 187, Archive of Herman Bavinck, §3. Rather than beginning with the development of Scripture it begins with Origen.; No. 217, Archive of Herman Bavinck, §2. In the margins he does list an alternative fourfold historical division: (1) development of the canon, (2) dogmatic period, (3) growth of pietism and rationalism, (4) eighteenth century between orthodoxy and piety; rationalism and super-rationalism.

[15] Cory Brock, Orthodox yet Modern: Herman Bavinck’s Use of Friedrich Schleiermacher (Bellingham, WA: Lexham Press, 2020). This is not intended to reintroduce a binary in Bavinck scholarship, but rather to more closely consider Bavinck’s relationship to both. 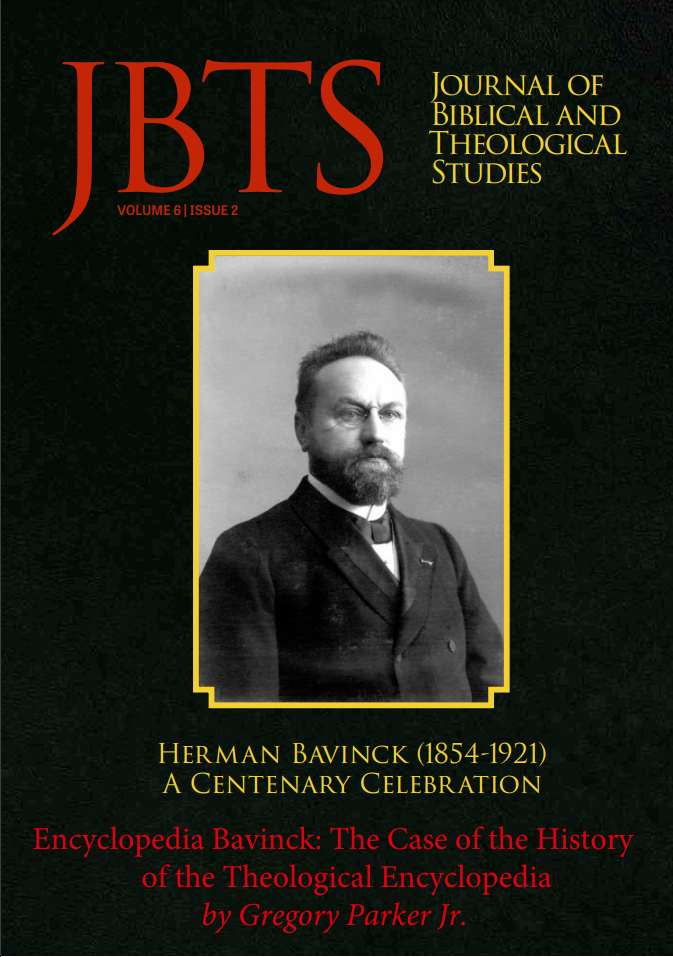