John Webster (d. 2016) is celebrated as one of the greatest English-speaking systematic theologians of his generation. This Companion, introduced by the publisher as “[a]n overview and analysis of John Webster’s  seminal contributions to Christian theology” (dust jacket) is both a handbook for readers of Webster himself, and a set of gently critical interactions with Webster’s theology which lay down paths for potential future theological work in Webster’s  wake. The editors (who, between them, also contribute a preface, four chapters, and an epilogue) have assembled a highly qualified group of contributors made up largely of Webster’s former academic colleagues and students. 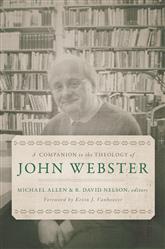 The Companion consists of seventeen chapters, plus a foreword by Kevin J. Vanhoozer and an epilogue by R. David Nelson. There is also a useful bibliography of published works by Webster, which brings up to date the list that previously appeared in Webster’s 2015 Festschrift, Theological Theology. (This list is still incomplete, lacking the important chapter by Webster, “The Service of the Word: Theological Reflections” in the 1997 co-authored booklet, What Happened to Morning Prayer?, although this work is mentioned on p. 260, n. 46.)

Three of the chapters are revisions or reprints of previous publications: Ivor Davidson’s biographical and personal tribute (chapter 1), and two of the three essays by Michael Allen, on “Theological Theology: Webster’s  Theological Project” (chapter 2) and “Anthropology” (chapter 12): all the rest are original chapters for this volume. The Companion is in two parts. Part I is on “Webster’s  Theological Development”, and contains the aforementioned chapter by Allen on “Webster’s  Theological Project”, “Webster on Eberhard Jüngel” (R. David Nelson), “Webster on Karl Barth” (Kenneth Oakes), “Webster on the Theology of the University” (Martin Westerholm), and “Webster’s  Theological Exegesis of Christian Scripture” (Matthew Levering). Part II, “John Webster on the Theological Topics”, includes chapters on “Scripture” (Darren Sarisky), “Reason” (Michael Allen), “The Triune God” (Fred Sanders), “The Perfection of God” (Christopher R. J. Holmes), “Creation” (Justin Stratis), “Anthropology” (Michael Allen), “Jesus Christ” (Katherine Sonderegger), “Salvation” (Ivor Davidson), “The Church” (Joseph L. Mangina), “Metaphysics” (Tyler R. Wittman), and “Ethics” (Paul T. Nimmo). The book is helpfully structured so that many of the chapters in Part II reflect on diachronic developments, following the broad outlines of that development charted in Part I. For example, one of the finest short summaries of Webster’s well-documented turn from the influence of Barth towards Aquinas in his later work comes in Christopher Holmes” chapter in Part II (p. 168).

This book will serve a variety of audiences well. For the reader who comes to the Companion with little or no previous experience of reading Webster himself, it should be both a useful orientation and a spur to read Webster’s own work. A number of the chapters reflect such heavy influence of Websterian turn of phrase that they begin at times to read like Webster himself rather than as commentary or critique. Readers new to Webster are thus primed to expect certain emphases and not to be caught off guard by Webster’s particular style and approach. While, on the one hand, new readers should anticipate the bracing experience of encountering “earnest and conspicuous notes of joy” (p. xix) in Webster’s  theology, there may also be challenges since, for example, “[r]eading Webster is like going back in time” (p. 183), a nod to his Protestant-inflected ressourcement. Contributors are therefore at pains to help us read Webster rightly, so that we avoid “apprais[ing] his work in lopsided or eagerly schematic fashion” (p. 17). A further aim is that (as Webster himself desired) we might be led from reading Webster himself to reading his primary sources—Holy Scripture and the great texts of the Christian tradition. Above all, a repeated theme in the Companion is that reading Webster ought to lead us to the contemplation of God himself and to growth in our discipleship as creatures called into fellowship with God by his grace.

As indicated above, a particular practical help to new readers of Webster is Part I’s focus on theological development. This serves as an invaluable guide to “locating” Webster’s writings in the appropriate stage of his career. For example, the recently published The Culture of Theology (2019) is actually a re-publication of a lecture series that Webster gave in 1998. These lectures are significantly different, both formally and materially, from Webster’s later work, such as the essays in the two volumes of God Without Measure (2015). An appreciation of context and development is essential to correctly interpreting Webster in this case. At the same time, some contributors note that we should also focus on the “profound continuities” that might be eclipsed by an over-zealous periodization of Webster’s theology (p. 140). This is a helpful corrective.

Some of the chapters in the Companion are easier than others to approach without prior knowledge, whether of Webster himself or of particular doctrinal or philosophical areas of interest. For example, this reviewer found Wittman’s chapter on “Metaphysics” one of the most challenging in the book, doubtless partly due to a lack of specifically philosophical training. Along these lines, it might have been helpful to offer a suggested order for reading Webster suited to new readers. That is because Webster’s  own oeuvre ranges from the relatively easy to access (such as his sermons or the monographs Holy Scripture and Holiness) to his comparatively complex interpretive work on Jüngel and Barth (which demands some familiarity with these theologians) and other pieces that require a more robust philosophical apparatus.

The student who is already basically conversant with Webster’s  theology will also find much of great interest and enjoyment in these chapters, not least repeated encouragement to go beyond a “basic” Webster canon of his collected essays collections and the monographs mentioned above to include his published sermons and other, less celebrated, essays or even audio recordings. While most of the chapters in the Companion follow what have already become well-worn lines in Webster interpretation, some are distinctly fresh. In this latter category are Matthew Levering’s fascinating piece on “Webster’s Theological Exegesis of Christian Scripture”. This chapter is almost an apologetic directed towards the criticism often levelled at Webster that, despite his own exhortations to the contrary, he did not spend enough time on actual biblical exegesis. The chapter contains an analysis of Webster’s use of Scripture in Holiness, and concludes that there is a significant “cumulative impact” of Webster’s biblical citation which amounts to a more important exegetical contribution than that for which he is often given credit (p. 111). Doubtless debate in respect of this question will continue, but Levering has certainly offered us an intriguing case.

The other truly “fresh” chapter in this volume is the epilogue by R. David Nelson, entitled “Course Charted but Not Taken”. This 18-page finalé is as significant as any of the others chapters in the book, not least because it makes available in published form for the first time sections of Webster’s  own proposal for his Systematic Theology, a projected 5-volume work which was never realized due to his untimely death. Nelson’s own personal and professional investment in this project means he is clearly the best person to situate and explicate this proposal. It is regrettable that we will likely not see the multiple drafts of Webster’s first volume, but Nelson’s epilogue goes some way to helping us understand the contours of the entire project as it might have materialized.

Indeed, it is a common feature of many of the chapters in the Companion that they leave readers with a variety of “courses charted but not taken” by John Webster, and the encouragement to pursue some yet unresolved questions or to take up Websterian resources in our theological labors. For example, Michael Allen argues that we need to “move beyond Webster” even as we learn from him in our account of human creatureliness (p. 145). Not many of the chapters offer sustained criticism, but there are exceptions, even when the authors are broadly positive in their evaluation. For example, Darren Sarisky observes rightly that the “lingering challenge of dualism” remains in Webster’s doctrine of Scripture (p. 130). In Webster’s  bibliology, “the description of Jesus in relation to the creaturely realm makes it appear that the mundane features of the [biblical] text can be of no more than marginal pertinence to how it communicates”: as Sarisky concludes, “this is a real problem” (p. 129). Another significant example of criticism (albeit framed with the reticence of the subjunctive mood!) is found at the end of Paul T. Nimmo”s excellent chapter on “Ethics”. While most of the contributors to this book seem to stand with the later Webster in his commitments to beginning theological science with God a se, and rejecting a Christologically-defined doctrine of God, Nimmo is one Webster interpreter who has registered unease with the latter’s move from a Barthian to a more “scholastic mode of thinking” in the final phase of his career (p. 296). For Nimmo, the later Webster (at least possibly) “precludes allowing the person of Jesus Christ to be sufficiently determinative of the understanding of God and of human beings; […] risks eliding a more dynamic and more historic perspective of what it means to be human; and […] inclines towards an understanding of grace as reified and tenable in a way that fails to attend to the full depths of human sin” (p. 296). The irony for Nimmo is that these are precisely the sorts of concerns that Webster himself registered at an earlier stage of his career, but in respect of which his anxieties appear to have abated over time. These are central theological issues, and it is likely that the debates they inspire will continue to be a focus of Webster studies in the future.

It is to the future, then, that the Companion points us. How will study of John Webster’s theology develop, and what will be the potential fruits of such study? As Vanhoozer quips in his Foreword, “[t]his handbook, published so soon after [Webster’s] passing, is probably as close as Protestants come to canonization” (p. xiii)! There is a half-truth here. It is only five years since Webster’s death, and one senses that most secondary reflection on his legacy continues to be written in almost hushed tones by those who knew him personally. There is nothing wrong with that: Webster was a theological luminary and those who enjoyed his light are right to reflect well on a superlative teacher, mentor, and friend. But a future generation of Webster readers and students, perhaps one step removed from the man himself, may feel freer to interact with Webster’s theology from a more critical perspective, while still cultivating the humility and teachableness to learn from Webster’s example.

John Webster is perhaps not as well-known as he might have been. This may be a consequence of his personal humility (a feature of his character remarked upon by several contributors). But it is incumbent on students of theology to make Webster’s acquaintance, not least because of his widening influence through his many former students around the world. This Companion would be a great place to begin, in order to “situate” Webster and begin to interact with his theology. In addition, reading John Webster opens up a promising way to learn from and engage with the broader tradition of western, Reformed, evangelical theology. (Webster himself expressed his intention to write “evangelical” theology, and he is often known as an evangelical theologian. But as he pointed out in the proposal for his Systematic Theology, Webster intended “the German sense of evangelisch rather than the more restricted North American sense of a particular blend of modern Protestant developments” [p. 300].)  Finally, reading John Webster is a bracing experience because of his principal subject matter: the eternal and replete Triune God who, of his overflowing love, creates, restores, and perfects creatures for everlasting fellowship with himself.