John Meade currently serves as Associate Professor of Old Testament at Phoenix Seminary in Phoenix, AZ. He is also Co-Director of the Text and Canon Institute at the same institution. Moreover, he is a contributor to the Evangelical Textual Criticism blog and the Hexapla Institute. John Meade is a graduate of The Southern Baptist Theological Seminary, where he obtained a Ph.D. in OT, under Peter Gentry.

The book under review is the fruit of Meade’s dissertation. Meade has established a critical edition of the fragmentary evidence extant for chapters 22 through 42 of the Hexapla of Job. In other words, Meade provides a curated collection of all the readings of Origen’s Hexapla as it pertains to the book of Job. This task has led Meade to examine manuscript evidence from Greek, Syriac, Latin, and Armenian sources. As such, this work gives an updated presentation of hexaplaric readings, improving on the work done by its predecessors.

The book is divided into three main chapters. Chapter 1 (pp. 1- 26) does an overview of the textual sources examined.  In this part, Meade discusses textual witnesses, how they are grouped and related, previous textual editions, evidence from catena manuscripts, and closes with a section dedicated to illustrating how the hexaplaric material is discussed.

Chapter 2 (pp. 27-400) is where Meade presents the best possible hexaplaric readings of Job chs. 22 to 42. Meade utilizes a textual apparatus format. For each lemma in view, then, a series of witnesses for or against the lemma is presented. This format or layout is similar to that of BHS or the Göttingen LXX—the witnesses are listed below the main lemma under consideration. However, unlike these two critical editions, the lemma is not part of a continuous flow of text. It stands alone, occasionally with more text in parentheses to provide context. Another feature of this apparatus format is that Meade provides the Hebrew text following the MT tradition and the Old Greek text of the Göttingen edition of Job. At other times, where appropriate Meade presents the text of Theodotion (the asterisked text), instead of the Old Greek text.

The last chapter (pp. 401-442) presents all the readings regarded as dubious. These are fragments whose “relationship to the Hexapla” needs further clarification (401). Meade lists them not only for the sake of comprehensiveness but also “that they might become the object of future study” (401).

In order to properly assess the significance of this work, we must keep in mind that it is meant to be and function as a textual apparatus. This fact will affect our reading strategies and will help the reader understand its relevance. It is a reference work first and foremost. Furthermore, Meade has done the hard part of defining the textual relations among the hundreds of MSS containing hexaplaric readings for the book of Job. This work in turn will aid future scholars who might find themselves dealing with textual issues both in Hebrew and in Greek.

Even though the value of the book resides primarily in advancing the study of the history of transmission of Job, there is another aspect of the book which deserves our commendation, and that is its sound methodology. First, not only did Meade have to compile all the manuscript sources available for the Hexapla, he also had to sort through previous scholarship, rectify outdated notions on the relationships among the MSS, and organize it all in a coherent whole. This endeavor can prove to be a dizzying task. As a result, no further work on the history of transmission of Job should be conducted without first consulting Meade’s contribution.

Second, the sound methodology displayed in Meade’s work is insightful and of great didactic value. For example, Meade shows us how to properly lay out textual witnesses­—in this instance the order of the factors does change the product. The Hebrew MT and Old Greek come first, followed by the Greek hexaplaric variant in question and then the various Greek witnesses. Lastly, we encounter the Latin, Syriac and Armenian witnesses. This order is not haphazard but rather reflects the importance and relationship of each primary source text. Meade, however, goes a step further and discusses the many different issues that arise from variant to variant. Let us keep in mind that we are not dealing with textual criticism of the Hebrew Bible or the Old Greek, but rather the Hexapla which adds multiple layers of complexity.

In conclusion, as much as one ought to keep abreast of the current developments in textual criticism theory, this discipline is learned primarily through practice. Though Meade limits the scope of his work to hexaplaric readings in Job, the principles gleaned in this book can be broadly applied to MT and LXX textual criticism. Therefore, any professor who attempts to instruct his or her students in the art of textual criticism would do well to use Meade’s work as a showcase of best practices to follow. 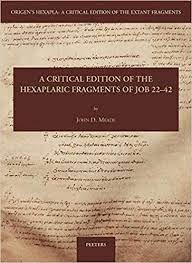