Pettegree, Andrew. Brand Luther: How an Unheralded Monk Turned His Small Town into a Center of Publishing, Made Himself the Most Famous Man in Europe—and Started the Protestant Reformation. New York, NY: Penguin Random House, 2016, pp. 400, $18, paperback. 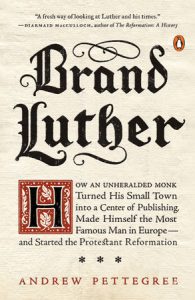 Andrew Pettegree is Professor of Modern History at the University of St. Andrews and Founder of the university’s esteemed Reformation Studies Institute. His recent monograph, Brand Luther: How an Unheralded Monk Turned His Small Town into a Center of Publishing, Made Himself the Most Famous Man in Europe—and Started the Protestant Reformation, was warmly welcomed by Reformation scholars and, given its release by a popular rather than academic press, interested lay people across the world in anticipation of the Reformation’s 500th anniversary.

As its long subtitle suggests, this book tells two complementary stories—Luther’s personal journey and Wittenberg’s journey from relative insignificance to international fame in only a few short decades. These two stories are woven together by the printing press. According to Pettegree, without Luther’s pen Wittenberg would have continued to exist in obscurity during the sixteenth century. Yet without Wittenberg’s assets, Luther’s voice would have been lost in the academic debates of his time.  Pettegree examines how a localized theological spat became a public event by focusing on Luther’s talents as a vernacular writer. To that end, Pettegree analyzes the economic and theological factors which drove the Luther phenomenon. These strong forces resulted in a nation-wide Lutheran movement, an instant boost to the local urban economy, and a refined printing industry over a few short decades.

Chapters 5 and 6 show how at the core of this success story lies the quality of the new product – Luther’s theology published for the laity in the German vernacular and decorated with signature, appropriate artwork created by local artist Lucas Cranach. Pettegree reiterates that the product’s content was as important as its packaging. Luther’s theology was worthy of beautiful woodcutting techniques; together, they comprised “Brand Luther,” an unmistakable image that generated great interest and profit. This is not to say that the Reformation was simply an economic success story of bestselling books with eye-catching covers. Rather, the sales reflected laity’s desire for fresh theology and practice, in which they could directly participate, based on the universality of the priesthood.

Chapter 7 shows how Luther was always mindful of the cost of production and the final price of his books. His pamphlets were published in a convenient, pocket-sized format, which was easy to produce and cheap to sell. Luther was also sensible about the cost of larger works, such as the vernacular Bible. For instance, when translating the Old Testament into vernacular German, Luther decided to publish it in three chunks, so that his audience could afford to purchase it progressively over a longer period of time. The final product took much longer than intended—twelve years—but in the end the delay proved to be very profitable to the printing industry. Pettegree avers that the translation of the Bible was at the heart of the Wittenberg Reformation, not only for economic purposes, but mostly for theological purposes and for the gospel to be read and preached in German.

Luther acquired a new audience outside the Latin-based academy, as he translated serious theology into a most elegant German, his popularity helping him withstand Catholic counter-attacks. Moreover, Cranach understood the power of Luther’s own name, which, over time, emerged from cluttered title pages and received its own center line. It is important to note that until the sixteenth century, original authorship was disregarded, because printers focused upon reproducing classic texts such as writings by Seneca or Aristotle. With the rise of the Reformation, Luther’s identity became a selling point in itself, and thus his name became one of the most powerful logos of the movement.

Pettegree spends much deserved time on Cranach’s artistry. The packaging of Luther’s product was an important aspect of promotion, for it visually communicated the content and the author of the published works. Drawing upon his knowledge of art history, Pettegree draws our attention to the stylistic conventions Cranach worked with to promote Luther’s books. For instance, popular paintings of the era were often done in landscape format but books, by default, were in portrait format. In addition, the standard illustration for a title page left a large, empty block in the center for the title, author, and city of publishing. This formatting created obvious obstacles for sixteenth-century artists, yet Cranach rose to the challenge and created a distinctive look for “Brand Luther,” one that was bold, clear, and widely recognizable.

As Pettegree shows, it is notable that the majority of Wittenberg’s publishing houses came to support the evangelical cause after 1517, given that their previous client was the pope. Indulgences, in fact, had been a lucrative product, given their convenient one-sided, single-sheet format. At first, Luther’s attack on indulgences threatened the printing industry but, shortly afterwards, the printers realized Brand Luther’s potential. For instance, the printing of the 95 theses into the vernacular had carried them outside academia into German public life. This disputation called for many responses for and against the Lutheran movement, and so the printers remained in business. Thus, theology became a public matter. Through his writings, Luther called the German people to realize their role as a “priesthood” by engaging with deep theological issues, and the people responded in large numbers. According to Pettegree, these sales testified to the Reformation’s success in Wittenberg. The people’s own interest in theology, the increase in demand for Luther works, and his own survival against the Catholic threat all contributed to the long term success of Brand Luther.

By employing an economic-theological framework, Pettegree successfully shows how both Luther and Wittenberg rose from their obscure beginnings to international fame. This book is an excellent example of giving new life to the old narrative of the Reformation as an economic phenomenon. One topic perhaps deserving more analysis is Luther’s contribution to musical print culture. Pettegree touches on this subject briefly in his last chapter, yet there could be more attention to Luther’s emphasis on music education and the success of his hymnals as powerful elements in the success of the Reformation. Regardless, Pettegree’s monograph should prove to be one of the more memorable entries in the spate of scholarship commemorating the Reformation quincentenary. His language is very accessible, and he interacts with secondary literature only in his endnotes, thus making for a very smooth, informative, and enjoyable narrative. The same way Luther’s message stirred the hearts of laymen and scholars across the German lands, so will Pettegree’s monograph stir a renewed love for the Reformation story in the hearts of all his readers. 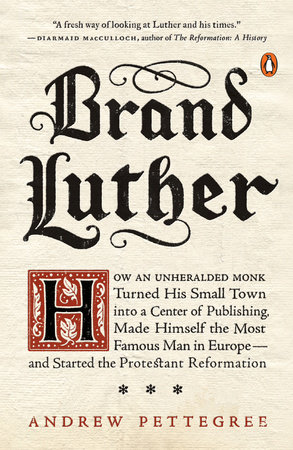