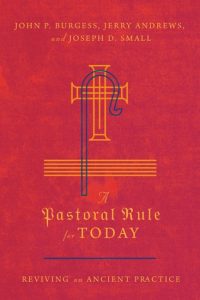 John P. Burgess is Professor of Systematic Theology at Pittsburgh Theological Seminary and author of Holy Rus’: The Rebirth of Orthodoxy in the New Russia (2017), and Encounters with Orthodoxy: How Protestant Churches Can Reform Themselves Again (2013). Jerry Andrews is pastor of First Presbyterian Church in San Diego California. Joseph D. Small is retired director of the Presbyterian Church (USA) Office of Theology and Worship, and author of To Be Reformed: Living the Tradition (2010), and Proclaiming the Great Ends of the Church (2010).

A Pastoral Rule for Today “emerged out of an initiative of the Office of Theology and Worship of the Presbyterian Church (USA) called Re-Forming Ministry” (p. ix). The book is the culmination of denominational dissatisfaction with the current state of pastoral ministry and a successful attempt by three significant figures to “analyze the current situation of the church and to propose ways to strengthen the theological foundations of pastoral ministry” (p. ix). “While other members of the initiative pursued different areas of concern,” Burgess, Andrews, and Small committed themselves to “formulating a contemporary pastoral rule that could guide and sustain the ministers of their denomination” (p. 163). The authors express concern with the state of pastoral ministry today and upsetting trends like the “deep declines in membership and significance” (p. 3) within mainline Protestant denominations, as well as the rise of technology and the time constraints placed upon pastors. By establishing a pastoral rule for today of healthy patterns and practices, pastors can stop suffering from “constant distraction, interruption, and fragmentation” (p. 4). By looking into the pastoral rules of the great saints of history, the authors seek to “stimulate creative thinking and spiritual discipline among our pastors and churches” (p. 163). “This book,” they claim, “is not an exercise in history for history’s sake but rather a grateful acknowledgment of how Christ binds us together with the saints and wise elders of every time and place” (p. 2).

The rule consists of three components which they argue have been practiced regularly by the great Christian theologians and pastors of history: “personal discipline, conduct in ministry, and structures of mutual accountability” (p. 165). Though their aim is practical, their method is historical-theological. Andrews writes chapters on Augustine and Gregory the Great, while Small contributes entries on Benedict and Calvin. John Burgess writes three chapters covering the “rules” of Wesley, Newman, and Bonhoeffer. One significant strength of their method is that it clothes each historical chapter with practical ecclesiastical application and spiritual earnestness. One would expect the practical aims of their work to influence the content in negative ways, thus failing to plumb the theological depths of each figure and time period. Conversely, others may expect the theological depth of each chapter to deter contemporary readers. However, the authors have crafted a book that suffers not from these challenges. Their argument for establishing a pastoral rule for today is confidently interwoven into each historical sketch because of their belief that “the Christian past does not constrain our imagination but rather opens it into insights and possibilities for ministry” (pg. 1).

The authors admit that their list of historical figures “is in no way exhaustive, but it does represent a wide swath of the Christian faith: Catholic, Protestant (Reformed, Methodist, and Lutheran), ancient and modern, monastic and lay” (p. 9). “Each figure played a key role in inspiring and organizing communal life in his time” (p.9). Community life for Augustine was marked by theological friendship, while Benedict stressed obedience: a concept “not valued by contemporary pastors” (p. 48). Gregory the Great argued that “pastors, like monks, need a life of disciplined prayer,” (p. 10) and a constant daily movement from the “vertical to the horizontal; God and neighbor” (p. 72). Mutual supervision and corporate accountability were hallmarks of Calvin’s Genevan school. Wesley’s rule, however, was not established by Wesley himself but only regarded as a rule by the authors. This makes the chapter on Wesley rather weak. Wesley simply urged that graciousness be on the lips of those speaking “in conference” (p. 117). The Wesley chapter should either not be included in the book or moved to the place of an appendix. The Newman chapter, written by Burgess, examines the discipline of reading and study for the purpose of spiritual growth and discipleship. However, Burgess places too much emphasis on the need for pastors to have an “attachment to a place” (p. 141). While having such a place is no doubt helpful to pastors, some pastors who do not have the luxury of a permanent study room, must learn the art of being nimble. Such a requirement by Burgess lies outside of a biblical and historical rule, and fails to meet the criteria of the rules established in other chapters. The simplicity of Bonhoeffer’s rule of life in the Finkenwalde community is refreshing. The discussion questions following the Bonhoeffer chapter are practical for using in a small group. The last chapter of the book gives a helpful plan for establishing one’s own rule. The authors encourage the establishment of a written rule within a community of other pastors/elders/leaders.

In conclusion, the authors successfully convince the reader that a pastoral rule is needed for today. They unearth the lost arts which many early theologians and pastors practiced throughout history. They present a convincing case for recovering and reestablishing a more robust sense of community through discipline in the church. Readers must decide if establishing a rule in their community is worth the costs. Because the book is written from a particular denominational perspective, it lacks certain qualities that could be more winsome to independent autonomous churches and leaders. Pastors who serve singularly in independent autonomous churches will find the book to be admirable and valuable, but they will struggle to make it apply to their own situation. The rule may simply become a type of personal growth plan with no corporate accountability. However, the book could also serve to stir such pastors to becoming more accountable to others instead of “free agents” (p. 92) who struggle to be disciplined. 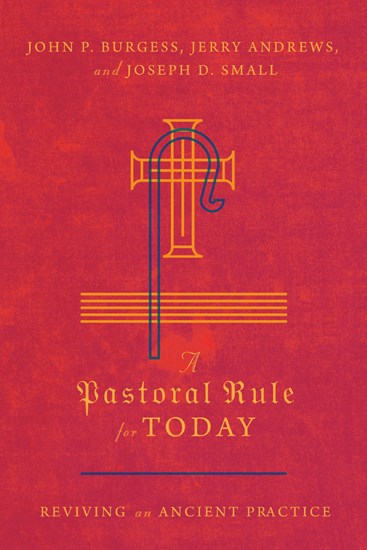