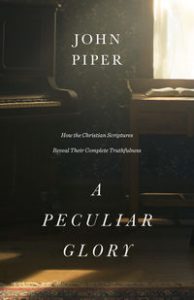 John Piper (DTheol, University of Munich) served for 33 years as pastor of Bethlehem Baptist Church in Minneapolis, MN. He is the founder of desiringGod.org and chancellor of Bethlehem College & Seminary. Over the years, Piper has written over 50 books, each dedicated to connecting man’s joy and satisfaction with the glory of God. A Peculiar Glory is no exception. In this most recent book, Piper connects certainty of mind in the truthfulness of the word of God with the direct revelation of God’s glory through the Christian scriptures. His argument is that the truthfulness of the Word of God is self-attesting as God’s glory shines through with a peculiar light, enlightening the mind and satisfying the soul.

In summary, Piper’s argument is a defense of verbal-plenary inerrancy. He argues for the complete truthfulness of the Old and New Testaments in all they claim. However, the distinctiveness of Piper’s project is to provide a warrant for the believer’s certainty and trust in this claim. How can one come to know (with certainty) the truthfulness of the Word of God? The warrant he offers is that “In and through the Scriptures, we see the glory of God” (p. 13). As the apostles saw God’s glory in Christ face-to-face (cf. 1 John 1:3), so “we can see through their words” (p. 13). Faith is not a leap in the dark but an act of warranted trust grounded in our having seen directly the glory of God revealed through the word of God illuminated by the Holy Spirit. This glory is an objective and self-attesting reality. As he argues in the final part of this book, this glory is of a peculiar nature. The warrant of well-grounded faith is in the “utterly unique glory of Jesus Christ” (p. 17). This glory is the paradox of transcendence and meekness found in Christ, which matches the template of humankind’s innate knowledge of God (c.f. Romans 1:19-21). When the Holy Spirit enlightens our eyes to this glory through the Word of God, we can have certainty in the knowledge of God.

The book breaks down into five parts. Part I begins with Piper’s personal story. Beginning with the premise that “everyone is standing somewhere” theologically. That is, everyone stands in relationship to God and the Scriptures whether in ignorance, skepticism, doubt, or belief. Piper clarifies the “somewhere” from which he writes this book by relaying the story of his life raised in a Bible-believing home up through to his formal education and graduate work in Germany. Along the way, he experienced objections to his view of the Scriptures. He describes an experience, not of holding onto his view of the Bible, but of his view of the Bible holding onto him (p. 25). This is where he defines his view. The place where he stands and the starting point for the argument of his book is a solidly conservative belief in the inerrancy of Scriptures and their “final authority in testing all claims about what is true and what is right” (p. 35).

Parts II (Chs 2-4) and III (Chs 5-7) offer a somewhat typically evangelical defense of canon of the Old and New Testaments. In Part II, he defines the canon as the Old and New Testaments as well as providing a textual critical case that the OT and NT are the words of the biblical authors. Part III (Chs 5-7) treats the internal claims of the Scriptures for the Scriptures. This argument begins with the OT authors as “actors on the stage of the Old Testament” (p. 90). That is, they are conscious that God is speaking to them and through them, but are not consciously commenting on Scripture as such. Rather, God was speaking to people through people using human language. Building on the examples of Moses and the Prophets, Piper then argues that God “intends for there to be a written form of this divine revelation” (pp. 94-96), and as the Hebrew Canon is the collection of such writings, it comes with the implicit claim of complete truthfulness. The remainder of his argument for the New Testament is Christocentric as Jesus is “the Old Testament-fulfilling, divinely sent Messiah” (p. 124) and who confers his authority upon his apostles and anoints them with his Spirit.

Parts IV (Chs 8-11) and V (Chs 12-17) constitute the heart and distinctiveness of this book. Having defended the claim that the Old and New Testaments are the authoritative and true word of God, Piper turns to build his case for well-grounded certainty in their truthfulness. His concern is to liberate them from the burden of historical reasoning. That is, he sees modern historical scholarship as insufficient for establishing the truthfulness of the Scriptures. He is at pains to clarify that this is not because there are no good historical reasons to believe in the scriptural claims, or that there is no value or benefit in historical scholarship, but that most people in the world do not possess the training, resources, or time to ground their faith in such arguments. “And yet,” he says, “the Bible assumes that those who hear the gospel may know the truth of it and may stake their lives on it” (p. 130). Moreover, historical arguments only “produce probable results…but faith needs certainty” (p. 131).

The final part (V) concludes by describing the peculiar glory of God revealed in the Scriptures. Here Piper focuses on the distinctive character revealed in Christ. The certainty of mind comes because the distinctive character of this revelation matches or rings true with the innate and intuitive knowledge of God every human possesses (Romans 1:19-21).

There are many strengths to this book overall. First, Piper wrestles with an important question trying to ground a certainty of belief for those whom the fruits of historical research are not available. Moreover, he wrestles with problem of submitting the Scriptures to the validation of historical criticism, which is a burden of verbal-plenary inerrancy. Here Piper attempts to ground the truthfulness of the Scriptures in an encounter with the glory of God. The Scriptures are a place of encounter. They are the place where we meet God. This emphasis does help to explain how the Scriptures can be accessible for the average person and not only the historian. It helps to correct the modern tendency to dissect the Bible as a book of history to handle with the tools of modern science and historiography. Rather, they are the place to grow in the knowledge of God with all its resulting faith and joy.

There are at least three critiques to offer. First, there are few footnotes in this book later than the 1990’s. In cases where contemporary scholars are cited, they are mostly as a kind of “if you’re interested in this question, see these other books” manner. By cutting himself off from contemporary scholarship and refusing to engage any of the contemporary debates, the book is limited in its helpfulness for the contemporary Christian wrestling with contemporary linguistics, theories of truth, trajectory hermeneutics, or concepts like incarnational views of the Scripture. The argument for verbal plenary inerrancy is really a restatement of Evangelical arguments from the 20th Century.

Second, the theses from Parts IV and V may not adequately provide ground for the claims in the first three. That is, his argument that the truthfulness of the Bible is self-attesting as one encounters the peculiar Glory of God, seems to be quite at home with non-inerrantist views of Scripture. By using experiential and consequentialist language to describe the certainty of trust in the Bible, it would seem infallible, incarnational, neo-orthodox, or reader-response views of the Bible may fit quite comfortably, leaving an argument for inerrancy weakened or unnecessary.

Finally, one remains without resource when it comes to counter claims about the nature of Scripture. For example, if the Christian grounds the truthfulness and authority of Scripture in their personal sight or vision of the glory of God, what do they do when they encounter the Mormon’s claim to have encountered God in their expanded canon? How does one counter the atheist’s experience reading the Scriptures when they see in their pages a capricious God who appears to be acting like other tribal deities? Can we say the Scriptures are self-attesting in this way, or must we engage other paths to certainty?

This book is pastoral in nature. It will serve the Church as so many books of its purpose have done in the past. It improves upon them as an encouragement to pursue the knowledge and the glory of God through the Scriptures actively and with faithfulness. It is a word of caution against a relationally detached reading of Scripture, and is an exhortation to know and delight in the glory of God through it. However, it suffers in its failure to engage with many of the contemporary questions faced by a generation that has tended to move beyond the inerrancy debate. 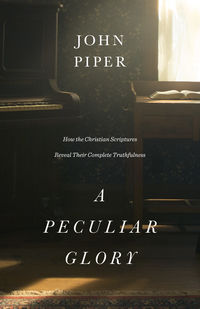