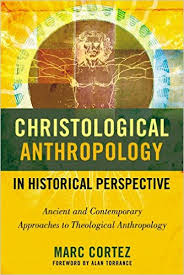 What makes us human? This is a question upon which much ink has been spilled. Most studies attempting to answer this question have tended focus on one of several topics: 1) human origins, 2) ethics, and 3) the imago dei. What Cortez brings to this already oversaturated field is a rethinking of the methodology upon which so many of these studies are founded. Cortez’s approach to theological anthropology is strictly Christological. Although this book is not primarily a constructive proposal but a study of historical Christological anthropologies, Cortez reveals his constructive method which will be taken up in a future study.

Cortez begins by defining Christological anthropology. He defines this approach as “one in which (1) Christology warrants important claims about what it means to be human and the scope of those claims goes beyond issues like the image of God and ethics” (p. 22). In order to make a case for what this approach looks like, he devotes seven of the eight chapters to exploring the Christological anthropology of five historic authors and two contemporary authors. Cortez begins by showing how Gregory of Nyssa’s Christological anthropology “requires that we bracket out biological sexuality as a nonessential feature of historical humanity” (p. 55). He then turns his attention to Julian of Norwich’s cruciform anthropology in which the cross reveals that to be human is to be a creature united to Christ and sheltered in God’s love. The chapter on Julian is followed by a chapter on Martin Luther’s understanding of how justification informs what it means to be human. Here Cortez argues that Luther’s theology of justification reveals not only the current fallenness of humanity but the eschatological telos of humanity in which God intends to bring about true humanity by redeeming it rather than replacing it (p. 95). The chapter on Luther is followed by a chapter on the reformed theologian, Schleiermacher, who in general is not well received by many conservative Christians. Cortez recognizes that including a chapter on Schleiermacher might seem unusual to some, and he attempts to defend his decision to devote a chapter to him. He argues that Schleiermacher’s anthropology is truly Christological. The subsequent chapter treats the theological anthropology of Karl Barth (a subject about which Cortez has previously written a full-length monograph). This chapter primarily focuses on Barth’s method and the difference it makes for the mind/body debate. The final two chapters address the work of two contemporary theologians: John Zizioulas and James Cone. Both chapters emphasize the communal nature of human beings. Zizioulas’s theology emphasizes the communal nature through his Trinitarian definition of personhood, and Cone emphasizes this by understanding humanity in light of liberation of the oppressed. All in all, these chapters serve as fitting introductions to the theological anthropology of the chosen figures. The chapters are concise and charitable, and the theological novice will quickly learn the prominent themes in the works of these theologians.

Though this reader has found much to appreciate in Cortez’s volume, this does not mean it is without shortcomings. First, it should be noted that Cortez does not critically engage with the theologians in his case studies. These case studies are primarily summaries of a given theologian’s anthropology. Readers would have benefited if Cortez had given at least a few reasons for not accepting a given theologian’s claims. Second, Cortez fails to address, in any substantive way, potential critiques of Christological anthropology. As someone who finds affinity with Cortez’s methodology, I would have liked to see Cortez respond to some objections to this method. Given the lack of engagement with possible objections, one gets the impression that his method is simply the best way to do theological anthropology, but Cortez does not do enough to motivate this conclusion.

Despite these flaws, Cortez has provided his readers with an excellent introduction to the topic along with some interesting and varied case studies. This book will be valuable to upper division undergraduate and seminary students who are wrestling with various methodological approaches to anthropology. It will also serve those who are interested in anthropological issues beyond human origins and the imago dei. Perhaps some of those students will continue to build upon the solid foundation that Cortez has laid in this book.