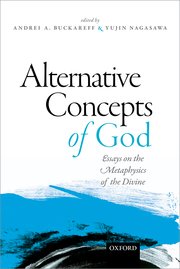 The renaissance of philosophy of religion in the 20th Century brought with it an in-depth exploration of the metaphysics of theism. Other alternatives to theism have been explored such as pantheism and panentheism. Yet, these alternative models of God have not been given the same level of attention as theism in contemporary philosophy of religion. The collection of essays in Alternative Concepts of God seeks to provide readers with non-theistic explorations of the metaphysics of God. Each essay is well written, and the scholarship is fairly solid. However, most of the essays do not offer alternative conceptions to a theistic understanding of God in any significant depth.

For example, Karl Pfeifer’s paper, “Pantheism as Panpsychism,” spends more time developing panpsychism than it does articulating pantheism. The connection to pantheism is not altogether clear as it seems that a theist could easily adopt panpsychism without endorsing pantheism. Andrei A. Buckareff develops a powerful argument for thinking that God must have spatial location; however, he does not develop this model of God in any depth. He spends the majority of the essay arguing for the conclusion, and no time articulating what that conclusion looks like. The only indication of what this alternative model of God might look like comes in a footnote where Buckareff says that a spatial God could fit either pantheism or panentheism (p. 214). It is not clear to me why a theist cannot say that God is spatially located. In fact, scholars like Robert Pasnau, Ross Inman, and others have argued that no classical theist wished to deny spatiality of God until after the scholastic era. So it is not altogether clear that Buckareff’s spatial God is an alternative to theism.

Another set of examples come from Willem B. Drees and Eric Steinhart’s contributions to Alternative Concepts of God. In Drees’ paper, he never fully develops an alternative to theism. In his paper he discusses several issues in science, then gestures towards the view that maybe we do not need a personal God. Instead, Drees thinks we should say that the divine is the ground of existence (pp. 208-210). Drees does not even hint at what this could possibly mean. Theists often say that the personal God is the ground of existence, so the reader is left wondering what alternative concept of God Drees has given us. In Steinhart’s paper, he offers an account of religious naturalism. Naturalism is typically taken to be a rival to theism in contemporary philosophical literature. However, Steinhart does not offer definitions of his terms, this includes a definition of “naturalism.” So it was not obvious to me how this is an alternative to the concept of God that we find in theism.

To be clear, I am not saying that these are bad essays. I am simply pointing out that they do not give the reader a clear, developed, alternative conception of God to the well-developed versions of theism on offer elsewhere. In fact, in several cases, the essays offer alternatives to the concept of God. For instance, J. L. Schellenberg develops an interesting proposal for thinking about the ultimate nature of reality that does not automatically lead to any personal God at all (p. 166). I must emphasize the “automatically” because nothing in Schellenberg’s proposal leads us away from the personal God of theism either.

In several of the essays, I struggled to understand the desirability of the alternative conceptions that were proposed. Emily Thomas’ essay articulates Samuel Alexander’s space-time God. On this proposal, God will eventually emerge from the universe. However, God does not yet exist. God has not yet emerged from the universe (pp. 256-264). Thomas attempts to argue that this conception of God is better than other versions of panentheism on offer by theologians like Philip Clayton (pp. 264-271). Yet, I failed to see how this was the case. This emergent account of God cannot explain the existence of the universe, nor why we should think that the universe will give rise to a God. On current scientific projections, the universe is headed towards heat death, which makes life in the universe impossible. The needed level of complexity for a God to emerge from the universe will not last for long, assuming the universe ever reaches that level of complexity before heat death obtains. It is not clear to me why this is more desirable than Clayton’s personal panentheistic God.

For as critical as I am being, I should point out that several essays are worthy of note. Brian Leftow offers an interesting critique of naturalistic versions of pantheism. In one of the arguments he develops he argues that we tend to think that any being that befits the title ‘God’ is worthy of worship. Part of being worthy of worship is being the kind of object that can be aware of worship directed towards it. Yet, it seems like there is no way that a naturalistic universe could be an object of worship because it lacks awareness of anything (pp. 71-73). Yujin Nagasawa develops an account of panentheism modeled on David Lewis’ modal realism. After articulating and motivating the model of God, Nagasawa argues that this model of God makes the problem of evil intractable. Robin Le Poidevin’s essay on religious language offers an excellent critique of religious fictionalism arguing that one cannot coherently conceive of God as a fictional object.

To sum up, several of the essays in this volume are well written, and will be important for theologians and philosophers of religion to consider. Students who are thinking about pantheism will greatly benefit from Leftow’s essay. Students working on religious language will want to read Le Poidevin’s criticism of religious ficitionalism. However, if students are looking for well-developed alternatives to theism, they should look elsewhere.