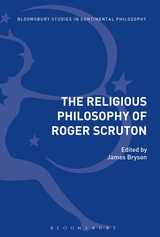 In 2016 Roger Scruton, eminent British philosopher and writer, was knighted by Queen Elizabeth on her birthday. Sir Roger, recognized for his accomplishments in philosophy, teaching, and public education, was at the apotheosis of career spanning decades where he wrote and lectured on topics ranging from aesthetics, art, politics, and natural conservation. Surprisingly, there has been very little academic literature about Sir Roger’s writings, even less about his religious views. Given that he has written works on both religion and church life, this absence is glaring. It was to a great surprise that I noticed The Religious Philosophy of Roger Scruton. Originally conceived as a conference on Scruton’s writings, the work is a collection of papers presented on Sir Roger’s religious philosophy. The collection is well-thought out and organized clearly.

The book itself is divided into four parts, each with essays devoting their time to exploring various areas of Scruton’s work. Part I is an exploration of Scruton’s writing on religion, Part II attempts to dive into the influences that shaped Scruton and his writing. Part III explores Scruton’s defense of art, beauty, and aesthetic endeavors. Finally, Part IV is a collection of essays analyzing Scruton’s conservatism. The work concludes with a final essay from Scruton, responding to several essays from the work.

Each essay analyzes, in varying degree, a key aspect of Scruton’s work. One idea that gets a lot of attention in this work is Scruton’s concept of the sacred. An admittedly vague concept, various authors attempt to demonstrate that this concept is the interpretive center of Scruton’s work on religion, aesthetics, and political philosophy. John Cottingham, for example, shows that Scruton wants this concept to have a metaphysical foundation. But, he says, Scruton does not go far enough (41). While it’s clear that Scruton has a Judeo-Christian orientation, he will often elide the ethical demands of this framework in favor of an “over-aestheticized, or perhaps over-romanticized analogue for religious awe” (42).

This criticism becomes a key theme throughout the essays contained in this excellent work. The impression left after finishing the work is that many of the scholars are in agreement with the path that Scruton is blazing; they only wished he was clearer about the directions. That is, they wanted more. For some, a warmed-over Anglican Protestantism that serves as mere housing of the best of English religion and culture is not enough. As Brian Hebblethwaite comments in his essay, “Metaphysical and Doctrinal Implications,” that while Scruton clearly understands the power of Christianity’s ideas, his “reluctance to pursue the path of metaphysics makes me wonder how far his commitment to the truth of Christianity goes” (71).

The location of this skepticism is undoubtedly Scruton’s clear affinity for Kantian metaphysics. This shows itself throughout his various works. In Beauty, for example, Scruton lands in Kantian disinterestedness as an essential feature of the apprehension of beauty. This avenue is the way in which we can experience the transcendental (or sacred) without knowing where it comes from. It is beyond the rational experience, but it comes to us in our aesthetic experience. Aesthetics is the pathway toward the transcendent, and in this he follows the post-Kantian idealists.

Readers of this work will find it to be challenging but rewarding. It is unique in the field as it is—at least in the reviewer’s awareness—the first sustained academic exploration of Roger Scruton’s thoughts on religion. The book itself does not have to be taken in chronologically. Rather, the four parts are nicely divided such that one can dive into the area they feel most comfortable or curious to explore. If you are looking for a place to begin with Roger Scruton, this work would likely not serve you well. Instead, Mark Dooley’s The Philosopher on Dover Beach can serve as an excellent appetizer to this work. Dooley presents Scruton’s overall project and ideas. If you are looking to start with Scruton on religion, the reviewer suggests The Face of God or The Soul of the World. Regardless, gathering a sense of what Scruton means by the sacred will be an essential hermeneutical key to unlock the riches the British philosopher has to offer.

In sum, this work is highly recommended for those students that may be interested in Roger Scruton, an example of what it may look like to ride the fence of the proverbial “analytic” and “continental” divide, or for purveyors of philosophy of religion. Further, it would serve evangelical Christians in academics to read this work. A weakness of the work is that it did not advance conversations theologically. Perhaps this is a misplaced grievance. If so, then it presents an opportunity for evangelicals to engage with Scruton’s work in order to see what we may learn from him. While, as a friend once said, Scruton is not regarded among evangelicals as a “brother”, he is a fellow-traveler. A cobelligerence between evangelicals and Scruton could prove a boon to the former. We have common enemies, and he can provide helpful ammunition.