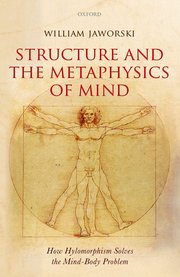 William Jaworski advances a unique take on an ancient metaphysical notion to solve the most confounding problems in the Philosophy of Mind. In Structure and the Metaphysics of Mind: How Hylomorphism Solves the Mind-Body Problem, Jaworski’s modest aim is to “…show that hylomorphism deserves a place at the table alongside more familiar theories such as nonreductive physicalism, emergentism, and Russellian monism” (p. 314). This goal is achieved.

The first five chapters of the text may be taxing for the beginner scholar, as they focus on metaphysically abstract questions like the problem of universals, the nature of structure, powers, and puzzling questions in mereology. Nonetheless, the payoff in the subsequent chapters is a lucid and original hylomorphic theory of mind which can provide compelling responses to a wide variety of problems physicalist theories of mind face.

Hylomorphism, for the uninitiated, is the position that among the basic constituents of reality are matter (ὕλη) and form (μορφή), or as Jaworski prefers, structure. Jaworski argues that, “A worldview that rejects hylomorphic structure… is a worldview that lacks a basic principle which distinguishes the parts of the physical universe that can think, feel, and perceive from those that can’t…” (p. 2). His mantra throughout the book is that structure matters, i.e. it is an irreducible ontological principle that, at least in part, accounts for what things essentially are; structure makes a difference, i.e. it operates as an explanatory principle that accounts, at least in part, for the powers things have; and structure counts, i.e. it explains the unity and persistence of composite individuals in a dynamic world (p. 3).

Among the important feature of Jaworski’s metaphysical framework for his hylomorphism is a substance-attribute ontology combined with a view of properties as sparse, rather than abundant, where properties would be co-extensive with predicate or class terms. That is, substances and the properties they have are individual and properties are “…what explain the objective similarities and differences among individuals and the causal powers they have” (p. 30). He affirms the “Eleatic Principle”, in which one is only ontologically committed to that which plays a causal role (p. 30). Jaworski defends properties as tropes, e.g. a shade of red in one apple may exactly resemble a shade of red in another apple, but there is not some universal property which is the same across these two different individual apples. Jaworski’s trope theory is pertinent to his brand of hylomorphism, e.g. his account of identity conditions for powers and activity-making structures utilizes the exact similarity among individuals (see p. 60 and p. 158). It is worth noting that while Jaworski rejects properties as universals, he says that his theory is compatible with those who accept universals, commending E. J. Lowe’s realism of universals as an example (p. 52).

Structure is what brings unity to parts and so is pertinent to the metaphysics of mereology. Jaworski utilizes Peter van Inwagen’s views on composition, in which there are only physically simple things and biological or living composites, as a foil to compare and contrast his hylomorphic views on mereology. Several well-known metaphysical problems in mereology, some of which arise for van Inwagen, are disarmed by Jaworski’s hylomorphism. Such problems include the body-minus problem, the problem of too many thinkers, the atomless gunk objection, and the supposed absurdity of van Inwagen’s denial of composite objects common to our experience, e.g. tables and mountains.

Part of Jaworski’s account includes activity making-structures, noting that the hylomorphist is not merely committed to there being individual-making structures but also those which matter, count, and make a difference. Activity-making structures are significant in understanding how hylomorphism applies to the philosophy of mind, as mental activities are paradigmatic examples, e.g. thinking, feeling, and perceiving. Notably, Jaworski argues in favor of an embodiment thesis, i.e. that “…all of the powers of structured individuals are essentially embodied…” (p. 162). To make his case, Jaworski notes that the burden is on his detractors to establish that there are any unembodied aspects to structured individuals. He considers some of Aristotle’s arguments for the immateriality of mind (νοῦς) found in De Anima 3.4, delving into an analysis of Aristotle’s analogy between perception and intellection. However, having embraced the embodiment thesis, Jaworski infers that the hylomorphist is committed to structo-physical necessitation and supervenience, which support the worry once raised by Bernard Williams that hylomorphism is just a polite form of physicalism.

To understand this worry, it is necessary to define “Physicalism”, but this is notoriously difficult. Jaworski cites Carl Hempel’s famous dilemma that if we are to define physicalism as the theory that everything can be exhaustively explained by physics, then either we are referring to contemporary physics, or some future ideal physics. If it is the former, physicalism is almost certainly false, since our current physics will undoubtedly be revised, and if it is the latter, than physicalism is contentless, as we don’t know what this ideal physics will be. Nonetheless, Jaworski opts for a definition in which physicalism is supposed to exhaustively describe and explain everything, “…by the most empirically adequate theories in current or future physics,” a definition that would include nonreductive physicalists who implicitly are committed to property dualism (p. 224). Interpreting Williams’ worry nine different ways, Jaworski carefully positions his brand of hylomorphism as a non-physicalist theory that takes structure as fundamental, and in so doing, he resists the notion that everything, and in particular mind, could be exhaustively explained by physics. While every argument cannot be rehashed in this review, a couple of critical comments are worth mentioning.

Jaworski raises the concern that hylomorphists believe thought, feeling, and perceptions, “…are composed of the structured manifestations of the powers of lower-level things, their powers and manifestations, are typically revealed through functional analysis” (p. 254). This suggests that the hylomorphist expects a material solution to what David Chalmers describes as the hard problem of consciousness. This worry hinges on the premise that reductive explanations imply that higher-level phenomena logically supervene on lower-level phenomena, and logical supervenience implies ‘materialism’, i.e. “physicalism”. Jaworski cites Chalmers’ definition of “materialism”, which Chalmers takes to be synonymous with “physicalism”; the notion that there is nothing over and above the physical, and that materialism means that all the positive facts about the world are globally logically supervenient on the physical facts” (pp. 255-6). Jaworski rejects the supervenience-based definition of physicalism as not capturing the core physical thesis that everything can be exhaustively explained via physics (see §11.5-11.6). Jaworski may be quibbling with Chalmers over how “physicalism” is to be defined. However, a deeper issue is whether a reductive explanation like a functional analysis can provide an exhaustive explanation. Chalmers thinks that reductive explanations should remove mystery, while Jaworski argues that the hylomorphist need not think that lower level mechanistic explanations remove all mystery, but need only answer how-questions. Moreover, the hylomorphist may escape the charge of physicalism in that she can accommodate causal-explanatory pluralism, in which some explanations are not reducible to the level of physics.  Still, citing what a hylomorphist can accommodate or her lack of commitments, seems, at best, to show that hylmorphism can be a form of non-physicalism, but may incidentally be a form of physicalsim, if it turns out that functional-analysis is mystery removing.  Jaworski points out that a hylomorphists will view a mechanistic explanation as “…postulat[ing] components that contribute teleologically to an activity as a whole”, which suggests a stronger stance on causal and explanatory pluralism (p. 256).  Still this point is a bit soft-pedaled. The hylomorphist must not merely accommodate explanations and causes that go beyond the “how-questions”, the hylomorphist must insist that such explanations or causes exist.

As thorough as the book is with respect to physicalism, little space is dedicated to responding to those who would reject the embodiment thesis.  While Aristotle’s arguments are addressed, his account of νοῦς is famously abstruse and his theory of perception is antiquated.  There are, however, contemporary hylomorphists who reject the embodiment thesis, e.g. James F. Ross and David Oderberg. I would have been interested to see how Jaworski would parry James F. Ross’ argument that determinate thought processes require an immaterial aspect to the mind (J. F. Ross. “Immaterial Aspects of Thought.” The Journal of Philosophy Vol. 89 No. 3 [1992]: pp. 136-155) or Oderberg’s argument from the problem of storing concepts (D. S. Oderberg. Real Essentialism. New York: Routledge, 2007, p. 252.).

One can only surmise how, given Jaworski’s metaphysics, he would respond to contemporary detractors of the embodiment thesis. Nonetheless, this does not diminish a successful undertaking. He dedicates his book proportionately to the trends one finds within contemporary philosophy of mind, a task that is necessary if he is to make the case that hylomorphism deserves a place at the table. Lastly, I should say the book is well-produced, lucid, organized with a clear structure, and free of typographical errors. Structure and the Metaphysics of Mind deserves a place on the desk of any philosopher of mind.