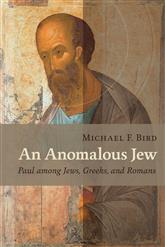 Contemporary Pauline studies generally heeds the adage that Paul was Jewish, although much argument remains about exactly what this statement means. Such declarations follow Paul himself, who identifies as an Israelite, a descendant of Abraham, and a Benjaminite (Rom 11:1). Michael Bird, Lecturer in Theology at Ridley College, attempts to specify some of the ways that Paul must be viewed within Judaism as well as how Paul became such a controversial figure within first-century Judaism.

The introduction maps how others have identified Paul’s relationship to Judaism around the coordinates of “former,” “transformed,” “faithful,” “radical,” and “anomalous” Jew. Bird sees the last qualifier as most apt but notes that much of what was unusual about Paul’s thought did not necessitate the particularly unaccommodating relationship between Paul and Jewish authorities. He understands Paul’s anomaly to be the revelation of Jesus Christ, “which discloses how faith in Christ without Torah was the instrument that brings Jews and Gentiles into reconciliation with God and into the renewal of all things” (p. 28). Other chapters test this hypothesis with regard to particular issues.

Chapter 1 summarizes perspectives regarding Paul’s view of Jewish soteriology and explores degrees of continuity between Paul’s soteriology and Second Temple Jewish texts. Bird views the chief difference in the two soteriological approaches as stemming from Paul’s emphasis on Christ’s revelation rather than Torah. Chapter 2 examines Paul’s mission to Jews in his Asian and Aegean travels and proposes that, although there may have been differences in how Paul related to his Jewish counterparts over time, Paul was an apostle to both Jews and Gentiles. Chapters 3 and 4 take up issues in Galatians. Chapter 3 defends elements of apocalyptic readings of Galatians but insists that Paul’s apocalyptic tendencies cannot be separated from salvation-history. Chapter 4 looks at the issue of table fellowship in Gal 2:11–14 where Bird sees a qualified Christ-Torah antithesis in Paul’s letter. Finally, chapter 5 studies Paul’s understanding of the Roman Empire with reference to the letter to Rome and finds challenges to Roman self-perceptions but neither unabating resistance nor passive quietism.

Bird’s writing is engaging, his positions represent genuine attempts to move scholarly dialogue forward, and his footnotes appropriately reflect the scholarship with which he interacts. By way of illustration, Bird takes up apocalyptic interpretations of Paul in chapter 3. His choice to read Galatians alongside apocalyptic interpreters is salient, since Galatians is the Pauline letter that is used most often for such a reading. Galatians contains several Second Temple apocalyptic motifs, but Bird also notes an underlying Barthian presence in apocalyptic studies of Paul for which Second Temple apocalyptic language can serve as a veil. Bird highlights Second Temple apocalyptic themes and finds that Paul’s apocalypticism is expressed most clearly in his interpretation of Jesus’s death and resurrection. Where some divorce Paul’s understanding of Jesus from Israel’s history, Bird rightly reads Galatians as a fresh configuration of scriptural themes and stories in light of Jesus. Apocalypticism and salvation history must not be divided from one another in Pauline thinking. In Galatians, Gentiles are included as part of Abraham’s family in Christ, but this does not nullify Torah. Rather, Torah also finds its climax in Christ.

One should hope that by following the lines of thought in this book, they may come to a better understanding of Paul’s letters and be provoked to think further about how best to interpret them. For example, Bird seems to be on the right path regarding Paul’s view of the Roman Empire. It is clear that there are significant consequences for following Jesus in Paul’s understanding. It is likewise reasonable to expect that the cult of Caesar could be included in Paul’s discussions of idolatry, although, as Bird’s examples show, clearer evidence for clashes between Jesus-followers and Rome may be found in second-century texts. Moreover, it must be the case that by calling Jesus “Lord” the implication, from both the Christian and Roman perspective, is that Caesar is finally not Lord. By taking Romans as an example, Bird allows readers to glimpse how Paul’s view of Rome may be understood in one letter. A fuller consideration of Paul’s thought on this issue would need to take into account other letters. In addition, given Paul’s immersion in Israel’s scriptures, one might wonder what relationship obtains between scriptural and imperial language. By considering these matters more fully, one might take Bird’s insightful remarks in further enlightening directions.

In light of Paul’s popularity, or infamy, in the early Christian movement, one might also think alongside Bird in order to further his work beyond strictly Pauline studies. This may be done particularly well with regard to the partings of the ways. Such terminology has become a standard way of describing the process of separation between Judaism and Christianity in the first few centuries. When parting is used in the singular, it may imply a simple, one-track separation that struggles to make sense of the tangle of positions on early Christian and early Jewish relations which are reflected in the early centuries of the Jesus movement. Bird employs parting in the singular in chapter 4 while studying a single event, namely, the conflict with Peter in Gal 2:11–14. Since only one event is in view, parting is entirely appropriate. However, there is a more noteworthy observation to be made about Bird’s terminology. He speaks not of a parting of the ways but rather a parting in the ways. The preposition is aptly chosen when describing the in-house conflict portrayed in Gal 2, but such terminology should give pause to those studying other early Christian documents. Should other texts that are employed in discussions of the partings of the ways be used instead to describe partings in the ways? If so, at what point, and on what basis, can a parting in the ways be differentiated from a parting of the ways? While studying an event in the middle of the first century, the language of chapter 4 may help readers to think further about the anomalous relationship of other Christians and Jews (to use potentially anachronistic terminology) throughout the first and second centuries.

An Anomalous Jew is not an introduction to Paul but provides a useful map of contemporary Pauline studies along with insightful explorations of issues relating to Paul and his social world. Along the way, Bird does not lose sight of the importance of Paul’s theological, and particularly christological, convictions for framing Paul’s interaction with the surrounding world. Advanced undergraduate and postgraduate students, scholars, and interested pastors and lay readers with some background knowledge will find this volume exciting, enlightening, and edifying.