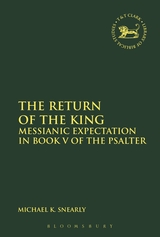 Michael K. Snearly’s revised doctoral dissertation, The Return of the King: Messianic Expectation in Book V of the Psalter, is one of the most recent and substantive contributions to the “canonical” or editorial-critical study of the Psalter. Snearly’s work focuses particularly on Book V (Pss 107–150) and argues the following thesis: “I contend that there is a purposeful arrangement of psalm groups in Book V and that this arrangement should be interpreted as signaling a renewed hope in the royal/Davidic promises” (p. 3).

Snearly begins with methodological issues. His thorough interaction with and rebuttal to the method’s skeptics (pp. 10–17) provides a great service to its practitioners, as the method currently faces a “crisis of credibility.” Also noteworthy are the pitfalls he highlights that must be avoided if the method is to remain credible (pp. 18–19). The greatest contribution of these chapters, however, is Snearly’s own development of the method. He provides it with a more solid linguistic foundation by finding in text-linguistics and poetics support for the oft contended notion that the Psalter can be read as unified text (pp. 39–50). Further, his study seeks to consistently apply a criterion that gives more objective footing to the method’s results: moving “beyond demonstrating similarities among proximate psalms to showing that those similarities do not occur with the same frequency in other parts of the Psalter” (p. 19).

An important aspect of Snearly’s study is the idea that Book V is part of a storyline discernible in the Psalter. Though many will remain unconvinced of this claim, Snearly does make it more tenable than previous studies by grounding it in narrative theory, arguing that the Psalter is a “multiple focus narrative” (p. 84). Snearly considers Pss 1–2 (which together depict an exemplary Torah-meditating king) and 89 to be the most significant psalms in the storyline prior to Book V (p. 79). In light of previous studies that make the opposite claim (à la Gerald Wilson), noteworthy is his contention that Ps 89 functions positively in this storyline. Support for this claim is the final supplication for Yahweh to “remember” ( זכר ) his anointed in vv. 47–52. This supplication indicates that the psalm ends on a hopeful note about the promises made to David (p. 98). Thus, prior to Book V Yahweh appears to have forgotten his covenant with David, “but his covenant loyalty ( חסד ) is eternal ( עולם ), so there is reason for hope” (p. 98).

Turning to Book V, Snearly argues that it is divided into four psalm groupings. He

The dominant theme of Pss 107–118 is Yahweh’s eternal covenant loyalty. Either חסד or עולם occurs in “every palm of this corpus, and, moreover, they are integral to the interpretation of each psalm” (p. 120). An inclusion that includes this dominant theme even brackets the unit (Pss 107:1; 118:29) (p. 110). The importance of חסד and עולם in Pss 107–118 suggests that this group functions as a response to Ps 89, affirming the Davidic hope that concludes that psalm. The Davidic cluster in this section, Pss 108–110, sends the message that “David is back!” (p. 127).

(p. 133). Given that the psalm’s dominant theme (i.e., Torah) is unique to Pss 119 in Book V, he contends that Ps 119 acts “as its own macrostructural unit within Book V” (p. 137). This “psalm group” contributes to the Psalter’s storyline, argues Snearly, by recalling and bearing witness to the reemergence of the exemplary Torah-meditating ruler of Pss 1–2 (pp. 137, 139).

The next psalm group consists of the Songs of Ascents (Pss 120–134) and Pss 135–137. The group’s cohesiveness is demonstrated especially by five key-word links that bind it together ( ישראל ,ירושלם ,ציון ,שיר , and מעלה ), features that occur far less frequently elsewhere in Book V (pp. 145–147). Further evidence that Pss 135–137 should be incorporated in this group is that, when included, the group is “bookended by similar psalms . . . written from the perspective of exile” (Pss 120 and 137) (p. 147). The significance of this group lies particularly in its emphasis on Zion (pp. 150–151). Observing the connection between David and Zion in the important Ps 132, Snearly argues that the message arising from this third group is that Yahweh has “not abandoned Zion or his king,” the program outlined in Pss 1–2 (p. 153).

The primary link binding Pss 138–145 together is the shared author designation לדוד. There are also a number of parallels with Book III and Pss 1–2 (particularly in Pss 144 and 145) that create cohesion within this group (pp. 160–167). The latter parallels are particularly significant since they show that “the end of the Psalter mirrors the beginning” (p. 168). The Psalter begins and ends with a focus upon Yahweh’s establishment of his anointed over his earthly kingdom (p. 169).

Psalms 144–145 serve as a conclusion to Book V, while Pss 146–150 function as a conclusion to the Psalter as a whole (p. 184). Snearly argues that the latter group fittingly concludes the Psalter because of verbal and thematic correspondences with its introduction (Pss 1–2) (pp. 178–181). The purpose of this “final hallel” is to conclude the Psalter in a climax of praise grounded in the storyline of the Psalter, with its focus on Yahweh and his anointed “who form a people in the midst of a hostile world and extend their kingdom over unruly nations” (p. 181).

The Return of the King provides a great service to the disciple of editorial criticism as it pertains to the Psalter. Perhaps its greatest contribution lies in the area of methodology. Snearly’s rigorous defense, development, and application of the method is sorely needed given the skepticism that still surrounds it in Psalms studies. I suspect that Snearly will make not a few new converts to the method with this offering. While certainly a scholarly work, this book would serve as an excellent introduction for any student or pastor who is new to the method and looking for an exemplary model of how it should be properly applied. If the book has a weakness, it is (at least from the present reviewer’s perspective) the argument that the Psalter exhibits an intentionally crafted “storyline.” A whole host of questions related to the Psalter’s “shaping” would need to be addressed before such a claim could be convincingly made. Further, the claim would need to be based upon more than three, albeit significant, “seam” psalms (1–2 and 89). However, overall, Snearly’s impressive work is an important and welcome contribution to Psalms studies.