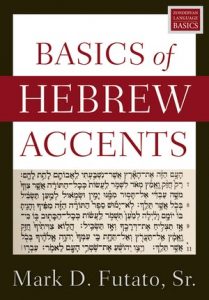 Mark D. Futato, Sr. earned a Master of Divinity from Westminster Theological Seminary and a Master of Arts and the Doctor of Philosophy degree in Semitic Languages and Literature from The Catholic University of America. He serves as the Robert L. Maclellan Professor of Old Testament at Reformed Theological Seminary in Orlando, Florida, and the founding host and teacher for the Daily Dose of Hebrew website. He has authored numerous journal articles and books, including Beginning Biblical Hebrew and the Psalms volume in the Cornerstone Biblical Commentary series.

Modern editions of the Hebrew Bible reproduce a system of vocalization and accentuation developed and preserved in Tiberias by medieval Jewish scribes known as the Masoretes. While many pupils study the vowels when learning Hebrew, fewer grasp the mechanics and benefits of the Hebrew accents. Mark Futato’s Basics of Hebrew Accents aims to correct this deficiency. In five chapters, Basics of Hebrew Accents introduces the Tiberian Hebrew accent system’s symbols, functions, and practicality.

Chapter one introduces the symbols and names of the Masoretic accents. Futato surveys three roles for the accents. The accents indicate syllable stress, suggest the sense of the text, and guide the chanting of the text. Indicating syllable stress aids with proper pronunciation. Accents separate and join words to create phrases and clauses and form syntactical constructions. For the chanting of the text, the accents serve as cantillation marks. This function relates to the practice of the public singing of the Hebrew Bible, usually in Jewish synagogues. Before turning to a detailed study of the accents, Futato isolates the soph pasuq, maqqeph, and paseq symbols. Though these symbols relate to the accents, they do not perform all three roles of stress, sense, and singing. Soph pasuq ends a verse, maqqeph joins words, and paseq always appears with a conjunctive accent and “indicates the need for a slight pause” (pp. 28-29).

Although the accents guide readers in pronunciation, interpretation, and cantillation, Futato’s book primarily investigates the second role of suggesting the sense of the text. In chapters two through five, Futato demonstrates how the accents help one understand the meaning of the Hebrew Bible. Chapters two through four cover the accents of the “twenty-one” books. This system pertains to every book except Job, Proverbs, and Psalms. Chapter two explains the four groups of disjunctive accents. These accents separate words and constitute a four-level hierarchical system where the strongest accents, silluq and atnakh, govern portions of a verse with weaker disjunctives. Chapter three treats the conjunctive accents, which join or group words together. The discussion of exegesis in chapter four demonstrates the practicality of accents for interpretation with examples from Genesis and Deuteronomy. Futato highlights Isaiah 40:3a, Numbers 13:33a, and Proverbs 31:1 as examples of apparently incorrect accentuation by the Masoretes.

Chapter five briefly tours Psalm 29 to demonstrate the modified system of “the three books” of Job, Proverbs, and Psalms. These “poetic accents” present a three-level hierarchy and encompass fewer symbols than the “twenty-one” books but also includes unique accents. Ole weyored, unique to “the three,” provides the strongest separation for longer verses, while atnakh continues to divide shorter ones. These major breaks tend to correspond with poetic lines and Hebrew parallelism (p. 94).

Basics of Hebrew Accents has several strengths. First, the author presents his material clearly. Unfamiliarity with the accents hinders a student from more advanced studies (p. 13). To overcome this obstacle, Futato previews, explains, and recaps his teaching. He writes simply and directly. Charts, symbols, and examples from the biblical text fortify the author’s clarity.

Second, Futato builds on and recommends prior Masoretic scholarship from the late 19th century to the present. He frequently references Yeivin’s standard, comprehensive introduction to the accents (1980) as well as Price’s syntax of the accents (1990) and five-volume concordance (1996). Futato also shares insights from classic works by Wickes (1881) and Davis (1900). He recommends the chapter on the accents in Fuller and Choi, Invitation to Biblical Hebrew Syntax (2017). He links to recent online articles by Barrick (2007) and Robinson and Levy (2002). Basics of Hebrew Accents simplifies and summarizes the work of earlier authors while also laying the groundwork for digging deeper.

Third, Futato equips readers with practical tools for analyzing the accents. Basics of Hebrew Accents suggests manually structuring the biblical text with a word-processing computer program by indicating breaks after disjunctive accents, printing the results, and then labeling them by hand (pp. 53-55). The book demonstrates the value of sister tools in Logos Bible Software, showing how cantillation analysis graph and documentation tools in Logos can represent the relationship between the accents (p. 53). The Logos version of Basics of Hebrew Accents enhances the practicality of the book for students and scholars. Hyperlinks will open online PDFs in a web browser. Relevant results from the book appear in searches across one’s Logos library. Right clicking a word opens other treatments from one’s Logos resources. Hovering the cursor over a Scripture reference yields an instant preview of the passage.

Fourth, Futato highlights the difference the accents make in English translations. For example, the NIV’s translation of Genesis 1:28, “Be fruitful and multiply; fill the earth” effectively portrays the conjunctive accent joining פְּר֥וּ (pᵉrû) to וּרְב֛וּ (ûrᵉḇû) with “Be fruitful and multiply,” while the semicolon represents the disjunction between וּרְב֛וּ (ûrᵉḇû) and the final clause of the verse, וּמִלְא֥וּ אֶת־הָאָ֖רֶץ (ûmilʾû ʾeṯ-hāʾāreṣ), “fill the earth” (p. 48).

If the book has a weakness, it is a lack of practice exercises. However, the second appendix points the way to such work, and the clear examples throughout the book suffice to demonstrate the author’s points. Provided that students continue interacting with the accents, I concur with his own assessment: “Some readers of this book will not go beyond the knowledge they have attained from this study. If they do not, I contend that they will be better interpreters of their Hebrew Bible through the modicum of knowledge they have gained” (p. 105).

Basics of Hebrew Accents is an excellent book for beginning or reviewing the Hebrew accents. Older works by Wickes and recent works by Yeivin and Price may be daunting to students with little knowledge of the accents. The Fundamentals of Hebrew Accents by Sung Jin Park is a new textbook with exercises but written for intermediate students. Futato’s book fills the need for a simple on-ramp to the accents. It can equip students with a practical level of competency or serve as the gateway for more detailed study. The book would be useful alongside a grammar for any level of biblical Hebrew. The professor or student may wish to create additional exercises to apply Futato’s toolkit to verses and sections of the Hebrew Bible, marking major accents and noting disjunction, conjunction, and exegetical significance. I hope Futato’s Basics of Hebrew Accents is adopted widely by professors and read and studied by those who have not yet experienced the help and joy of reading with the Masoretic accents. 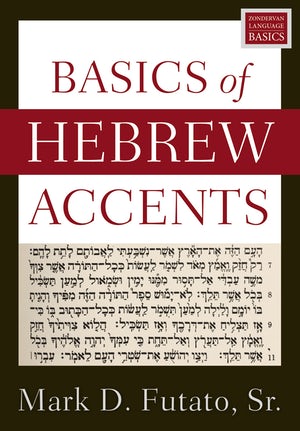