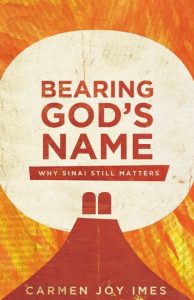 Carmen Imes is Associate Professor of Old Testament at Prairie College in Three Hills, Alberta, Canada. She completed her PhD in Biblical Theology (Old Testament concentration) under the direction of Daniel I. Block. Imes has authored Illustrated Exodus in Hebrew (GlossaHouse, 2018), Bearing YHWH’s Name at Sinai (Penn State University Press, 2019) and has contributed essays for Discovering the Septuagint (Kregel, 2016), Dress and Clothing in the Hebrew Bible (T & T Clark, 2019), and Write that They may Read (Wipf & Stock, 2020).

Contrary to what many readers might imply from the subtitle of the book, Imes’ primary concern is not to enter into the fray by offering an opinion on the role of Mosaic Law in the life of the believer today, but rather her focus is on providing a reinterpretation of and then practical implications for the “Name Command”: “You shall not take the name of the LORD your God in vain…” (Exod. 20:7 ESV). She claims that reinterpretation is necessary due to the fact that the rendering of the original negative command (lö´ tiSSä´) does not do justice to the primary meaning of the verb, that is, “to lift, bear or carry.” Once this is explained and defended (pp. 48-52), the rest of the book deals with the practical implications of this command for Israel and for any saint who is called by YHWH’s Name. She also demonstrates how Jesus modeled perfect compliance with this command during his earthly ministry (pp. 136-49). So, while Imes does not endorse a strict adherence to the Mosaic Law or to a reinterpretation/reapplication of the Law (in its entirety or in part), she convincingly argues that Sinai still matters.

In the brief introduction Imes addresses the skeptic who may not accept her assertion that the “differences [between ancient Israel and the contemporary believer] cannot erase the fundamental connection between their ancient story and [our] own” (p. 2). Advocating a re-engagement with the metanarrative of the Old Testament, she directs her attention specifically to an investigation of the Sinai narrative (Exodus 19 – Numbers 10). Acknowledging that many in the Church today are ambivalent towards or have rejected the relevance of the Old Testament, in the remainder of the introduction Imes addresses the misperception of the dichotomy between Law and Grace and invites the contemporary church to follow the example of the early church (pp. 2-5).

The book is divided into two equal parts: Becoming the People who Bear God’s Name (chapters 1-5) and Living as the People who Bear God’s Name (chapters 6-10). The first chapter offers insightful literary analysis of the Sinai narrative that draws out YHWH’s gracious purposes for renewing the Abrahamic Covenant with Israel and prepares the Israelites for a relationship built on trust by replacing their Egyptian slavery identity with an identity as the people of YHWH. Chapters 2-5 analyze the preparation for entering into the covenant, the structure of the covenant, the ratification and maintenance of the covenant, and the resources/accoutrements of the covenant, respectively. Given the title of part 2, chapter 6 ironically traces the history of Israel from Numbers 11 through the Exile which is largely the testimony of people who failed to bear God’s name in a worthy manner. However, Imes does point to events and people that offered glimpses into what it meant to bear the name of God rightly. Chapter 7 highlights the prophetic hope of a righteous remnant that would enter into a renewed covenant. In chapter 8 Imes appeals in large measure to Matthew’s witness to Jesus as the embodiment of the True Israel who in actuality bore the name of YHWH, viz., YHWH Saves (Jesus being the Hellenized rendering of the Hebrew Joshua). Chapters 9 and 10 speak of the missional impact of bearing the name of YHWH for the early church, including the Gentiles who are now included in the covenant community of YHWH.

Bearing God’s Name is an eminently readable distillation of her doctoral thesis in which her reinterpretation of the “Name Command” is justified by her careful exegesis and observations from the context of the ancient Near East. While evidence of that scholarship is still perceptible (specifically in well-placed insets that help the contemporary reader overcome the “foreignness” of the Old Testament setting), her primary concern is to help the church in general understand the ongoing relevance of the second of the Ten Words/Ten Commandments. The prohibition against bearing the name of YHWH in vain is much more significant than the traditional understanding of the prohibition to avoid speaking/swearing/cursing while using the Name. Moreover, as this book makes manifest, the consequences of keeping or violating this command becomes an integral part of the narrative that runs from Sinai through the End of the Age. Imes’ line of reasoning is interspersed throughout with practical implications as to why Sinai still matters for the church. Chief among her concerns in this vein are the ethical and missional ramifications of bearing God’s name rightly, as she asserts, “The fact that God has revealed to us what pleases him is one of the most gracious gifts–it’s an invitation to know him, to become like him, and therefore to be part of his mission” (183).

Integral to her insistence that Sinai still matters is the claim that the New Covenant stands in continuity with the Old Covenant which was initiated with Abram (Genesis 15) and ratified by Israel at Sinai (Exodus 24) and renewed on the Plains of Moab (Deuteronomy, with the ratification ceremony expressed in 26:17-19) (61-64). Imes notes that Deuteronomy has elements that correspond to Hittite suzerain-vassal treaties that were employed during approximately the same time period as Moses preached Deuteronomy (following the identifications used by Kenneth Kitchen and Meredith Kline). While I agree with the basic sentiment that Deuteronomy’s constituents have parallels to those in the Hittite treaties, I have argued that not only Deuteronomy’s constituents but also its structure actually follow the basic organizational structure of those treaties (cf. Steven W. Guest, “Deuteronomy 26:16-19 as the Central Focus of the Covenantal Framework of Deuteronomy,” PhD diss., The Southern Baptist Theological Seminary, 2009).

Imes correctly maintains that the “Renewed Covenant” stands in continuity with the Old Covenant, that is, the New Covenant is not God’s “Plan B” (pp. 127-31). She states that New Testament church sees itself “in continuity with the Old Testament people of God” (5). And near the end of the book she observes, “The New Testament does not detach itself from this story [that began at Sinai]” (187). Rather, she affirms, “Future generations may be included in the covenant simply by embracing it with faith and responding to it with obedience” (108).

There is just one more nuance that I would like to discuss in relation to this last excerpt, which ties back in to my initial paragraph of this review. That is, with respect to the book’s subtitle, one might expect some discussion as to how the Mosaic Law should inform the believer’s practice. As noted, this is largely absent, and the general tenor of this book would lead one to understand that Sinai is more concerned with becoming a people who bear God’s name well rather than keeping a list of rules and regulations meticulously. But there are occasional “mixed messages” that one might detect. For instance, on the final page of the book Imes writes, “Jesus shows up to model for us how to bear Yahweh’s name by obeying perfectly the law given at Sinai” (187). This statement, along with the final excerpt in the previous paragraph, seems to place a premium on obedience. The question remains: “Obedience to what?”

Imes’ book has much to commend for its intended audience of lay people, students and church leaders. This is especially true for those who might be struggling with the question of how the Old Testament should inform the ethics and mission of the church. This book offers a corrective to those who hold that there is a discontinuity between the Old Testament people of God and the Church Universal. It also addresses the mistaken perspective that there was a fatal breach in the Old Covenant that required a radical break (that is, a different kind of covenant). Moreover, Imes echoes her doctoral mentor’s favorite theme that Law is infused with and is an expression of the Law-giver’s abounding grace which is a welcome contrast to the disposition towards the Law that is promulgated by many in the contemporary church. 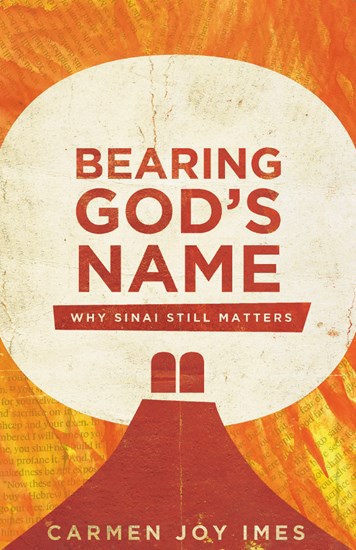