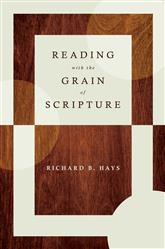 Richard Hays is Professor Emeritus of New Testament of Duke Divinity School. He is the author of several books, one of the most notable being his 1989 Echoes of Scripture in the Letters of Paul. This book is a set of twenty-one essays generally dealing with the subject of hermeneutics, representing something of the capstone of Hays’s career, a highlight reel of both recent writings and others culled from previous decades. They are very much a collection commemorative of an illustrious presence in the field of New Testament studies, with each representing some of Hays’s highest-level writing and strongest argumentation relative to each issue discussed.

The book is divided into four parts, proceeding in stepwise fashion as Hays moves from the groundwork of interpretive method into the person of Jesus himself and how he has been understood by scholars, into Pauline theology, and finally into the broader New Testament as a whole and the theology that characterizes it. The essays, as Hays notes (p. 3), follow six recurrent themes, namely narrative analysis, figural coherence between the Old and New Testaments, the centrality of Jesus’s resurrection, eschatological hope, approaching texts with humility and trust, and the importance of reading scripture within and for the community of faith.

Part one begins with a reflection on the task of interpretation, with four essays addressing the unity and diversity of the scriptural narrative. First, he critically reviews the effects of higher criticism on the idea of unity among biblical texts, and illustrates how texts viewed as disjunctive actually “demonstrate a surprising coherence” (p. 22). Second, he explores the possibility of a renaissance in “theological exegesis”, that is, reading scripture as a person of faith through the lens of faith. He attests that theological exegesis “is a practice of and for the church” (p. 36), which “attends to the literary wholeness of the individual scriptural witness” (p. 37). Third, he discusses the central role of Jesus’s resurrection, noting scholarly engagements with it and explaining how reading in light of the resurrection transforms how a text is understood. Fourth, he elucidates his idea of figural reading, which establishes a connection between two texts in a way that an earlier text signifies not only itself but also a later text, while the later text involves or fulfills the first. This “retrospective…pattern of correspondence” leads to a discernment of an intricate coherence between narratives (p. 74).

In part two, Hays explores the problem of knowing the historical Jesus through three reviews of scholarly approaches and an exceptional essay with his own reconstruction of Jesus. He initially takes on the methodology and conclusions of the “Jesus Seminar”, reflecting that “if Jesus said only the sorts of things judged authentic by the Seminar, it is very difficult to see how he could have been mistaken by Jewish and Roman authorities as a messianic pretender who needed to be executed” (p. 97). Hays then evaluates the methodology and contributions of N.T. Wright, both applauding Wright’s analytical depth and attention to historical context and also critiquing his methodological “over-systemization” (p. 117) and lack of focus on “narrative identity” (p. 119). He then turns to an assessment of Catholic scholarship, providing a mixed review of Cardinal Ratzinger’s treatment of Jesus. Hays applauds Ratzinger’s focus on Jesus’s divine identity, but critiques him for “downplaying the apocalyptic content of Jesus’s message” (p. 126). Lastly, in what is perhaps his strongest essay, Hays proposes his own methodology and guidelines for locating the Jesus of history, attending to the context, narrative logic, representation of Jesus by each of the available sources individually.

Part three includes seven essays on Paul, the first six on theological issues and the last concerning Paul’s relationship to his portrayal in Acts. In his exploration of Paul’s Christology and soteriology, Hays draws attention to the role of narrative. He notes that for Paul, Jesus’s identity is “disclosed in a seamless narrative running from creation to the cross to the resurrection to the eschaton” (p. 151). Similarly, Hays asserts that Paul’s soteriology is “unintelligible apart from a narrative framework” (p. 170). Hays then explores Paul’s apocalyptic thought and how this influences his relationship to Judaism, noting that for Paul, Christ “leads him not to a rejection of Israel’s sacred history but to a retrospective hermeneutical transformation of Israel’s story” (186). Hays’s intertextual emphasis also comes out in three essays dealing with Romans, in which he examines Paul’s pneumatology, his attitude toward Torah, as well as his overall approach to Judaism and the place of Israel in God’s plan. In his final essay, he questions the idea of a dissonance between Paul and the Lukan portrayal of him, examining Old Testament references common to both Acts and the Pauline corpus.

The six essays of part four begin with an exploration of the Christology of Revelation, with Hays arguing that the imagery of the book is best grasped through a reading that treats it as an intertextually rich literary whole. Hays then includes two essays in response to other scholars, with the first seeking to refute the idea that Hebrews proposes a supersessionist theology, and the second critiquing Bultmann’s view of Pauline anthropology. This is followed by creative treatments of the different roles of law both in the Old Testament and in modern society, as well as a reading of Romans in tandem with the Nicene Creed, noting confessional elements linking the ecclesiology of both. Hays finishes with an essay on the importance of eschatology for understanding scripture, and how a biblical perspective on eschatology can be distinguished from cultural aberrations and perversions.

Hays concludes with an encouraging call to move from a hermeneutic of suspicion to a “hermeneutic of trust”, which he defines as “a way of seeing the whole world through the lens of the kerygma”, a posture of reading and exegesis which relies on God in the midst of mystery and yet-unfulfilled hopes (p. 399). One of Hays’s greatest strengths is his winsome but rigorous way of analyzing narrative. This is a common theme shining through each essay, whether speaking of the larger theological narrative of the canon or the narrative elements of individual texts. Hays’s emphasis on intertextual relationships also greatly accents an otherwise exemplary collection.

From a critical standpoint, a quibble for some readers will be that a number of essays are dated, and thus do not represent the current state of the field. For example, Hays often engages with scholars like Bultmann and Crossan in a manner reflecting a previous generation of scholarship. Such engagements highlight Hays’s own distinguishment of himself from other scholars but limit the book’s usefulness to contemporary readers. Even so, the essays were substantive, and testify to the difference that his work has made. This book is certainly recommended for those seeking to listen to the resounding voice of a scholar with a high view of the text, and one who holds a balance between churchman and academic. It will make an excellent addition to the library of one who wants to know how biblical studies came to where it is today, and to what foundation it owes its future trajectory.

The University of Edinburgh