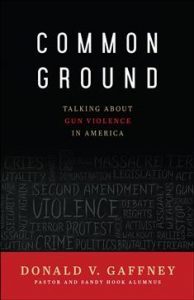 Donald Gaffney is a Disciples of Christ minister and alumnus of Sandy Hook Elementary School. Since the massacre in 2012, Gaffney has been invested in conversations surrounding gun violence, including through support of the Sandy Hook Promise, a non-profit organization founded and led largely by family members connected to the Sandy Hook shooting with the goal of decreasing gun violence. As the title would suggest, Gaffney attempts to address the topic of gun violence through a call for self-reflection, mutual understanding, and productive conversation rather than through explicit advocacy for a singular political agenda.            Common Ground contributes a unique voice to the politically heated topic of gun violence as it provides regular opportunity for the reader to reflect on forces which often undergird espoused positions.

In the first two chapters, Gaffney focuses on how perspectives on gun violence have evolved, first through individual narratives and then in the broader narrative of American culture. He focuses on the narratives of Suzanna Hupp and Gabrielle Giffords, both of whom suffered from gun violence, yet arrived at differing positions as to how gun violence can be prevented. These narratives provide a framework for advocates of both sides of the gun debate to sympathize with each other’s position and engage in civil conversation.

In the third chapter, Gaffney addresses contemporary gun violence statistics, gun legislation, and gun policy advocacy groups with a desire that the reader look past abstract statistics and recognize the stakes of gun violence and its potential prevention. Although he does try to maintain a “common ground” tone, he honestly discloses his support for Gabrielle Giffords’s gun control advocacy efforts and makes a case for gun control legislation. In this context, he warns about the use of statistics, writing “one noticeable effect of studying data is the loss of a sense of humanity” (p. 46). Although it is most certainly true that an emphasis on statistics can lead to abstract dehumanization of human stories, a case can certainly be made that statistics have an important role to play in discerning which national policies would most likely mitigate gun violence. Nonetheless, Gaffney desires that the reader sympathize with the narratives of individuals involved in gun violence rather than numerical data. He then attempts to make an argument for gun control by comparing the largely successful results of automobile safety legislation to potential gun control legislation.

Gaffney advances his position throughout the fourth chapter as he seeks to explicate the biblical concept of violence. Here he navigates through the complex concept of violence and the Bible, ultimately concluding that, although God engages in violence as a necessity of his cosmic justice, God abhors violence and that Christians are called to sacrificial love. Gaffney asks what appears to be a pivotal question, “Are there ever times when evil needs to be faced with violence?” (p. 84). However, he then states that this question is often debated and that it is not within the scope of the book. He does implicitly answer this question, at least in part, by demonstrating how individuals have misused the Bible in support of violence. This line of thought certainly implies that there is a biblical standard regarding the use of violence, but direct and extended discussion on this topic would have been helpful to foster the conversation.

In the final two chapters, Gaffney argues that Christians should maintain allegiance to God before state, which will lead them to oppose violence and, consequently, advocate against gun culture. He links Christian gun rights advocacy with nationalism and epitomizes the basic pro-gun argument with the statement, “It takes a good guy with a gun to stop a bad guy with a gun” (p. 87). He attempts to refute this statement by explaining that all people have the potential for good and evil, thereby seeking to dispel the myth of “good guys” and “bad guys.” He concludes that all people are guilty of violence, at the very least through words. This line of thought echoes the words of Jesus in the Sermon on the Mount, as the one who harbors hate in the heart and externalizes hate through speech is guilty of murder in the eyes of God. This is an important theological point, as it not only renders all individuals as morally guilty of great violence, but it demonstrates the potential for individuals to commit violence in the world as an outworking of this internal reality. However, Gaffney does not in this chapter differentiate the spiritual culpability of “violent” speech from the civil culpability of physical violence. As this book primary focuses on issues related to public policy, the distinction between physically violent and non-violent sins is one that is worth noting. Despite this fact, Gaffney’s discussion in this chapter does well to foster introspection and discussion on the culture of hostility, which is indeed related to physical violence.

Common Ground has much to offer in providing a framework for conversation between Christian laypeople who advocate for and against gun control. Although Gaffney takes a definitive position in this debate throughout the book, he does discuss both sides and provides ample ground for reflection and mutual understanding. The goal of establishing “common ground” would have been more fully achieved with a more nuanced presentation of positions opposed to his own; however, Common Ground is nonetheless thought-provoking and may indeed be a useful text for the lay Christian to begin thinking about gun violence in America. In attempt to maintain the presented spirit of the book, this would best be done in community with Christians of various perspectives on the topic at hand. Gaffney is most certainly correct that all Christians desire the cessation of needless violence, but the best solutions unto this end are likely to come through reason, community, and genuine mutual understanding between those who differ ideologically. 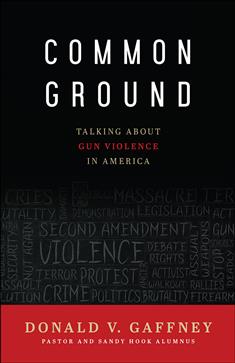