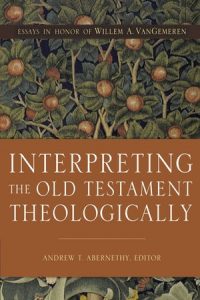 The present volume is a Festschrift in honor of Willem A. VanGemeren, Professor Emeritus of Old Testament and Semitic Languages at Trinity Evangelical Divinity School. To honor his legacy, as indicated by the title, the focus of the essays is the theological interpretation of the Old Testament, a task over which VanGemeren has labored for decades. The movement known as Theological Interpretation of Scripture (TIS) has garnered more widespread support in recent years. VanGemeren is, in many ways, a forerunner of this movement—a point noted by several contributors.

Following an introduction by the editor (pp. 17–21), this volume’s 21 essay contributions are divided into three sections: 1) Theological Witness Gleaned Through Interpretive Practices, 2) Theological Witness in Specific Old Testament Books, and 3) Theological Witness Amidst Community. Both a Scripture and an author index follow the essays. The group of contributors is composed primarily of Old Testament scholars, but also includes one New Testament scholar, one systematic theologian, and one former seminary president who now occupies a pastoral position. Each contributor was asked to allow the following Christological and ecclesiological questions (respectively) to inform his or her individual chapter’s topic: “how do we move from an Old Testament text to Christ?” and, “how do the Scriptures given originally to Israel address the Christian church today?” (p. 20).

The first section contains six chapters reflecting various “interpretive habits” viewed as fundamental to a theological reading of the Old Testament. In chapter 1 (“Original Context and Canon”), John Monson proposes a “context-canonical” model for interpretation that considers the land, material culture, and cognate texts of the biblical authors, in addition to the larger framework of the Old Testament. The burden of the article, however, is a theology of land. In chapter 2 (“Genre and Theological Vision”), the editor, Andrew Abernathy, provides an excellent biblical and theological foundation for the appreciation of genre in interpretation. Going beyond simply stylistic variation, he argues that different genres invite readers to experience, and live in light of, the multi-layered reality of the biblical text. Chapter 3 (“Theological Dimensions within Biblical Books: ‘What is the Message from the LORD?’”), by Richard Schultz, explores the different dimensions of context for theological interpretation. These include the immediate context within the biblical book (with a discussion of the role of literary structure) and the broader canonical context. In chapter 4 (“The Tri-Partite Old Testament Canon and the Theology of the Prophetic Word”), Stephen Dempster argues that the bond between the Former and Latter Prophets is essential for understanding key themes in the Prophetic corpus. Separating these sections (as is done, for instance, in the ordering of English Bibles) obscures the patterns and continuities that emerge from a unified reading. Next, Daniel Timmer (in “The Old Testament as Part of a Two-Testament Witness to Christ”) argues that the Old and New Testaments are a complementary and unified whole due to the divine authorship of Scripture. He describes a Christian reading of the Old Testament as “guided forward reading, in which various beliefs and conclusions (exegetical, dogmatic, etc.) feed back into one’s reading of the Old Testament, closing off some interpretive options and favoring others” (p. 101). He nevertheless acknowledges both unity and diversity in progressive revelation. In the final chapter of the section (“Theological Interpretation as a Traditional Craft”), Stephen Chapman calls for interpretation within the context of a community, a process he describes in terms of mentorship. This “craft-oriented approach” allows readers to depart from individualistic interpretations to be shaped instead by imitation and routinization of practices within interpretive communities. The kind of community the author has in view is both far and wide, spans location and time (especially the pre-modern period), and includes even Jewish interpreters.

The second section contains essays on specific books of the Old Testament as case studies for theological interpretation. In chapter 7 (“The Pagan Context of Abram’s Call and the Mission of the Church”), Carol Kaminski looks at Genesis to appreciate the polytheistic culture from which Abram originated. This perspective, she says, allows believers to better envision God’s gracious work in our own pagan culture. Richard Averbeck, in chapter 8 (“Reading the Ritual Law in Leviticus Theologically”), maintains that the sacrificial system outlined in Leviticus remains relevant for the New Covenant believer. Specifically, he looks at the sin offering, the Day of Atonement, and the food laws to demonstrate the centrality of God’s presence with his people, which ultimately finds its fulfillment in Jesus. In chapter 9 (“The First Principle of Wisdom in Deuteronomy: The Fear of YHWH as Allegiance to YHWH Alone”), Daniel Block surveys the fear of YHWH in Deuteronomy as an identity marker for God’s people. Just as with the original audience, the hearing of the Gospel in the Torah of Moses today should produce total allegiance to God (p. 164). The next chapter, by Lissa Wray Beal (“Setting the Table for Christ in the Elisha Narratives in 1 and 2 Kings”), synthesizes the ministries of Elijah and Elisha related to eating and drinking. These prophets, especially Elisha, prefigure the miraculous deeds of Jesus’ own ministry, as well as the greater meal, namely the institution of the Lord’s Supper. In chapter 11 (“A Theological Interpretation of the Cyrus Passages in Isaiah”), Bo Lim addresses the identity of Cyrus in Isaiah. Noting the various interpretive and methodological approaches, Lim concludes that a theological interpretation involves a multi-faceted view of Cyrus as a transitionary figure who is both “messiah” and “monster.” Thus, some of the salvation prophecies were fulfilled in the Persian period, while others look forward to a future resolution. In chapter 12 (“The Presence and Absence of God in Jeremiah”), James Hoffmeier looks to the prophetic word, rehearsals of the exodus, the exile, and the future for characteristics of God’s presence. This lays the groundwork for God’s ultimate presence in the incarnation. Chapter 13 contains a discussion by Anthony Petterson on the messiah in Zechariah (“Messianic Expectations in Zechariah and Theological Interpretation”). While Petterson rejects the idea of messianic overtones to the Angel of the Lord, he finds and traces the messianic theme in the shoot, kingship, and shepherd motifs. Mark Futato devotes chapter 14 (Psalm 8: A Christological Perspective”) to the exploration of Psalm 8 from a Christological, but not ‘messianic,’ reading. This chapter contains a fresh translation with many explanatory notes on the Hebrew text, in addition to a section on the literary structure and canonical context of the Psalm. In the final chapter of the section (“The Prayer of Daniel [2:20–23] in the Two-Testaments Scriptures”), Ron Haydon connects the motif of wisdom in Daniel to the wisdom in Colossians within a trinitarian framework.

The third section of the volume has a more communal focus, exploring topics such as ethics, missions, family, and ministry. M. Daniel Carroll R. begins with an assessment of the connection between Old Testament theology and ethics in the works of five scholars: Childs, Scobie, Goldingay, Brueggemann, and Andiñach (chapter 16, “Ethics in Old Testament Theologies: Theological Significance and Modern Relevance”). Weighing the similarities and differences between each of these authors, Carroll R. demonstrates that there is more than one way to develop the ethics of the Old Testament from its theology. In chapter 17 (“‘Live Such Good Lives Among the Nations…’: The Missional Impact of Old Testament Ethics in the New Testament”), Christopher Wright emphasizes the role of a missional hermeneutic for ethics in the lives of believers. Next, Richard Hess (in “The Family in the Old Testament as a Theological Model for Covenant Community”) surveys the biblical and archaeological data, in addition to the evidence from personal names, to show the family as a context for expressing devotion to God. This sets the backdrop for a concluding paragraph on Jesus’ role in his human family. In chapter 19 (“Typological Trajectories in the Epistle to the Hebrews”), New Testament scholar Dana Harris demonstrates how the author of Hebrews appropriates material from the Old Testament that already contained theological reflections on earlier historical events. Thus, she says, the typology in Hebrews is not sui generis, but rather, draws upon typological trajectories already present in the Old Testament itself. Kevin Vanhoozer, in chapter 20 (“Toward a Theological Old Testament Theology?: A Systematic Theologian’s Take on Reading the Old Testament Theologically”), reflects on various levels of Old Testament theological interpretation, providing two case studies from Numbers 12 and 22. He looks to Walter Moberly as a good model of sound theological interpretation. In the final chapter (“But, It’s Poetry! A Pastor’s Reflection on the Relevance of Old Testament Poetry”), Gregory Waybright describes the use of biblical poetry to provide pastoral care for those in emotional crisis. He summarizes a sermon he preached on Psalm 62 as an example.

As is evident from this all-too-brief summary, this book covers a plethora of topics, displaying the wide-ranging scope of theological approaches to the Old Testament. Especially helpful are several contributions that give space to the methodological issues undergirding TIS. This orients the uninitiated reader to the foundational tenets of the movement. Vanhoozer, for example, classifies various attempts at Old Testament theology in terms of “non-theological,” “weak,” and “strong.” What makes an evangelical Old Testament theology ‘weak,’ he says, is a refusal “to read the Old Testament in light of what is known of God in the communion of the saints” (p. 303). On the other hand, a ‘strong’ theological interpretation deploys proper theological categories involving “the nature, presence, and activity of the triune God” to “describe not only the content of Scripture but also the nature and purpose of the text itself, as well as its authors and interpreters” (p. 303). Vanhoozer’s discussion, alongside Haydon and Harris in particular, provides helpful insight into what is meant by theological interpretation.

Readers looking for a monolithic application of a unified approach, however, will likely be disappointed. In fact, some chapters appear to be at odds with one another. For instance, in his methodological discussion, Haydon emphasizes a Trinitarian hermeneutic of the Old Testament as a cornerstone for a faithful reading (see pp. 224–27). Chapman, on the other hand, states that though there is a valuable role for the creeds, Trinity, and Christology in a Christian reading of the Old Testament, “biblical interpretation can still be theological without them––or at least without making them the explicit and exclusive starting points in theological reflection” (p. 119). One may suspect that Vanhoozer would rank this kind of approach low on his taxonomy of theological interpretation.

Nevertheless, the volume as a whole succeeds in honoring an esteemed member of the interpretive community, Willem VanGemeren. Together, these essays invite readers to grow in communion with the Triune God and in community within the Church, through reading the Old Testament as Christian Scripture. 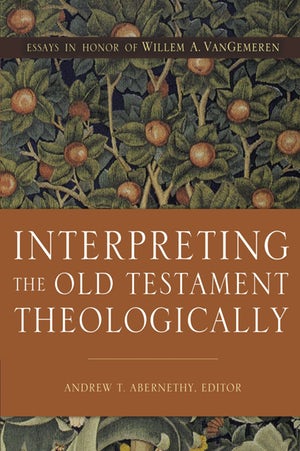