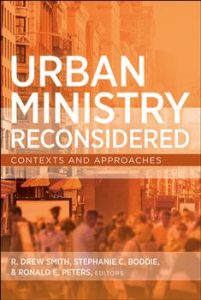 When one speaks of contemporary cultures, it is customarily understood that cultures are shaped by members of a particular society that share a set of practices and beliefs that are dominant or ubiquitous to that particular group. Additionally, when speaking of culture, it is also understood that culture also comprises the activities and values produced out of interaction with principal objects that include, but are not limited to, religious beliefs and practice. With that general classification in mind, the book Urban Ministry Reconsidered attempts to answer the question: what does it mean to minister to societal groups and cultures in urban spaces? The question is grappled by each contributor, who at the conclusion of their chapters suggests means by which ministries can provide or modify their ministerial approaches to an urban community’s context and needs.

Urban Ministry Reconsidered offers various insights that explore the complex and varied cultural contexts that have led to new conceptualization and arrangements for urban ministry. From the onset, a caveat is given as the editors make it clear that the topic of “urban ministry” is multifaceted and complex by the ambiguity of the terms “urban” and “ministry” since “there is no uniform understanding of what is meant” by such terms (p. 1). The book offers various essays from over thirty contributors who explore the topic of urban ministry in and out of the context of the United States while acknowledging that large numbers of the world’s population reside in urban settings. The book also explores various avenues and spaces for urban ministry within the context of large cities. However, it also includes exploration of settings not normally thought of as urban but remain at locations where a type of “urban ministry” can take place, such as prisons and university settings. Additionally, the book explores immigration issues, gun violence in the inner city, urban digital context, ministry in African churches in France, ministry to Ugandan youth affected by war, and public leadership to name a few.

Despite the broad range and varied context in which the topic of urban ministry is explored, the book’s overall focus and unifying theme remains constant as each contributor outlines various suggestions by which Christians can develop strategies to properly evangelize and assimilate in the content of urbanization’s fast-growing speed, intricacies, and reach. For example, chapter three explores “urban ministry approaches” that according to the author have, “tended to view cities as places marked by compromised good and unchecked evil.” More specifically, the chapter focuses on the grace that is required despite a city’s tendencies of wrong and evil, while pointing out some of the shortcomings of western missiology dualistic approaches. Indeed, the chapter proposes a new way of thinking about “incarnational ministry” (p. 28). The writer points out that “the urban context represents both fallen humanity and the triumph of human achievements” (p. 34). Therefore, it is within this dissonance that the church can bring complex and varied people into a knowledge of “saving grace” while they discover that grace together. Another significant chapter is chapter twenty, which proposes a different way of doing urban ministry. In particular, the chapter explores school voucher programs and the black clergy response. By focusing on educational inequalities within American, the writer suggests that school voucher issues provide a glimpse into a vast opportunity for church leaders to improve a system that could benefit all students (p. 175).

Despite the fact that the book contains over thirty chapters, there is an overall unifying theme. Each contributor outlines various suggestions by which Christians can develop strategies to properly evangelize and assimilate in the content of urbanization’s fast-growing speed, intricacies, and reach. Additionally, the authors of each essay suggest that such strategies must frame theological and sociological responses to the various economic, sociopolitical, and health issues faced by the societies explored. Urban Ministry Reconsidered offers insights that consider how complex and varied cultural contexts have led to new conceptualization and arrangements of urban ministry. The book surveys urban ministry with ample qualitative and quantitative research that offers numerous perspectives in a multitude of context with various authors proposing constructive ideas for change.

In summary, the authors underscore the different ways churches can and should search for policy restructuring and more effective agendas that promote human thriving (p. 11). However, the breadth and depth of what both terms “urban” and “ministry” imply, coupled with the multitude of social, geographical, economic, and political context explored, give the book its strengths and weaknesses. The topic of urban ministry is broad, complex, and too comprehensive to cover, but only in a tangential way, in a work of only approximately 320 pages. The book does not allow sufficient room to better explore each context with more depth and breath. Urban Ministry Reconsidered is inclusive in its global perspective and therefore would serve well in introductory sociology or anthropological class for anyone, especially those considering ministry in an urban setting. 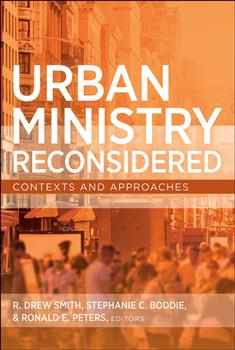