Costley, Angela. Creation and Christ: An Exploration of the Topic of Creation in the Epistle to the Hebrews. Tübingen: Mohr Siebeck, 2020, pp. 385, 94.00€, paperback. 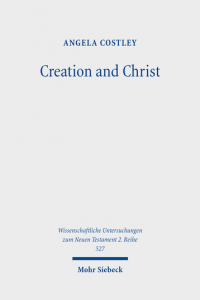 When thinking about what makes the Christology of Hebrews distinctive, perhaps the first image that comes to mind is that of Jesus as high priest. Other topics of perennial interest in the study of Hebrews include the intriguing utilization of the Sabbath and the deployment of tabernacle, temple, and other cultic imagery. Angela Costley draws attention to the important role played by references to creation in Hebrews and argues that the author of Hebrews employs these allusions to creation in order to portray Jesus as the creator who descends to earth in order to lead believers into God’s primordial rest. Creation and Christ is a revision of the author’s 2018 Ph.D. dissertation, which was completed at St. Patrick’s College in the Pontifical University of Maynooth, Ireland. Costley currently teaches Greek and Wisdom literature at St. Mary’s College in Oscott.

After establishing her research focus, Costley outlines the methodological tools that she will use in order to exegete creation language in Hebrews. Following a line of recent Hebrews scholars (e.g. Neeley, Westfall, and Dyer), Costley utilizes discourse analysis in order to bring clarity to the way in which the author of Hebrews orders their thought. Discourse analysis does not denigrate historical criticism but rather recognizes its limitations and offers a literary, historically oriented set of tools with which to examine ancient texts. When it comes to Hebrews, Costley dates the text generally to the last half of the first century (ca. 60–90 CE), but she does not think that Hebrews offers enough information to, for example, locate the text before or after the fall of the Jerusalem temple in 70 CE. The author is unknown, the geographical location is tentatively said to be in Alexandria, and the intended audience was likely to have been of Hellenistic Jewish origins (pp. 32–44).

The literature review is likewise expansive and can be found in chapter 2. This chapter more clearly outlines the topic of creation in Hebrews and highlights the need for Costley’s monograph by demonstrating the absence of another such book. Costley highlights other studies of Hebrews and discourse analysis, the application of narrative and rhetorical approaches to Hebrews, the relative absence of creation in thematic studies of Hebrews by Vanhoye and Lindars, and historical critical investigations into the author’s possible sources and dialogue partners. One of the nearest neighbors to Costley’s study is a 2009 chapter on the cosmology of Hebrews by Edward Adams (“The Cosmology of Hebrews,” in The Epistle to the Hebrews and Christian Theology, ed. Richard Bauckham et al. [Grand Rapids: Eerdmans, 2009], 122–139), but Costley rightly argues that more remains to be done on the theological contribution of creation to the argument in Hebrews.

Having clarified the need for her study and set forth the methodological tools to be employed, the remainder of the book turns to a thorough investigation of five passages in Heb 1–4. These are Heb 1:2–3; 1:10–12; 2:5–9; 3:1–6; and 4:1–11 (esp. 4:3–4, 9–10). The author of Hebrews opens the address by stating that God has spoken through the Son (Heb 1:2). Costley emphasizes that the Son is identified as the one “through whom (God) made the aeons,” which is the most reportable event in the exordium according to her discourse analysis (pp. 91–95). The identification of the Son in Heb 1:2–3 can thus be interpreted in terms of descent and ascent as the Son’s work of creation, purification, and session come to the fore at the start of the text. The allusion to the Son’s laying of the foundations in the scriptural catena (Heb 1:10) is likewise understood with reference to creation. Whereas the exordium works from creation to descent to ascent, the catena moves from the ascension to Christ’s descension and finally to his act of creation. The importance of Jesus’s role in creation and the presence of the descent-ascent motif becomes clearer in Heb 2:5–9 as Jesus is the only one for whom humanity’s intended original status applies in the present. Focusing attention on Heb 3:4, Costley argues that Jesus’s activity in creation provides one of the reasons for the Son’s superiority to Moses in Heb 3:1–6. Finally, God’s rest and the discussion of Sabbath in Heb 3:7–4:11 are interpreted with a view to God’s primordial rest, into which believers can enter due to the Son’s entrance ahead of believers as pioneer (pp. 269–287).

Costley enhances her exegetical arguments with a sixteen-page appendix justifying her translations of the chief passages examined in the book (pp. 299–314) as well as an additional appendix examining recent approaches to the macrostructure of Hebrews (pp. 315–323). A substantial bibliography follows along with indexes of sources, authors, and subjects.

Creation and Christ thus draws attention to an important topic that is too often overlooked in studies of Hebrews. By examining the relationship between creation and Christology, Costley sheds fresh light on the Son’s role in much of the first four chapters in Hebrews. By emphasizing the Son’s activity in creation from the exordium on, she uncovers the presence of a descent-ascent motif into which the presentation of Jesus as high priest may be fitted. In addition, Costley highlights several points of connection to the Wisdom of Solomon and the Epistle to the Hebrews. While the similarity between the portrayal of wisdom in Wis 7:26–27 and the description of Jesus in Heb 1:3 is regularly noted by scholars of Hebrews, Costley patiently and subtly places more sustained focus to parallels in the thought of Wisdom and Hebrews (e.g. pp. 76–77, 123–128).

An additional strength of the book is its thorough examination of nearly every imaginable nook and cranny that can be considered with regard to creation language in Heb 1–4. This thoroughness is evident even in the early chapters of the book on methodology and previous studies, where a sustained introduction to discourse analysis may be found along with a description of related studies that indicate the need for Costley’s study. When exegeting Hebrews, Costley’s book is similarly expansive in the ground that it covers, suggesting that the house in Heb 3:1–6 should be read with a view not only to the people of God but also with connotations of the sanctuary and of the cosmos. When studying creation language in the exordium, Costley provides a detailed examination of the word aion in Heb 1:2. She traces the development of the term’s meaning in the history of the Greek language before giving extended attention to Philo, Septuagintal translations, apocalyptic Second Temple literature, and some New Testament instances of the word. Such a consistently exhaustive study repays close reading, while simultaneously providing an important resource for other scholars of Hebrews.

In sum, Creation and Christ is an important addition to scholarship on the Epistle to the Hebrews that draws attention to an underexplored topic in creative ways. By exploring Christ’s role as creator in Heb 1–4, Costley offers fresh insight into how one understands not only the depiction of Jesus in the text but also its understanding of salvation. Costley’s book will be of particular interest to those who conduct research on Hebrews as well as the libraries who support them. 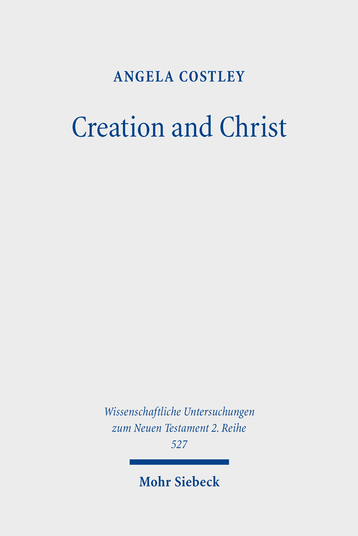