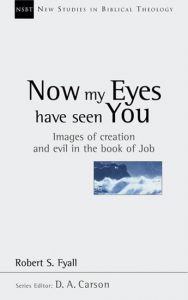 A continuation of 1991 dissertation, Robert Fyall, revisits Job creation theology. Dr. Fyall is a Senior Tutor in Ministry for the Cornhill Training Course, Scotland. He has taught Old Testament at St. John’s College in Durham, England.  In the present work, the author focuses on creation and evil that revolves around Behemoth and Leviathan. Fyall examines these figures in light of the ANE materials. He argues that Behemoth represents death and Leviathan Satan. He solves the tension scholars perceive with the disappearance of Satan after the initial chapters.

Now my Eyes have Seen You introduces readers to Job with a succinct introduction. Readers unfamiliar with Job will benefit from the thorough but brief history of research. The author describes his aim as a holistic depiction of creation and evil within Job (17). Fyall interprets the book of Job as a literary unit which differs from critical scholars. Thus, he rejects deconstructive interpretations and opts for a canonical interpretation. The book interacts with Job’s adoption of myth through the imaginative canonical process of inspiration (27-28).

In chapter two, Fyall surveys the legal material which gives coherence to the book. He focuses on Job 19:21–27. Chapter three and four examine the Images of Creation and Evil in the book of Job to discuss the implications of Behemoth and Leviathan in chapters five through eight.  Thus, in chapter five and six, Fyall focuses on Behemoth to explain how the reader should anticipate Behemoth from Job 3. Chapters seven and eight discuss Leviathan within the scope of Job and ANE material.  He concludes with the unity of Job from Job 42.

Fyall describes the tensions of creation and evil within the book of Job while defending the integrity of the text and author. First, he balances Job’s use of myth and theology in the book of Job. The author argues that the Job interacts with the surrounding culture to show Yahweh triumphing over the gods of the nations. Lastly, he demonstrates a cohesion narrative from the images of creation which establishes a picture of evil in the world.

At the end of the first chapter, Fyall introduces the topic of myth and theology with three observations. He observes first that the author uses creative motifs to present a distinct message (28). He argues that if Job used common mythology then it would be hard to maintain to the doctrine of revelation. Fyall doesn’t deny a common cognitive framework but comes close.  Recent works such as John Walton’s The Lost World of Genesis One argue for a common cognitive worldview. Fyall does not fully develop this point but simply states that the author must understand his genre and message. He assumes authorial conscience in drafting parallel literature so much that he neglects to develop this observation. He does provide a brief overview of Job and Canaanite myths in his appendix. Fyall covers a large amount of material with brevity and clarity in the first chapter. Cecil Grant finds him unable to balance the materials,[1] but she overstates the case. The first chapter establishes a solid foundation to cover technical details later in the book.

Second, the author argues that Job interacts with the surrounding worldviews to demonstrate the incomparability of Yawheh (28). Fyall develops this observation throughout the book and Daniel P. Bricker comments that he goes to great lengths to prove the intertextual links.[2] Although, Fyall provides substantial textual links; he fails to provide an iron tight case.  He builds upon his presuppositions that Yahweh is the one true God in the author’s mind. Fyall does not engage the history religions school but presupposes the image of creation demonstrates that the author interacts with the surrounding worldview. Evangelicals will agree to his presuppositions, but critical scholars will baulk at them. His argument that author gleans from the surrounding literature does not prove that Job argues that Yahweh triumphs over their gods.  Critical scholars could argue that the Job saw the gods of the nations as a reliable source of inspiration. Nevertheless, he presents valid conclusions that Job subjects the gods of the nations to weakness while the Yahweh remains sovereign.

Third, the allusions to Canaanite myths provide strong evidence for interpreting Behemoth and Leviathan supernaturally. The absence of Satan from the majority of the text of Job perpexles interpreters. Robert B. Chisholm compliments Fyall’s answer to the absence of Satan and the possible solution.[3] Fyall aids interpreters to the issue of creation and evil in Job where Job finds himself in a fallen world that turns on him. He answers the question with showing that Satan and death are working in the world, but God sovereign rules over the world.

Now My Eyes have Seen You provides an analysis of creation and evil in the book of Job.  Evangelical readers will benefit from Fyall’s synthesis of ANE literature with the biblical text.  Readers will be able to engage the sources and begin to think holistically about the book.  In an era of critical scholarship, Fyall provides a breath of fresh air to the pastor and theologian.  His analysis transcends sections of the text by incorporating the final form. He uses the theology of the final form to demonstrate continuity of the text. Fyall encourages a spiritual reading of the text by incorporating Behemoth and Leviathan throughout the book. 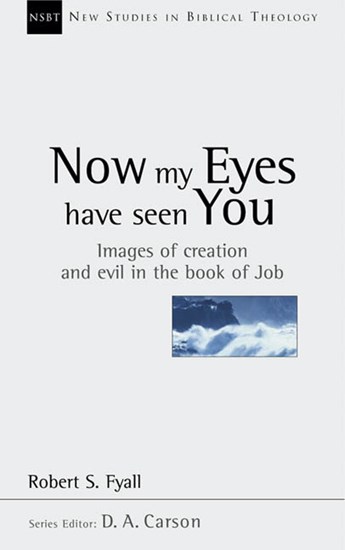