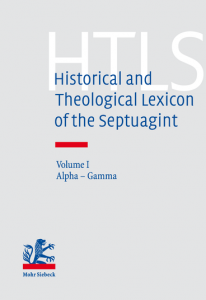 The Historical Theological Lexicon of the Septuagint (HTLS) is a landmark work by Mohr Seibeck. The editors were Eberhard Bons and, until June 2020, by Jan Joosten.[1] The work began as a research project funded by the Agence Nationale de la Recherche in 2010. This present volume represents the first fruits of their labor. The present volume is the first of a four-volume series that will cover over 600 words and word groups.

The articles all cover six-sections moving from general Greek usage to Christian writings.

The methodology of the HTLS is historical and theological. The lexicon is historical because it follows Greek words and usages in their itinerary through time and to relate diachronic developments in the language to the wider political and cultural issues (XXII). The lexicon is a theological lexicon because many of its head-words participate in theological discourse (XXII). However, the HTLS differs from the previous dictionaries of Muraoka and Lust/ Eynikel/Hauspie by focusing on words that exhibit a specific usage and in setting Septuagint usage in a broad language-historical context. The HTLS differs from theological dictionaries in its restrictions to words that are attested in the Septuagint and bracketing out theological judgements in the lexical analysis.

The prolegomena provides a brief history of Septuagint studies by covering four key areas: Greek background, the workshop of the translator, Reception of the Septuagint’s Vocabulary in biblical and para-biblical writing, and the need for a new research tool, and Methodological Issues in studying the Septuagint. The method of the HTLS is the center piece of this review for its method will determine the success of the remaining three volumes. The criteria by which HTLS selects words or word groups does not exist, but they suggest six methodological suggestions.

The HTLS is a resource that advances the field of Septuagint studies as it builds upon the previous advances in the field. Previously, scholars were bound to isolated studies in each book since the vocabulary is a great obstacle in ascertaining the special religious vocabulary of the Greek Bible. The interpretation of the Greek Bible still depends on a correct understanding of the words it uses. The HTLS does not remove all barriers to the vocabulary to the Septuagint, but it removes a large portion of that barrier. The lexicon serves as a great reference for the Septuagint for future generations, and its list of ancient sources and frequently cited works serves as a launching point for any scholar who wishes to further their Septuagint studies. The layout of the individual entries is clean and organized. In addition, the publisher made the binding and cover with a high quality. My only critique is that I have not heard whether Mohr Siebeck will release a digital version with Logos or Accordance.

The HTLS is a great resource for biblical scholars for both the Old Testament and New Testament. Also, the resource will serve anyone who wishes to study Judaism in antiquity. Moreover, scholars of Greek literature who are willing to look beyond the limits of classical literary canons will find that the HTLS opens up new perspectives in linguistic and philological. Ferdinand Hitzig famously urged, “Sell all you have and buy a Septuagint!” If you desire to study the Septuagint, then I encourage you to do what you must to acquire the Historical Theological Lexicon of the Septuagint. 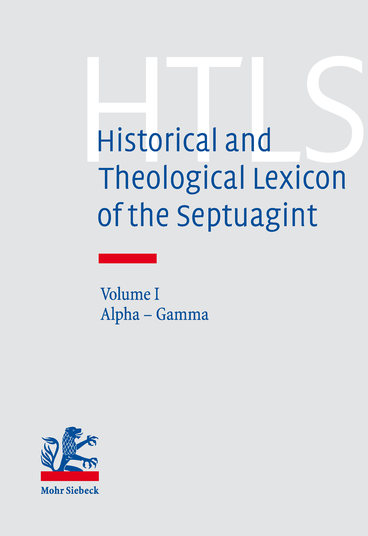