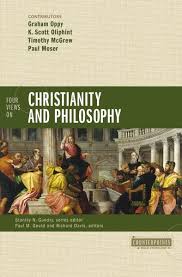 Perhaps reflecting the influence of his colleague, Rudolf Bultmann, Martin Heidegger makes what at first seems a curious statement in a 1927-28 lecture entitled “Phenomenology and Theology”: “there is no such thing as a Christian philosophy” (in The Piety of Thinking, James G. Hart and John C. Maraldo, eds. [Bloomington: Indiana University Press, 1976], 21). For Heidegger, philosophy examines the most basic of human pursuits (the question of Being) while all other disciplines (including theology) examine various aspects of Being. Some in the Society of Christian Philosophers may disagree, but Heidegger is basically correct—if by Christian philosophy one means a philosophy that differs in kind from other alleged types of philosophy.

Philosophy, though, properly understood, is not a set of beliefs or method of analysis that is susceptible to qualifying titles such as “Christian,” or “atheistic,” or Buddhist.” This is not to say that one who is a Christian may not philosophize differently from one who is an atheist, or a Muslim, or a Buddhist. The practitioner changes while the practice does not—or, at least, it should not. The tension evident here is brought into relief by the contributions to Four Views on Christianity and Philosophy, edited by Paul M. Gould, associate professor of philosophy and Christian apologetics at Southwest Baptist Theological Seminary (Fort Worth, TX) and Richard Brian Davis, professor of philosophy at Tyndale University (Toronto, Canada). The following review will highlight elements of each contribution and conclude with a comment about the book’s format.

Each of the four views offers definitions of Christianity and philosophy so that each contributor can agree upon what it is that they discuss. Though this does not always happen, the definitions are reasonably similar for a conversation to commence. Graham Oppy’s view, called the “conflict model,” is presented first and he does an admirable though incomplete job of defining philosophy as a “domain of inquiry” (p. 23). His understanding of Christian faith at first appears too generic to be useful (pp. 21-22), but he adds necessary specificity when he gets to his focused critique showing why there is conflict with philosophy (pp. 32-40). Oppy’s way of defining philosophy neutralizes it from the start; as a domain of inquiry philosophy does not require a presuppositional commitment to a system of belief, but merely a commitment to answering questions for which there are not agreed upon answers using agreed upon methods of inquiry. Such consensus—agreeing upon answers and methods—is something philosophy has never enjoyed and is unlikely ever to enjoy. Thus, Oppy’s definitions are insufficient to establish a conflict; Oppy certainly thinks there is conflict—but it is more apparent than real. The conflict, for Oppy, comes not in his definitions but in his assumption that naturalism is true. He had defined philosophy in such a way that it does not require a presuppositional commitment, but he has such a commitment—to naturalism—which makes his philosophizing antithetical to Christianity (pp. 41-47). So, Oppy shows us not that philosophy and Christianity are at odds, but that naturalistic philosophy and Christianity are at odds. (A similar case is made in the relationship between religion and science by Alvin Plantinga, Where the Conflict Really Lies [Oxford University Press, 2011].)

Scott Oliphint’s view, called the “covenantal model,” is like Oppy’s in that it, too, sees philosophy and Christianity as opponents—but for very different reasons. Oliphint’s Christianity is rather narrowly defined and requires assent to natural and special revelation as foundational for all human endeavors (pp. 72-81). Though this poses few problems for Christians, saying that the foundation for human inquiry rests in revelation poses serious problems for those uncommitted to Christian faith. And this is why Oliphint’s and Oppy’s views are opposite sides of the same coin: Oppy’s presuppositions involve the unquestioned truth of naturalism, whereas Oliphint’s presuppositions entail the unquestioned truth of divine revelation (both natural and special). With such presuppositions in place, there is little wonder why each views philosophy and Christianity as adversaries. Only on the basis of adopting Christian principia (or foundations) can faith and philosophy be something other than conflictory (pp. 87-94). Like Oppy, Oliphint has not shown that philosophy and Christianity are inimical to each other, only that without a precommitment to Christian faith, philosophy is at odds with that faith.

The third option, the “convergence model” presented by Timothy McGrew, helpfully recognizes that philosophy “is not a set of substantive beliefs . . . it is a discipline” (p. 124). With this more neutral understanding of philosophy, McGrew argues that philosophy confirms Christian faith. McGrew qualifies this neutrality suggesting that some presuppositions are necessary, such as the laws of logic (p. 125) and natural theology (pp. 128-30). McGrew’s method may be called a two-step approach. With certain non-theological precommitments in place (i.e., the laws of logic) one is able to present “evidence” for God’s existence through arguments or proofs such as the Kalam cosmological argument (pp. 131-34). This first step demonstrates the plausibility of generic theism. Only with a second step—the presentation of scriptural data—can one draw a sharper image of Christian faith (pp. 141-50). Since McGrew begins with a neutral dialogical space, his convergence model can be only persuasive, not compelling (p. 150). His model fits well with what is called classical apologetics.

In the final option, the “conformation model,” Paul Moser recognizes the superiority of Christian faith (like Oliphint’s covenantal approach) and claims that philosophy conforms to that faith. Because God’s wisdom is prior to and superior, all other forms of human wisdom must (eventually) conform to divine wisdom (pp. 177-78). Moser defines philosophy closely to its etymological form (i.e., “love of wisdom”); though he sees elements of praxis, he views philosophy chiefly in terms of content (pp. 178-80). The content of philosophy serves Christian faith through a “kingdom-enhancement requirement” (p. 196). This requirement helps avoid undue speculative pursuits that do not promote Christ’s wisdom. Given these features of Moser’s view, philosophy—as traditionally understood—is not separable from Christian theology at all, but is simply another means of advancing divine wisdom for the sake of the kingdom.

The format of the book is excellent. After each view is presented the other three interlocutors are provided space to respond followed by a rejoinder. It is this dialogical feature that is so helpful. Indeed, one learns as much—or more—from the back-and-forth responses and rejoinders as one does from the original expositions. And this feature also accents what is becoming a standard philosophical observation: that all philosophy is hermeneutical, perspectival, and its future must be dialogical if its significance is to survive. As long as there is dialog, there is philosophy, and thus philosophy is not merely a domain of inquiry (Oppy) but a province of discursive negotiation. As such, philosophy is hardly antagonistic to Christian faith but is a welcome dialog partner in the human—that is, common—quest for truth and understanding.