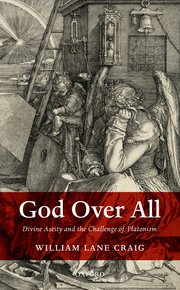 God Over All is an expansion of William Lane Craig’s 2015 Cadbury lectures. A more in depth volume on God and abstract objects is forthcoming with Springer Publishing. This work then can be considered as a succinct summary of Craig’s research on the topic. Given that this is the case, we should judge this work in light of the aforementioned context.

Craig begins the volume by defining the problem of God and abstract objects. The idea is something like this: Classical theism sees God as a se, that is, God does not exist through another or from another; instead it is he who is responsible for all of reality (p. 1). And yet, if Platonism – the thesis that there are abstract objects which are eternal and immaterial – is true, God would not be a se. Craig gives the following as an example of why this would be the case:

Consider the cluster of divine attributes which go to make up God’s nature. Call that nature deity. On Platonism, deity is an abstract object existing independently of God, to which God stands in the relation of exemplification or instantiation. Moreover, it is in virtue of standing in relation to this object that God is divine. He is God because He exemplifies deity. Thus, on Platonism, God does not really exist a se at all. For God depends upon this abstract object for His existence (p. 43).

The first part of Craig’s work is a biblical and a historical defense of the traditional Christian view that God is a se. In reference to the biblical defense, some of the texts which Craig thinks are incompatible with Platonism include John 1, Colossians 1:15-16, and Romans 11:36 (pp. 22-27). As it pertains to church history, Craig references Harry Austryn Wolfson in pointing out that the Church Fathers affirmed the following three points which are all incompatible with Platonism: (1) God alone is uncreated, (2) nothing is co-eternal with God, and (3) eternality implies deity (p. 34).

Given that classic Platonism is not compatible with Christian belief and given that, according to Craig, Absolute Creationism and Divine Conceptualism have major issues, in order to undermine the Indispensability Argument, Craig encourages his reader to look more seriously at anti-realist views. The views that are engaged include fictionalism (abstract objects are merely useful fictions) and figuralism (abstract objects exist but only in a figurative sense), and neutralism (first-order logic is not ontologically committing). After Craig attempts to make plausible such views from objections, Craig thinks that he has established several alternatives to Platonism that Christians can utilize in response to the problem of God and abstract objects. Craig himself does not advocate for just one of these anti-realist views but is convinced that a combinational approach is most plausible (p. 207).

But is Craig right? Moreover, should Craig’s work be seen as adding something unique to the literature on God and abstract objects? While the reader will have to make up her own mind as it pertains to the former of these questions, I think the answer to the second question is yes. However, it is not obvious to what extent it contributes to the literature. While Craig’s biblical and historical analysis is extremely helpful, his work has some weaknesses. For example, in his chapters on anti-realist approaches to abstract objects, his engagement with objections to such anti-realist views is often very brief. This is unfortunate because, as one can see in Gould’s volume, there is indeed a lot the realist can say in response to Craig’s arguments. This is not to say that Craig has not offered short and successful arguments for his position, but there is much more to be said.

On a similar note, outside of the Indispensability Argument, Craig does not pay attention to other arguments for realism. As Gould and Davis make clear, there are other reasons for considering realism (Paul Gould’s Beyond the Control of God?: Six Views on the Problem of God and Abstract Objects [New York: Bloomsbury Press, 2004], 129-130). In fact, it is not even clear from reading Gould and Davis that they think that the Indispensability Argument is the best argument for realism. These issues, however, do not seem very damaging if one remembers that this work is only a condensed work of a more robust work that is forthcoming. If one reads this book as something more like an extended primer or an introductory defense of anti-realism, then it is clear that this book makes an important contribution. I am confident that evangelicals who are unfamiliar with this debate or who have never seriously considered anti-realism, will be deeply challenged by Craig’s arguments and will see anti-realism as a serious and plausible option.