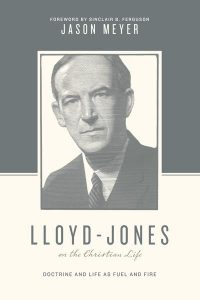 Dr. Jason Meyer is the Pastor for Preaching and Vision at Bethlehem Baptist Church in Minneapolis, Minnesota. He also serves as Associate Professor of New Testament at Bethlehem College and Seminary. He has made contributions to the ESV Expository Commentary series and is the author of Preaching: A Biblical Theology. The work being considered in this review is his theological biography on Dr. Martyn Lloyd-Jones entitled, Lloyd-Jones on the Christian Life: Doctrine and Life as Fuel and Fire.

Dr. Martyn Lloyd-Jones was a massively influential preacher in the twentieth century, and it will be shown that some contend that Lloyd-Jones’ influence is greater today than it was in his own day. Remarkably, the ministry of Lloyd-Jones was a preaching and teaching ministry that did not include writing. The works that are in print are transcribed lectures and sermons. To write this theological biography of Dr. Martyn Lloyd-Jones, Jason Meyer was challenged with the task of reviewing the sermons and lectures of Lloyd-Jones in order to succinctly and accurately present the Doctor’s theology.

Lloyd-Jones’ conviction is made clear: there must not be a divorce between doctrine and life. He said, “There is nothing which I know of which is more unscriptural, and which is more dangerous to the soul, than to divide doctrine from life” (p. 25). He believed that, “right doctrine is the prerequisite for right living” and that, “our conduct heralds the content of our doctrine” (p. 25). The preaching of Lloyd-Jones remained faithful to herald biblical doctrines even in the midst of an increasingly secularized church that was falling prey to ecumenicalism and liberalism.

In Part 2, “The Doctor’s Doctrine”, Meyer’s work of summarizing and concisely defining Lloyd-Jones’ doctrinal positions is highly commendable. There are at least three grand takeaways for the reader. First, the Doctor viewed Scripture as the ultimate authority. Second, he was unabashed in his reverence for the glory of the Sovereign God. Third, Lloyd-Jones was surgically precise in his theological positions.

The surgical precision of the Doctor in his theology is manifest in each doctrinal section. The reader will find that they are challenged constantly to reread the paragraphs, not because the language is confusing, but because Lloyd-Jones’ theological distinctions are uniquely refined. If the reader gives this work a thorough examination, they will not only learn about Martyn Lloyd-Jones, they will be taught, challenged, and very likely deepened in understanding.

Lloyd-Jones had an unapologetically high view of Scripture as authoritative and absolute. He was also unmistakably reverent and worshipful in his view of God. In each chapter, Meyer puts forward a presentation of the Doctor’s doctrine followed by specific practical results that must follow true belief in those doctrines. This formatting is helpful to see the relation between doctrine and the Christian life. Again, for Lloyd-Jones right thinking always precedes right living, and right living is the necessary, expected, and right outcome of true belief.

It is clearly seen that Meyer made a tremendous effort to understand and present the doctrinal positions of Lloyd-Jones. In fact, this book in large part serves as a synopsis of the content of the lecture and preaching ministry of the Doctor. This does not detract from the book, as it serves to reinforce the premise that one cannot understand Lloyd-Jones without understanding that the doctrine he taught was the doctrine he believed and lived by.

Lloyd-Jones’ teaching was always doctrine before application. Meyer organized this book to mirror Lloyd-Jones’ methodology. Having presented the Doctor’s theology in Parts 1 and 2, Meyer moves on in Part 3 to the presentation of Lloyd-Jones’ counsel on practical matters such as the Christian disciplines of Scripture reading, prayer, and the application of doctrine through love, the home, and work. He also deals with issues such as depression and death.

In Part 3, Meyer showed that Lloyd-Jones affirmed that Scripture was inspired by the Holy Spirit and written by the hands of men. Also, he affirmed that the Holy Spirit superintended the writing in such a way as to keep the human authors from error while at the same time maintaining the conveyance of their humanity and personality in the writing (p. 127). In helpful manner, Meyer points out three causes of difficulty the believer faces in reading the Bible. He discusses at length the Doctor’s diagnosis of 1) The Devil’s attacks, 2) Personal challenges, and 3) Interpretive Challenges. To remedy these challenges, Lloyd-Jones counsels the believer to read the Bible prayerfully, seeking the illumination of the Holy Spirit and a submissive heart for the reader. Secondly, the believer must read the Bible with care, seriousness, and systematically. Thirdly, the believer must spend time receiving the Bible in the context of the Church through preaching.

Just as submission to the Word of God is recognition of God’s glory and authority over all, so prayer is submission to the greatness of God. Meyer was careful to maintain brevity in his presentation of Lloyd-Jones’ teaching on prayer. He writes, “Unpacking all the various ways that doctrine impacts prayer would fill up many books. We have space here for only five brief examples” (p. 140). This approach demonstrates one of the strengths of Meyer’s account, as it serves as a primer for the reader to move on to thorough and deep study of Lloyd-Jones’ recordings and teachings. Meyer did not seek to record all of the Doctor’s teaching in this single volume, but rather to present a concise summary of the major tenets and approach to doctrine and living.

Finally, in Part 4, Meyer provides an ample amount of quotes from contemporaries of Dr. Martin Lloyd-Jones as well as those who encountered his works at a later time. He compiled these quotations and comments in order to demonstrate the tremendous impact Lloyd-Jones made in this world through his preaching and teaching. It is notable that the evidence reveals that Lloyd-Jones’ impact is greater in modern times than it was in his own day.

Lloyd-Jones’ life in ministry was not without controversy. Regarding the Doctor’s legacy, Meyer honestly evaluates Lloyd-Jones’ views on the baptism of the Holy Spirit, which he concludes that it appears Lloyd-Jones was in fact reading his experience into certain texts of Scripture rather than deriving his doctrine from the text. He also provides a succinct description of the involvement of Lloyd-Jones in the Secession Controversy. Meyer’s evenhanded approach is helpful and should be appreciated.

In conclusion, this book is a useful primer to the theology of Dr. Martyn Lloyd-Jones. Jason Meyer is succinct in his writing and yet altogether thorough at the same time. His commitment to honestly represent the teaching of Lloyd-Jones can be seen in vast amount block and short quotations of the Doctor himself. As Lloyd-Jones is such a towering figure in evangelicalism, and a spearhead of sorts for expository preaching, this book will serve Christians well. 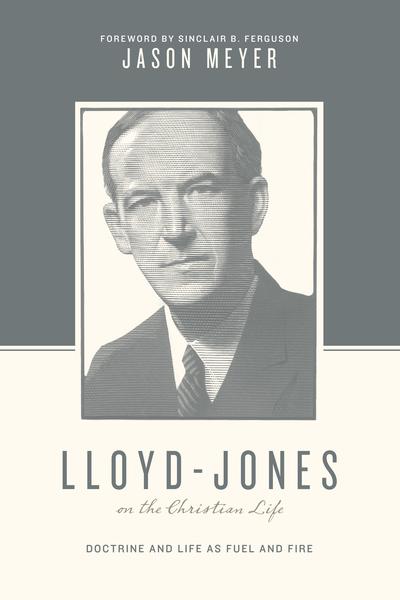