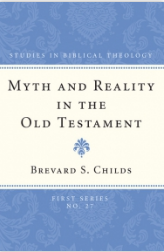 What is the nature and meaning of “myth” in the Old Testament? In Child’s work, Myth and Reality, it is this very question, which remained unanswered by Gunkel and others, that he sought to address. Childs’ thesis is simply, “that myth and the Old Testament have as their ultimate concern an understanding of reality” (p. 7). He notes the tension between the understandings of myth and reality and how reconciliation is found in the “redemptive activity of God.” What qualifies Childs to answer such a phenomenological question? Beyond the fact that he served as the Sterling Professor of Yale Divinity School, he was also the author of numerous works that dealt with the problems of historical-critical methodology. Some of his more prevalent works Biblical Theology in Crisis, Old Testament Theology in a Canonical Context, and his Biblical Theology of the Old and New Testaments displayed his rigor and expertise to engage the issue of myth with a careful eye.

In five chapters this little monograph works to frame and engage with the problem of defining myth and delimiting the theological implications of myth in Old Testament exegesis. Chapter one deals with the descriptive approaches to defining myth and their problems: (1) too broad (p. 15), and (2) it does not deal with the witness of faith (p. 16). Childs seeks to frame a phenomenological definition of myth (p. 16). Chapter two surveys this structural and philosophical development of myth in the witness of Old Testament and ancient Near Eastern reality. The formation of myth is the continual pull to bring the past into the present (p. 23) through tradition and memory. In Chapter three, Childs deals with the tension of the Old Testament text to reconcile its worldview with the surrounding cultures (p. 31ff). Childs demonstrates this tension by examining select text in Genesis (pp. 31-58), Exodus (pp. 59-64), and Isaiah (pp. 65-72) and the etiological motifs that function within the texts (p. 60). That is to say, much of the Old Testament text has an issue with the historicity of myth as it relates to the biblical concept of reality (p. 73).

Chapter four picks up the discussion of myth with an analysis of the Old Testament’s categorical understanding of reality. Childs notes that the problem here is not chronology (linear) but rather one of quality (p. 76). He gives three stages to the developments of the biblical understanding of this category: (1) non-being/chaos, (2) creation by God, and (3) man’s disobedience (p. 83). Another category that is distinct is, space, which is to be understood in terms of an eschatological new creation, “God’s new space entering into the world of ‘old space’” (p. 94). The final chapter examines the theological problem of myth. While scholars, like Gunkel, provided insights into the formal analysis of myth in the Old Testament, little is said of the theological problem (p. 97). Looking from within the canonical-text, Childs’ conclusion is that the theological problem deals with the experiences of Israel in the process of being made new (p. 98). All theological approaches must be grounded in the objective reality of Israel’s experience and history (p. 103). In the New Testament, this can be examined through the encounter with Jesus as he sought to make them new through faith (p. 106).

This work surveys a wide range of thought within a small apparatus. The low page count is not indicative of its theological weight, for it deals with some prolegomena that encapsulate both methodology and historiography. The structure and flow of the text are helpful to the reader as it frames the problems surrounding this issue and moves into formal and functional analysis of some selected text. Any reader familiar with Childs will excuse his ponderous writing pattern in light of the insight that is gleaned from the work.

Child’s examination of  Gen 1:1-2, 3:1-5, 6:1-4; Ex 4:24-26; Is 11:6-9; and 14:12-21 proffers to the reader the biblical function and nature of myth as the authors of the Bible altered  these patterns from the Near Eastern context. He notes how these passages are contrasted to the mystical understandings of time and space. More to this, Childs notes that these patterns are altered to posit a new reality (p. 77) and how there is no room for myth in the New Israel founded by Jesus Christ. While Childs’ methodology is warranted and consistent in the examination of the biblical text, some further comments on their function, guised as etiologies, are needed. The mention of etiology, while examining Ex4:24-26, is warranted within the discussion of this issue. However, some further substance would further solidify his argument. Etiological motifs, during the time of this monograph, were not without their broad definitions. This is not to chide Childs’ remarks about etiological motifs, but it seems odd that he does not clarify what this means and the methodology behind in it in a study concerned with phenomenological and historical issues.

Another area of concern in this work is Child’s treatment of biblical time. He criticizes Cullmann’s view of “spatial” time and notes how others scholars (mostly Pedersen and Orelli) remark on the distinctiveness of the Hebraic concepts of time (pp. 75-76). Because Hebrew, according to Childs, emphasizes qualities of action over tenses the conceptualize of a linear time is a “modern abstraction” (p. 77). Beyond vocabulary, what other criteria might help the reader understand his thought process here? His biblical analysis relies heavily on the prophets and the eschatological focus of time, but does mean their view is normative of all biblical genres? The use of the term “reality” seems to impose a modern notion of historiography onto the biblical text.

Childs concludes his monograph by stating that Israel “succeeded in overcoming myth” (p. 97). The Old Testament is void of meaning without an understanding of the New Testament––where the Jew receives a proper understanding of the OT through Christ (p. 98). This is a strong statement; perhaps he means incomplete instead of meaningless? In essence, it seems that Childs’ desire is to base the categories of time in space in the historicity of their reflection recorded in Scripture. Despite some minor ambiguity in the work, Childs’ buttress for a historical Israel and New Israel contributes heavily to the work of biblical theology, especially in an evangelical framework. This puts him at odds with his contemporaries and even mainline scholarship in postmodernity. This work serves as a memorial for modern evangelical scholarship. It both proffers rigorous engagement with central issues concern Old Testament methodology and how to faithfully, responsibility, and constructively navigate issues of the biblical text as they arise in culture.

In summation, Childs provides a significant monograph dealing with the central issue of a phenomenological understanding of the biblical witness of myth and reality. In time that is historically negative towards the historicity of Israel, Childs defends a fundamental component for doing biblical theology–belief in the inspiration of the text. Although this examination does not give an exhaustive account of myth and reality, it does provide a remarkable critique of relevant literature and methods.