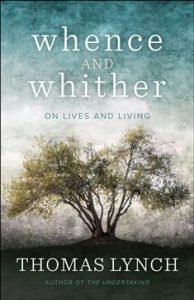 Thomas Lynch is a funeral director, critically acclaimed poet, essayist, and the author of five collections of poems and four books of essays. His notable work titled, The Undertaking: Life Studies from the Dismal Trade (1997), won the Heartland Prize for non-fiction, the American Book Award, and was a finalist for the National Book Award. Widely considered one of the most skilled writers and thinkers on death and the meaning of living, Lynch’s work has appeared in several internationally influential publications, including the New Yorker, Harper’s, The New York Times, and the Paris Review, among others. Lynch is also a frequent guest poetry reader, keynote speaker on the topics of the last things, the life of faith, and medical ethics, in venues all over the English-speaking world, as well as a guest lecturer in universities, churches, institutes, and libraries.

In the preface to Whence and Whither, Lynch presents the overall premise of the book, which also stands as the common human predicament—“every human whoever was or is or will be will wrestle with these mysteries: the beauty of our being and the desolation of our ceasing to be” (p. xi). According to Lynch, humans are the only creatures plagued by questions about the religious and existential mysteries, namely: “How did we come to be? Where are we bound when we die? Does the abyss on either edge of our linear history include us being in it? What does it all mean?” (p. xi). The collection of writings in this book turns out to be Lynch’s humble attempt to wrestle with these mysteries and make sense of the senseless human quandary—we live, we die, and then what?

The book is comprised of sixteen chapters, each of which contributes to Lynch’s wistful “wrestling match” with the mysterious “whence and whither” questions of the human experience. In this collection of material from lectures, essays, poems, personal and impersonal stories, and a play, Lynch demonstrates his exceptional ability to reflectively and evocatively ponder the meaning of life, death, and what comes next in ways that are never depressing, occasionally amusing, always thoughtful, and absolutely inspiring.

Each chapter serves as a stand-alone contribution to the whole book. For this reason, I will highlight two chapters that caught my attention. First, in the somewhat startlingly titled chapter, “Some Thoughts on Uteri and Womb,” Lynch contemplates the awe and wonder of the womb, which he describes as the first frontier of our humanness, the “seedbed and safe harbor whence we launch, first home and habitat, the garden of delight’s denouement” (p. 61). Lynch further elaborates on the female reproductive parts and uses empowering language to articulate that women are not the “weaker sex,” but rather, females seem to be the fiercest, the ones without which nothing happens (p. 63). All of this leads Lynch to describe the “animal sobs” of a bent over mother, graveside for her toddling boy’s burial, as she wraps her small arms around her midsection, feeling the grief most intensely in her most hidden places, the seedbed of her uterus, “vacated with pushing and with pain, and vanquished by her child’s death” (p. 66). Second, in “The Good Funeral and the Empty Tomb,” Lynch expounds on a theme that is woven into the entire work: the living going the distance with the dead. Lynch explains that what separates humans from all other creatures is that since we are the species that contemplate the existential mysteries of being and ceasing to be, our humanity is directly linked to how we respond to mortality. In short, Lynch suggests that “how we deal with our dead in their physical reality and how we deal with death as an existential reality define and describe us” (p. 134). Building on this, Lynch critiques the North American cultural trend of bodiless obsequies (memorial services and “celebrations of life”) as being renunciations of an essential undertaking and fundamental humanity (p. 137). In contrast, he argues that a good funeral, one equipped with four essential and definitive elements—the corpse, the caring survivors, a narrative that settles peace between the two, and the disposing of the dead—is the best response to the signature human concern of what to do about a dead human, and the best way for the living to go the distance with the dead (pp. 136-138). Lynch continues his critique and suggests that perhaps if the dead were more welcomed in church, maybe the living would return (p. 142).

The reader will celebrate Lynch’s openness to discuss his life as a state of flux, namely living in the tensions between community and marginalization, orthodoxy and apostasy, authority and autonomy, belonging and disbelief (p. 152). Applause is also warranted for the creative approach to presenting his reflections on the whence and whither questions. The innovative combination of literary genres (i.e. poems, essays, a play, etc.) makes this work accessible and engaging to a range of multifarious readers. However, this strength could also become a weakness. At times the material is difficult to follow, specifically when thoughts and themes cannot be traced easily, even within the same chapter. In addition, unfavorable criticism will come from Lynch’s overtly pessimistic comments toward the church, but particularly the Roman Catholic church. Although Lynch does demonstrate a level of ecumenical sympathy in his praise of heroic, reverend clergy of multiple denominations, it is difficult to find one positive comment about the Catholic church, the tradition that has shaped his faith, both for the good and the bad.

For potential readers, namely students of biblical studies, a note of caution is necessary: this book offers no formal or exegetical treatment of the biblical text pertaining to death and afterlife. At times Lynch refers to the Bible and makes connections between Scripture and the topic of his discussion, but he states clearly that exegesis is beyond his expertise. If one is hoping for a biblical perspective on life and living, then this book is sure to disappoint. For the student of theological studies, however, there is much to be gathered from these reflections. Lynch challenges the existence of God, discusses openly the reality of living in the tension between faith and doubt, and compels the reader to reevaluate the intersection between his or her views of individual eschatology and theological anthropology. And ultimately, the theologian is confronted with the implications that emerge from the reappraisal.

This thought-provoking book introduces readers to the complexity of human reflection on the existential questions of human existence. Reading this book will naturally elicit an internal “wrestling match” that grapples with question: “How did I come to be the one I am?” 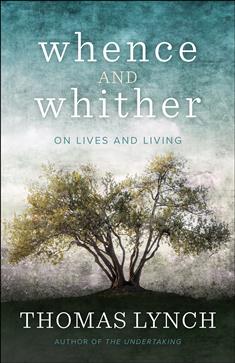