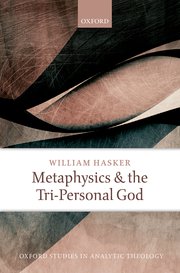 In this impressive study William Hasker, the Distinguished Professor of Philosophy at Huntington University, takes on the task of analysing the trinitarian three-in-one problem. That is, how we should understand the theological statement that “God is three persons in one being.”

Hasker seeks to establish, first, the foundations of the doctrine of the Trinity and, second, articulate and defend social trinitarianism (ST). Previous philosophical interactions with central Christian doctrines have often been accused of lacking historical and contextual awareness. It is Hasker’s goal to show that this picture is mistaken, and to demonstrate how the emerging field of analytic theology is not only philosophically rigorous, but that it carefully considers the witness of Scripture and the importance of Church history.

The book is structured into three sections. The first section outlines the presuppositions for Hasker’s analytical endeavour. As Hasker remarks, it is difficult to attribute the label “social trinitarianism” to any ancient thinker, given that the ontological model for ST grew out of modern categories – especially with regards to philosophy, psychology, and sociology (p. 24). Nevertheless, Hasker—equipped with Plantinga’s definition of Persons as “distinct centers of knowledge, will, love, and action” (p. 22)—sets out to locate pro-ST themes in historical thinkers, such as Gregory of Nyssa and Augustine. Notable thinkers, including Richard Cross, have rejected a pro-social reading of Nyssa. Hasker, however, argues that Cross’ misguided rejection of ST is based on a narrow understanding of divine simplicity (p. 39). Indeed, Hasker rejects the stronger notion of divine simplicity (p. 60). Similarly, some scholars have ruled out a pro-social reading of Augustine due to his usage of psychological analogies. Hasker contends, however, that the later developments in Augustine’s De Trinitate, which portrays a dramatic interaction between the Father, Son, and Holy Spirits, seems to lend itself to a social understanding of the Trinity: three Persons sharing one nature.

What is this nature which binds the Trinity together? Here Hasker introduces the metaphysical notion of a trope. A trope is an instance of a property, and such property-instances have causal consequences. Applied on the Trinity, we might say that a trope of the divine essence is the divine essence instantiated in a divine being (p. 52). This is a complicated definition, which I will later return to in this review.

In section two, Hasker evaluates recent and contemporary explorations of the Trinity. Beginning with theological models of the Trinity, he evaluates the proposals of Barth/Rahner (ch. 12) and Moltmann/Zizioulas (ch. 13). Hasker argues (rather connivingly) from these modern Trinitarian models to his own ST model by suggesting that the most reasonable way to understand the fellowship within the Trinity and communion between the members of the divine nature is to say that there is a fellowship between persons, which is the core claim of ST.

The remaining chapters of this section (ch. 14-19) discuss several philosophical evaluations of the Trinity by Brian Leftow, Peter van Inwagen, Michael Rea, Jeffrey Brouwer, William Lane Craig, Richard Swinburne, and Keith Yandell. Hasker engages critically with these proposals and suggests that they either fail to adhere to Orthodox Christianity (Craig), fall short of monotheism (Yandell), or that they entail a problematic tri-theism (Swinburne).

The third and final section is devoted to Hasker’s own proposal, and particularly the metaphysical notion of tropes and the role it plays in a robust philosophy of the Trinity. As Hasker says, the “three persons share a single concrete nature, a single instance or trope of deity” (p. 226). This leads Hasker to propose that the divine essence (trope) supports the ontological persistence of three distinct lives. How should we, then, understand the concept of “support” with regard to the three distinct lives of the Trinity? Hasker suggests, drawing on the metaphysical landscape of constitution, not that each Person is identical with the divine nature, but that each Person is constituted by the nature. A classic example of the relationship of constitution is a statue. A statue is constituted by a lump of clay, but the form of the statue is not identical with the material basis of the statue. This is because, the form of the statue can change (it can be destroyed or formed into something else) while still being the same lump of clay. Hence, we have constitution without identity.

It is at this point, however, that the philosophical and theological problems of Hasker’s Trinitarian proposal emerge. I want to suggest that the metaphysics of constitution significantly challenges the reality and distinctiveness of the three Persons of the Trinity. The metaphysics of constitution – as formulated by Lynn Rudder Baker – is an attempt to safeguard a generally materialistic ontology from the charge that it collapses into reductionism (or identitism). Frequently applied on the mind-body problem, the constitutionist says that the mind is constituted by (ontologically supported by) the physical (the brain structure) without being reducible to purely physical stuff or neurochemical interactions. However, many critics of this view suggest that this metaphysical theory encounters significant problems regarding the causal efficacy of the mental. This is because, either everything is causally determined by the physical structure, which renders the causal contributions of the mental epiphenomenal. Or, the mental produces something ontologically above and beyond the physical, but then the relationship of dependency is broken between the mental and the physical; and this would invite dualism. Hence, the constitution view is intrinsically unstable.

Hasker’s Social Trinitarianism seems to encounter a similar challenge. If a Person of the Trinity is truly dependent on the divine essence (the trope) then the causal efficacy of that Person is in jeopardy, because whatever the Person produces is already contained at the base level; in this case it is located within the trope. Conversely, if a member of the Trinity produces something which is not contained within the trope, then the relationship of dependency is broken. The constitution view is therefore undermined. This could in worst case scenario invite tri-theism. Indeed, given that Hasker clearly rejects the unification of the will between the three Persons of the Trinity (no “single act of willing”, p. 205), a tritheistic entailment is made probable. Therefore, in order to avoid these conclusions Hasker needs to clarify his usage of trope, and how it relates to and can uphold the causal efficacy and distinctiveness of the members of the Trinity.

William Hasker has delivered an excellent defence of social trinitarianism. This is a well-argued and thoughtful book that will be of interest to those working at the interdisciplinary arena between philosophy and theology, primarily at a postgraduate and research level.