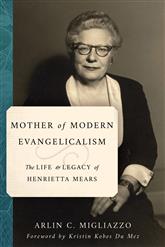 A “human dynamo” for the Lord is how the Christian Century described her in 1950 (p. 253). Recounting the most successful church in the Southwest of the time, First Presbyterian of Hollywood, the Century’s reporter spent about as much time detailing the senior pastor, as it did enchanted by a 60 year-old, bespectacled, matronly-appearing single woman who headed its renowned Christian education program and had the L.A. youth hooked on Christianity: Henrietta Mears. In this first scholarly biography of Mears (1890-1963), we get to see clearly why. Through a rich and vivid chronicle of Mears’s life, Migliazzo, Emeritus Professor of History at Whitworth University in Washington State, offers us deep insight into her personality and an enriched understanding of her multifaceted public ministry. The book deftly and sensitively portrays this remarkable–and previously underappreciated–“architect” (p. 263) at the heart of American Evangelicalism’s transformative mid-century moment. If sobriquets are any index of influence, Migliazzo shows us how, from the 1920s to the 1950s, Mears was, quite simply, Evangelical America’s “Teacher.”

The book’s journey begins with a thoughtful survey of Mears’s upbringing: from her birth in Fargo, SD, to her family’s travels across the upper midwest, to her formation at fundamentalist headquarters First Baptist in Minneapolis, MN, pastored by the legendary William Bell Riley. Especially influenced in her spiritual life by her mother, Mears found her “solace and stability” in the bedrock Christian message and her church community (p. 29). Her intellectual talents carried to the University of Minnesota, where she majored in chemistry and defined a lifelong positive and creative “relationship between Christian faith and the world’s wisdom” (p. 35). Inspired by the evangelistic radio of Paul Rader and the Keswick deeper Christian life spirituality, Mears still strove to conform her life to the maxim, “If He is not Lord of all, He is not Lord at all” (p. 264). Discovering her true calling as an educator, she launched a career as a public school teacher. A pedagogical innovator and popular mentor, she saw holistic learning as the “dynamic development of the conduct and character of the pupil” (p. 37) and demonstrated special talent for coalescing vibrant communal cultures and motivating notable generosity (p. 49). As she grew in renown for administrative acumen, pedagogical ingenuity, and cultural savvy, Mears was recruited to become Director of Christian Education at the massive First Presbyterian in California, where she moved in 1928.

From here, Migliazzo’s biography turns thematic, cataloguing the striking success, multiple elements, and dense networks of influence radiating out from that role. Initially, she vivified the Sunday School, which boomed in zeal and attendance (pp. 280-82). From there, she developed a compelling Christian educational program for all ages, but especially college students. Her program amalgamated a confident exposition of the Bible; a highly relational approach to ministry; an exacting work ethic for Christian leadership and training; elaborate programming; and a “winsome” engagement with the intellectual and cultural questions of the day (pp. 86, 8). Overflowing from stunning success in the local congregation, Mears pioneered wider ministries: Gospel Light Publications distributed Christian educational curricula and resources to a voracious readership around the world (pp. 122-28). Forest Home Retreat Center served as an epicenter for faith-based conferences. All the while, she penned books on spirituality and captivated vast audiences with lectures on how to reach young people with the gospel message. Her classic orientation to the grand scope of the scriptures, What the Bible is All About (1953), sold an estimated 2 million copies by the 1960s in multiple printings.

The crucial argument of Migliazzo’s book is that Mears should be considered at the center of the “evangelical reconfiguration” (p. 10) of mid-century, due to her role in forging extensive coalitions and her ethos in merging an ardently orthodox Christianity with an ecumenical cultural openness. If we see this era’s Evangelicalism as characterized by its delicate balance of a traditional Christian message, call to personal transformation, and its renewed missional impulse to cross boundaries and address new contexts, then surely this major claim is correct. Even when relatively more diffuse, Mears’s wider circle of influence was an astonishing omnibus of crucial, influential Evangelical figures and institutions, demonstrating the seductive pull of elite power in this phase of Evangelical outreach. Mears formatively influenced those from Billy Graham to Campus Crusade for Christ’s Bill Bright to Young Life’s Jim Rayburn to The Navigators’ Dawson Trotman to “Mears’s boys” around the country who became pastors, parachurch ministry leaders, and U. S. Capitol Chaplains. Adding to Migliazzo’s explicit list, she would even be responsible for hiring one of the pastors who helped launch the Jesus People movement.

The book brims with vivid detail and lavish primary textual sources, drawing from an impressive array of archival sources and print publications. Migliazzo has an astute eye for the earthy, granular, and gritty realism of social history: this is a book delightfully chock-full of spitwads, class pennants, chemistry lab explosions, and Bible flannelgraphs. At the same time, he shows an admirable humility in the limitations and parameters of historical epistemology, and what can and can’t be honestly extracted from primary source material. This all leads to a book highly attentive to the idiosyncrasies of its figure and careful about fitting her into any hasty generalizations or tidy narratives. That said, the book can be read as making substantial contributions to two of the more recent, prominent trends in Evangelical historiography: the gender and business paradigms, respectively, even while it challenges the reductionist temptations of both that can flatten Evangelical religious culture to one dimension.

The book overflows from a cascade of impressive studies on Evangelical women: first with the pioneering work of Nancy Hardesty, then into Margaret Bendroth’s Fundamentalism and Gender, Marie Griffith’s God’s Daughters; Julie Ingersoll’s Evangelical Christian Women, Emily Johnson’s This is Our Message, and Kate Bowler’s The Preacher’s Wife. And it is situated within a splendid roll call of biographies that enlarge and enrich the genre, for example, Edith Blumhofer on Aimee Semple MacPherson, Jennifer Miskov on Carried Judd Montgomery, Catherine Brekus on Sarah Osborn, and Amy Collier Artman on Kathryn Kuhlman. These all detail strong Evangelical women who pushed the boundaries of spiritual power, influence, and leadership, even while precariously navigating and deftly negotiating traditional gender roles, restrictions, and expectations. As Migliazzo concludes, “For a theologically conservative female to exert such power seems to fly in the face of conventional wisdom regarding the role of women in the twentieth-century church” (p. 272).

Mears herself exercised immense amounts of power and influence in Evangelical networks, even while adhering to a complementarian, conservative theology about men’s preaching and ordination and while restricting the presidency of her college ministry to men. Migliazzo’s book can be read beneficially in tandem with another of this year’s key Evangelical histories: Kristin Kobes du Mez’s excruciatingly necessary Jesus and John Wayne.  While du Mez’s analysis is essential, it will also be important going forward to note that an exclusive focus on aggressive and destructive masculinity does not exhaust the Evangelical gender story or give a full account of the historical record.

So, Migliazzo’s book exhibits a plethora of merits. There could be some quibbles, nevertheless. Seemingly confining the critical edges to a single chapter of “paradoxes and limitations” towards the end (pp. 221-51) had the downside of giving large swaths of the early parts of the book an impression of potential imbalance. That material could have been beneficially interspersed throughout the narrative. In the chapter, Migliazzo does detail Mears’s human edges of character, habit, and circumstance. But some of these appear meager assessments by that point in the text. The account of race, in particular, is strikingly underwhelming. While, yes, Migliazzo does briefly detail Mears’s problematic views on the subject (pp. 243-47), overall this was analytically anemic. More contextualization could have situated this in the crucial role that racial dynamics have played in Evangelicalism’s relationship to American culture.

At a number of points, Migliazzo tries to sympathize with Mears’s oversights on social issues as pragmatic and lauds her refusal to “politicize the gospel” (p. 264). There is both an aspect of hermeneutical holism to that approach and an encouraging contrast to the emergence of the Religious Right’s combatively political gospel. At the same time, there is an interpretive neglect here of the politics of becoming political and the politics involved in political avoidance. Lastly, Migliazzo might have given more attention to Mears’s singleness. There is a flash of commentary on it (p. 41), but given the primacy of marriage and family values in Evangelical circles, the importance of the single vocation has often been diminished.  Mears exemplifies a vibrant single life dedicated to Christian life and ministry, while many singles have struggled with an awkward status and enigmatic roles given them by the church.

On the whole, still, this is a superb and captivating biography of a crucial figure in the history of American Evangelicalism. It will be essential reading for all students of American church history and religious culture, as well as anyone interested in what a vibrant and influential Christian ministry looked like in the mid-century context.

Postdoctoral Research Associate at the University of Virginia