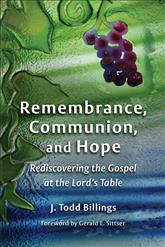 J. Todd Billings is the Gordon H. Girod Research Professor of Reformed Theology at Western Theological Seminary in Holland, Michigan, USA. He has written extensively on systematic and historical theology in the Reformed tradition. In addition to his academic work, Billings is an ordained minister in the Reformed Church in America. The balance of academic rigor and pastoral sensitivity that is part of Billings’ own persona permeates his theological approach to the Lord’s Supper in this text.

This book is a theology of the Eucharist in the Reformed tradition. Billings unabashedly theologizes from within a broad Reformed mode that takes seriously—and with relative authority—the confessional tradition of this theological and ecclesial family. Billings begins, however, with surfacing the need for a book of this nature in the contemporary Protestant scene. He helpfully diagnoses the functional theologies that often undergird the Sunday morning experience in North American churches today. In many churches, a conjunction of an overly individualistic and judicial understanding of the gospel and an overly cognitive engagement with the Eucharist, result in an anemic worship experience. Rather, Billings argues, emphasis on the Pauline motif of “union with Christ” serves as a better conceptual infrastructure for both the message of the gospel and the meaning of the Eucharist that will, Billings wages, result in deeper and more comprehensive worship. Part two of the book is the heart of the constructive portion. Here Billings offers a vision of the Eucharist that draws especially on the Reformed confessional tradition. Finally, in the third part, Billings highlights the intersection of the Eucharist with another prominent theme in Reformed theology, union with Christ. Drawing on insights made explicit in his 2011 Union with Christ (Eerdmans), Billings shows the telos of the gospel not to be a simple, judicial forgiveness of sins, but indeed a robust union with Christ. Billings explores this motif in conjunction with those notions that form the title of the text: remembrance, communion, and hope.

My evaluative comments will focus on part two, Billings’ constructive retrieval of a Reformed vision of the Eucharist. At the institution of the Eucharist, Christ said of a piece of bread, simply and straightforwardly, that it was his body. Interpretations of this utterance in the broad catholic tradition take this statement at face value. Yet, many in the Reformed tradition have a penchant for adding preponderance of qualifications to what Christ said. Billings is, in this regard, no different from his theological predecessors. For instance, Billings’ writes that the Eucharist “not only signifies but also truly exhibits, offers, and communicates Jesus Christ” (p. 74), in the Eucharist “God signifies, assures, and seals his promise…the Spirit offers, presents, and communicates Christ’s body and blood” (p. 75), and that “By the Spirit, the Supper presents a material sign that displays the gospel promise, and when received in faith, assures, nourishes, and enlivens the recipients” (p. 76, emphasis added in above quotations). Certainly many in the Christian tradition think that all these verbs are denoting veridical aspects of the Eucharist. But why not just say, “This is the body of Christ”?

Seemingly, for Billings and the Reformed, when in the liturgical setting, the minister refers to the elements as the “body” or “blood” of Christ, the minister does not intend to communicate that potential recipients are being offered the body or blood of Christ. Rather, potential recipients are offered “whole person of Jesus Christ” (p. 73) by means of the elements so termed “body” and “blood.” Billings quotes favorably Jan Rohls, that the terms “body and blood” “do not stand ‘for two different materials—that is, two parts of Christ. Instead they designate the whole person of Christ sacrificed for us, the person along with his work.’” At times, Billings goes on to say, “this is explicit in the confessions,” wherein he cites the First Helvetic Confession, “In the Lord’s Supper the Lord truly offers His body and His blood, that is, Himself, to His own to enjoy (pp. 73-4, emphasis Billings’). But it seems that this qualification is just to deny that when Jesus said that a piece of bread was his body, he meant that a piece of bread was his body. Moreover, I do not think that any proponent of a straightforward read of the dominical words would wish to hold that a recipient of the elements does not receive the whole Christ. In fact, even the Roman Catholic Catechism holds that in the Eucharist one receives the body, blood, soul, and divinity of Christ, which is just to say, the whole of Christ. Nevertheless, for the broad catholic (in distinction from the “Reformed” catholic), it is in virtue of the fact that the bread and the wine are the body and blood of Christ that the whole Christ is offered to potential recipients. Perhaps it is all well and good that the Supper does all these other things. But it seems odd that there is not an explanation forthcoming as to why one ought not interpret the dominical words in a straightforward manner. Despite this push back on but one—yet key—aspect of this text, there is much to glean from Billings creative retrieval of the Reformed confessional tradition.

There will be three main audiences that will benefit from this text: academic theologians, Reformed pastors, and non-Reformed pastors with an inclination for a deeper understanding of the central act of Christian worship. With respect to the first group, this book is a significant contribution to the study of sacramental theology and theologies of the Eucharist. In light of George Hunsinger’s 2008 The Eucharist and Ecumenism (CUP), David Grummett’s 2016 Material Eucharist (OUP), and my 2018 An Incarnational Model of the Eucharist (CUP), Billings’ book furthers what appears to be a resurgence of interest in the Eucharist in contemporary academic theology. Secondly, pastors in the Reformed tradition will find this text a treasure trove of resources from within their own tradition for teaching their congregations a robustly Calvinian doctrine of the Eucharist. Finally, there are many pastors today in Protestant and Evangelical churches who desire a deeper appreciation of the Eucharist for their congregations, but perhaps do not know where to sail in the sea of deep metaphysical waters that are many aspects of the traditional discussion. Billings’ text will be a helpful guide toward one safe harbor that is prominent in the Christian tradition. One need not take on the full package of Reformed theology to glean helpful insight into the theology of the Eucharist from this text. And, at the very least, it would serve to open up the theological imagination of many with respect to the use of the Eucharist in Christian worship.