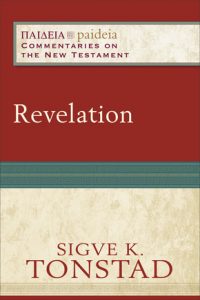 Sigve Tonstad is a well-established scholar whose work in biblical studies explores issues of theodicy, hope, and ecological hermeneutics. In addition to the volume under review, his English works include The Scandals of the Bible (Pittsburg: PA, Autumn House Pub. 1996); Saving God’s Reputation (New York: NY, T&T Clark, 2006); The Lost Meaning of the Seventh Day (Berrien Springs: MI, Andrews University Press, 2009); The Letter to the Romans: Paul Among the Ecologists (Sheffield, England: Sheffield Press, 2017); God of Sense and Traditions of Non-Sense (Eugene: Oregon, Wipf & Stock, 2016), and numerous articles. Tonstad is a research professor at Loma Linda University. His background as a physician has made his study of Revelation as a book of healing (Rev. 22.3) a personal interest.

Revelation is a new addition to the Paideia commentary series by BakerAcademic. As with most commentaries on this challenging book, Tonstad includes the requisite introduction to Revelation. He discusses topics which give the reader a foundation on which to build an interpretation of the book. Among these are: questions of authorship, the relationship between Ancient Roman and Revelation’s visions, interpretative stances (preterist, futurist, historicist), genre, date, and the structure of the book.

Tonstad divides the remainder of his book into eleven chapters, following the contours of Revelation. He sees the units of Revelation as comprised of 1.1-20; 2.1-3.22; 4.1-8.1; 8.2-11.19; 12.1-14.20; 15.1-16.21; 17.1-18.24; 19.1-21; 20.1-15; 21.1-27; 22.1-21. Those familiar with commentaries on Revelation will recognize Tonstad unites certain sections which are typically treated individually in other works. Each section begins with a brief overview. In the “introductory matters” Tonstad connects the passage with the larger rhetorical flow within the storyline. Next is “tracing the train of thought” which contains a narrative dialogue with the text, often accomplished by uniting several verses together to capture the main thought. The chapters conclude with a discussion of the theological themes brought out in the passage being examined.

The previous paragraphs might leave the impression that Tonstad’s work is simply one in a long line of books attempting to make sense of Revelation’s visions. While true in one sense, the way in which Tonstad attempts to bring clarity to the symbols and meaning of Revelation is at once new, thought-provoking, exegetical, surprising, and devotional.

The introduction alerts the reader that this is not just another commentary on Revelation, but one that explores the book from an innovative perspective. Tonstad demonstrates chapter 12 exerts an influence reaching both directions within Revelation. The war in heaven scene is felt throughout the entire book. It permeates chs 4-11 as well as chs 13-22. From this viewpoint, Satan is not simply an ancillary character in the book, nor merely a representation of evil, but a thoroughly biblical character who plays an important role in the on-going conflict. Most commentaries do not develop the war in heaven theme nor mine it for its interpretative potential.

Tonstad engages with the expansive scholarly literature that views Revelation through the lens of the cult of emperor worship. He then demonstrates that this common view is the foundation for many interpretations of the book. Tonstad unfolds the weakness of this perspective, evidenced by the shifting understandings of Revelation’s historical context. Rather than Ancient Rome being an interpretive key, he posits an alternative. Tonstad argues the cosmic conflict is the lens through which the book needs to be read, and that the visions serve as an exposé of the deceptive agency of Satan.

Seen in this light, the throne scene of ch 5 is understood to be a reaction to the war that began in heaven. This war is won by the slain lamb (Rev. 5.5-7). Tonstad emphasizes that the lamb, though powerful, is slain by violence. This raises the paradox as to how the lamb can conqueror, while being slain. However, it is precisely in being slaughtered, that the lamb wins the war. Additionally, the idea of being crushed by violence is part of the character of the lamb, an aspect of his essential identity. In order to read Revelation correctly, Tonstad argues, the rest of the book must be interpreted through the revelation that the slain lamb provides.

In his discussion on the first six trumpets (8.6-9.12), Tonstad pursues an interpretation that is focused on the question of agency. The trumpets are almost overwhelmingly understood as God’s retributive judgments on an unrepentant world. Tonstad explores whether this perspective does justice to Revelation’s narrative. He concludes that the hyperbolic language here is more reflective of demonic activity than divine action. For example, the repeated use of “a third” in this section (8.7, 8, 9, 10, 12; 9.15, 18), is reflective of the “third” of the stars thrown to the ground (12.4, 7). There is a fallen star (8.10; 9.1), which reminds the reader of Isa. 14.12-15. The army described under the 5th and 6th trumpets are clearly demonic in nature, as is the king who presides over them (9.11). If Revelation is to be understood as an exposé, then it is appropriate to ask who is being exposed? God is revealed through the slain lamb, the Ancient Serpent (12.9) is revealed despite his deception and slander.

Tonstad’s handling of the sea and land beasts (13.1-18) continues his interpretative stance. Instead of viewing the beasts in this chapter through the “Roman lens” or a “future antichrist” lens, Tonstad draws attention to the idea that Satan is acting through his intermediaries. Rather than focusing on the myth of Nero’s return or what might unfold in the future, Tonstad demonstrates that this section is “Satan’s story.” The passage underscores both the slanderous lies that portray God in a wrong light, as well as the imitative aspect of the sea beast. Satan is the one behind the powerful imitation which results in the whole world being brought into the deception.

In the Rev. 22, Tonstad finds further confirmation for his cosmic conflict hermeneutic. The imagery of the tree of life brings the reader back to Gen. 3, where the serpent first promulgates his lies about the character of God. The serpent used the tree of knowledge as his instrument to misrepresent God. The interweaving of the biblical narrative that finds its culmination in the last book of the NT, makes a true revealing of God’s nature its main concern. Revelation portrays the reversal of all that was lost in the first garden. Distrust, alienation, and fear are replaced with open communion with God.

This commentary holds an important place in biblical-theological studies due to its insistence that the cosmic conflict holds a primary place for interpreting the text. Tonstad’s reading the text through the imagery of the slaughtered Lamb in battle with the slanderous, deceitful serpent brings new insights to several passages. His ability to carve out a fresh reading of Revelation while interacting with several schools of interpretation, and to do so in an accessible manner is to be highly recommended. The concepts Tonstad brings out demand important consideration in forming a correct interpretation of Revelation. The reader might not agree with all he has written but will be challenged and benefited from engaging with this work. 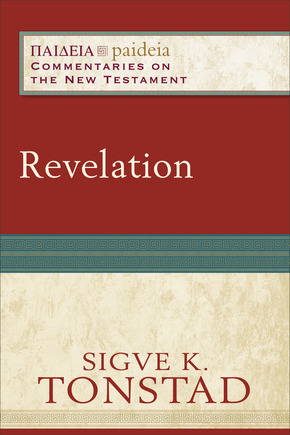