At 560 total pages, approximately 430 of which are devoted to detailed study of the introductory and exegetical questions that confront interpreters of the slim epistles of Jude and 2 Peter, this commentary on two of the smallest texts included in the New Testament is a mammoth, thoughtful, provocative, and thoroughly welcome contribution to the growing body of scholarship on these letters. Jörg Frey is Professor of New Testament Studies at the University of Zurich. This book was originally published in German in 2015 (Der Brief des Judas und der zweite Brief des Petrus [Theologischer Handkommentar zum Neuen Testament 15.2; Leipzig: Evangelische Verlagsanstalt, 2015]), and it is likely to be regarded as the most important commentary on Jude and 2 Peter since Richard Bauckham’s 1983 volume on the letters (Jude, 2 Peter [Word Biblical Commentary 50; Waco: Word, 1983]). Although Frey differs from Bauckham on a number of important points, not least the date of 2 Peter and its relationship to the second-century Apocalypse of Peter, the careful historical study of the text and the dedication to a theological reading of Jude and 2 Peter will make this commentary a valuable dialogue partner for all who study the Catholic Epistles. The translation of Kathleen Ess is clear, admirably readable, and conveys not only the meaning but also much of the tone of the German passages that this reviewer spot-checked. In short, this is a volume worth consulting when exploring either Jude or 2 Peter.

Frey follows much of New Testament scholarship in dating the letter of Jude before 2 Peter. Jude thus precedes 2 Peter in the commentary. The letter includes a number of words that do not appear elsewhere in the New Testament (hapax legomena), and Frey concludes that it is linguistically one of the more sophisticated rhetorical compositions in the New Testament (pp. 10–12). While Jude may not quote often from canonical Old Testament texts, it employs scriptural examples and is aware of Second Temple interpretive patterns. Most striking, perhaps, is the extent to which Jude draws upon 1 Enoch, even quoting 1 En. 1.9 at Jude 14–15. Frey argues that the author of Jude, whom Ess refers to as Judas (Ἰούδας; see further p. xv), has written a pseudepigraphal text that can roughly be dated between 100 and 120 CE. In Frey’s view, the text was written in part as a response to the author’s opponents, whom the author understands to have transgressed cosmological boundaries with regard to the recognition of the cosmic powers. Frey thinks that it is most likely that these opponents, whose own words we no longer have access to, can be placed within the Pauline reception that occurred in the late-first and early-second centuries. In tension with the treatment of Christ’s defeat of the powers in Ephesians and Colossians, the author of Jude maintains a high view of the angels even while depicting Christ as the pre-existent master and Lord.

A few highlights can be given from the commentary on Jude to offer a taste of the exegetical work in the commentary. Frey understands the participial clause in Jude 3 (which can be woodenly translated as “making all haste to write to you about our common salvation”) to have a “relatively weak” concessive relationship to the main verb (p. 67). The faith about which the author speaks in the same verse should be understood in terms of fides quae creditur, that is, the faith that is believed. Thus when Jude speaks of faith in v. 3, he refers to something that approaches Christian doctrine rather than to the act of believing. Jude does not hesitate to quote 1 En. 1.9 as an Enochic prophecy (Jude 14–15). Frey differs from Bauckham’s position that Jude has directly translated 1 En. 1.9 from Aramaic into Greek. Instead, Frey considers it more plausible that Jude drew on a Greek version of 1 Enoch that was available to him. In turning to the doxology of Jude 24–25, Frey helpfully points out that the liturgical ending to this letter indicates that it was composed in order “to be read aloud in the context of worship among the addressee congregation(s) (p. 154). Although individual interpreters may find points of disagreement along the way, Frey’s exegesis is consistently engaging and carefully argued.

Perhaps the most significant point of difference between Frey’s commentary and the work of Bauckham concerns the relationship between 2 Peter and the Apocalypse of Peter as well as the implications that these discussions have for the date of 2 Peter. Frey follows Wolfgang Grünstäudl in arguing that 2 Peter postdates the Apocalypse of Peter (pp. 201–206; see further Grünstäudl, Petrus Alexandrinus: Studien zum historischen und theologischen Ort des zweiten Petrusbriefes [Wissenschaftliche Untersuchungen zum Neuen Testament 2.353; Tübingen: Mohr Siebeck, 2013]). If both Jude and the Apocalypse of Peter precede 2 Peter, then the dates of these texts become vitally important for determining the date of 2 Peter. If Jude was written in the first two decades of the second century (see pp. 31–32) and the Apocalypse of Peter dates to the 130s (see pp. 202–203), Frey regards a time between 140–160 as the most likely date for 2 Peter (pp 220–221). This date requires a pseudepigraphal interpretation of the letter. Frey goes on to ask important questions about the genre and function of pseudepigraphy (pp. 217–220). He argues that the letter is openly pseudepigraphal. On such an understanding, one may suppose that the author wrote a pseudepigraphon without particularly trying to disguise their effort, although it is not necessarily the case that the audience would have been as willing to go along with the fictional ascription. Indeed, the reception of the letter and its place on the fringes of the canon during the third and fourth centuries suggests that later readers had particular difficulty in accepting a pseudepigraphic letter and also in accepting that 2 Peter was authentically Petrine (on the early reception of 2 Peter, see pp. 168–173).

As with any attempt to date a historical document, this lengthy discussion of the date and authorship of 2 Peter may be challenged. Yet even those who regard 2 Peter as authentically Petrine will benefit from reading Frey’s exegesis of the letter. He interprets the language of “partners in the divine nature” (2 Pet 1:4) in ethical terms and employs a variety of sources from multiple Greco-Roman, Hellenistic Jewish, and early Christian backgrounds (pp. 263–269). He regards Peter’s eyewitness testimony to the Transfiguration as closer to the account of the Transfiguration in the Apocalypse of Peter and thus not as dependent upon Matt 17 (pp. 294–296). Finally, Frey helpfully draws attention to the unusual way in which the author of 2 Peter mentions Paul—whom he has not yet mentioned explicitly—in the letter closing (2 Pet 3:15–16), a place in the letter where one would not expect the introduction of a new topic (p. 419).

In an exegetical project that is this large, one will likely find places to disagree with interpretations of particular passages. For example, Frey’s interpretation of the allusions to the Transfiguration and their relationship to the Apocalypse of Peter may downplay the importance of Synoptic accounts of the Transfiguration too much. In particular, if one allows for the transmission of the Matthean Transfiguration account through social memory or secondary orality, it may be possible to grant a larger place to the Synoptic Gospels in the composition of 2 Peter. Nor will all be convinced by the dating scheme that Frey proposes for Jude, the Apocalypse of Peter, and 2 Peter. The dating of these texts remains challenging, and further discussions have followed Frey’s commentary (see, for example, the essays in Jörg Frey, Matthijs den Dulk, and Jan van der Watt, 2 Peter and the Apocalypse of Peter: Towards a New Perspective, Biblical Interpretation Series 174 [Leiden: Brill, 2019]). Such disagreements among interpreters, however, are part and parcel of New Testament scholarship. They do not take away from the immense value of Frey’s theologically oriented exegesis.

Reading this commentary from beginning to end is not an activity for the faint of heart. The text is filled with small-print excurses that provide additional information detailing the history of scholarship on an issue or supporting Frey’s arguments for an interpretation. Yet it is precisely in the combination of the many detailed arguments and the coherent portrait that the commentary paints while exploring these small epistles that the richness of Frey’s exegesis is to be found. The seriousness with which this commentary takes Jude and 2 Peter as theological texts, wrestles with the implications of their polemic, and situates these letters alongside other early Christian literature are much to be admired. The translation and publication of yet another important German-language commentary by Baylor University Press is a gift to Anglophone students, teachers, and researchers. These, along with the theological libraries who support their study, will want to consider purchasing this important commentary on Jude and 2 Peter. 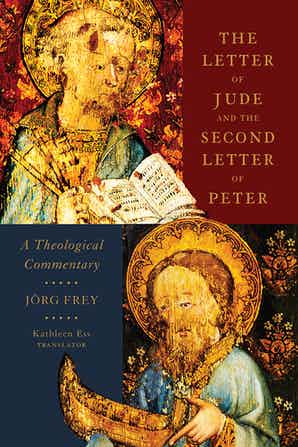