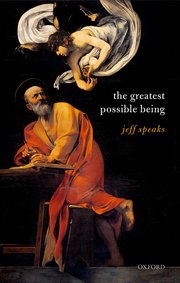 In The Greatest Possible Being, Jeff Speaks takes aim at critically analyzing the method of perfect being theology. Perfect being theology is a philosophical method for developing a specific doctrine of God. In particular, the method claims to guide one’s thoughts towards deriving the divine attributes. Speaks is skeptical about the ability of this method to accomplish this task. Over the course of eight chapters, Speaks offers an analysis of metaphysical, epistemological, semantic, and theological issues related to the task of perfect being theology.

In step 2, a greatness condition is meant to help the theologian identify which attributes are possessed by the greatest actual, possible, or conceivable being. Speaks claims that there are two desiderata that a greatness condition must satisfy: entailment and informativeness. With regards to entailment, it should follow from the fact that some particular property F is a great-making attribute, and the relevant modal principle, that F is a property of God’s. The informativeness desiderata states that it should be possible, without relying on prior substantive claims about God, that a candidate divine property satisfies the greatness condition.

Yet, one might wonder what is wrong with the modal principle ‘God is the greatest possible being.’ Speaks offers an assortment of arguments for why this modal principle cannot be used to derive the divine attributes. However, I often found myself thinking that Speaks has ignored some obvious moves that perfect being theologians traditionally make. One worry that I have is that Speaks has not given a proper analysis of what it means to be the greatest possible being, nor of what makes a property a great-making property.

Traditionally, theologians and philosophers have said that a proper analysis of greatness entails that God has all of the perfections, or great-making properties, in an unsurpassable way. This sort of analysis can be found in Anselm, John Duns Scotus, and Leibniz, among others. This analysis has also received a rigorous defense in Yujin Nagasawa’s recent work, Maximal God: A New Defence of Perfect Being Theism. With this analysis of greatness, the perfect being theologian then gives an analysis of what makes a property a great-making property. Typically, it is said that a great-making property is a property that it is better to have than not to have. Traditionally, this has been analyzed as identifying fundamental properties that would make any being whatsoever intrinsically better. A classic example is being powerful. Any being with the property being powerful is intrinsically better than any being that lacks the property being powerful. Further, any being that has the property of being powerful in an unsurpassable way is better than any being who lacks this.

I find this questionable. It seems obvious that a proper analysis of ‘greatest possible being’ entails having all of the great-making properties. Moreover, I find it obvious that this understanding of greatness would play a significant role in my thinking about God’s perfection. This is evidenced by the fact that many debates in philosophical theology are about which model of God includes more great-making properties, and which involve God in having those properties in an unsurpassable way. For instance, classical theists often argue that open theism provides a less than perfect model of God because open theism denies that God has certain attributes like exhaustive foreknowledge.

However, Speaks maintains that even this impure form of perfect being theology cannot be used to derive the divine attributes. In his critique of this impure method, I found that Speaks’ discussion of the candidate great-making properties continually focused on kind-relative properties like being a well-functioning cardiovascular system, instead of fundamental properties that are intrinsically great-making, all things being equal. Traditionally, perfect being theologians have tried to clarify this point by distinguishing pure perfections from impure perfections. Speaks does offer a brief discussion of the pure/impure perfections distinction, but Speaks dismisses this as trivial.

All in all, I think that Speaks’s exact analysis of perfect being theology is less obvious than it might have been; at points it is often difficult to pin down precisely where his objections lie and from where his objections come. That being said, Speaks clearly identifies a host of problems that perfect being theologians need to avoid when developing their method. More advanced theology and philosophy students will want to consider the problems that Speaks identifies, and make sure that they avoid them. Beginning students will be better off starting with a book like Thomas Morris’ Our Idea of God, or Yujin Nagasawa’s The Existence of God. Once beginning students have mastered this material, they should be in a good position to engage with Speaks’s arguments.