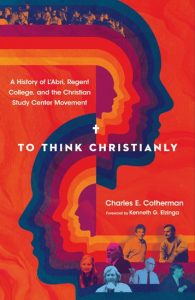 I owe a great personal debt to Christian study centers. I became a believer at Swiss l’Abri, from an agnostic background at age 19. My wife and I were on staff at the FOCUS Study Center (Fellowship of Christians in Universities and Schools) on Martha’s Vineyard for a number of years. And I was a Senior Faculty Member (a part-time job) at the Trinity Forum Academy (which became the Trinity Fellows Academy) at Royal Oaks, Maryland, for some fifteen years before its closure. Even though my career has been largely in established graduate schools, I am a strong believer in lay education.

At a time when many histories of the evangelical movement are critical (sometimes deservedly, but often agenda-driven) it is refreshing to read Charles Cotherman’s perspective. Cotherman, a Vineyard pastor, based To Think Christianly on his University of Virginia doctoral dissertation. This is a marvelous book—informative, engaging, and deeply fascinating. Both the main thesis and the outline are simple. The argument is that l’Abri and Regent College, in two rather different ways, spawned a number of influential study centers which changed thousands of lives. After the Foreword by UVA Professor of Economics Ken Elzinga (active in Christian ministries) and an introduction, there are seven chapters, each dedicated to one of the following centers: L’Abri (Huémoz, Switzerland and elsewhere), Regent College (Vancouver, British Columbia), the C. S. Lewis Institute (Springfield, Virginia), the Ligonier Valley Study Center (Stahlstown, Pennsylvania), New College Berkeley (University of California-Berkeley), the Center for Christian Study (UVA), and  the Consortium of Christian Study Centers (Charlottesville, Virginia, a few miles from UVA).

In lieu of rendering a pedantic account of each of these chapters, a few substantial comments will suffice. The work most familiar to the reviewer and perhaps to most evangelicals is l’Abri (as an aside, the French spelling with a small “l” is better). Cotherman managed to avoid opinions about Schaeffer’s move into alliances with the evangelical right, the rather poor quality of the late-1970s film series, How Shall We Then Live?, and son Frank’s tirades. In one way, good for him. Perhaps in a book about community, though, some mention could have been made about the difficulty of raising a family in the midst of stardom, the problem of succession after Schaeffer’s death, and the pressure many felt to imitate the Schaeffers without having their boundless energy or charisma. Succession was a challenge in most of the other study centers.

His account of Regent College, and particularly the role of co-founder Jim Houston is riveting. Readers may be surprised to learn how many of these study center leaders came from a Plymouth Brethren background. Humanly, this might explain two things. One is the hunger for a broader and deeper connection between the Christian faith and the world around. Brethren theology is not typically concerned for social issues. Reactions are understandable. The other is the burden for lay training. The Brethren, at least under John Nelson Darby, did not recognize an ordained clergy. Houston, David Gill, and others were less doctrinaire about this, yet they clearly developed a sensitivity to training those not necessarily called to the pastoral ministry. Regent would eventually develop a biblical and theological track, but it always kept its focus on educating lay persons. How does the gospel apply to business, science, the arts, and other fields? Unlike l’Abri, Regent was founded by an Oxford don (Houston). Although it bore some similarities to l’Abri, it was more closely modeled after Tyndale House in Cambridge, England, an evangelical research institute for biblical scholarship. In addition, Regent sought to attract first-rate scholars to its staff. It was helpful that Houston had a friendship with C. S. Lewis. The close connection of Regent to the University of British Columbia was intentional.

As is well-known, other players at Regent such as Professor of New Testament Ward Gasque and his wife, Laurel, and Professor of Old Testament Carl Armerding helped foster an atmosphere that combined academics with hospitality. In one way or another, this combination is reflected in each of the places Cotherman looks at. As well, one observes that each was created or sustained by a strong personality. It could not be otherwise, though. Such bold initiatives usually do not spring up from an amorphous background. Jim and Lorraine Hiskey, retired from the golf world, helped create and sustain the C. S. Lewis Institute. The location in suburban Washington, D.C. meant it was natural to contact politicians and chaplains along the way. Ligonier Valley was centered on R. C. Sproul, one of the greatest communicators of theology on the planet. New College was from the mind of David Gill, a Jacques Ellul specialist. The Center for Christian Study was led by David Turner and Drew Trotter (who held a PhD in New Testament studies from Cambridge University).

One concern Cotherman regularly brings up is the role of women. Regent had more of a place for women than many ministries. Linda Mercadante and Thena Ayers, both from a l’Abri background, contributed significantly to life at Regent, Mercadante as a 1978 Masters of Christian Studies graduate and Ayers as Regent’s first permanent female professor.  The Ligonier Valley Study Center, while heavily oriented to R. C. Sproul’s vision, gave a prominent teaching and leadership role to Jackie Shelton (later Jackie Griffith) in 1975. Sharon Gallager shared in the leadership of New College Berkeley with David Gill. Still, women do not seem to have true equality with men in these places. Cotherman notes this issue without any kind of vendetta.

Historiographically, demonstrating the role of l’Abri and Regent in spurring the other centers is a tall order. But Cotherman’s case is persuasive. Both informally and through the formal interactions of these places with Schaeffer and Houston, a clear connection exists. After reading this thoroughly documented story, so well written, three issues needing further exploration. First, why did every one of them, at least from their original form, decline or even fold? Some did morph into new expressions: l’Abri is alive and well in various branches; the Center for Christian Study continues to provide a haven for students. But not everything went well in these places after the initial thrust. As one could anticipate, there were leadership issues, leading to problems with burnout and succession. Financial strains were omni-present. But Cotherman also suggests another reason. There was a shift in the priorities for many young people these centers were trying to reach. According to various studies, whereas in the 1960s American freshmen endorsed “developing a meaningful life philosophy” as an essential value, by the late 1980s financial security and personal peace were the norms (p. 182). Certain issues caught the study centers unaware, particularly in the area of gender and sexuality. Unless new wineskins could be found some of these centers would lose their purpose. The 2018 closure of Trinity Fellows Academy in Maryland is a recent example.

The second question is how these study centers relate to the church. To be sure, none of these works could be strictly ecclesiastic, nor perhaps should they be. A few, such as the Center for Christian Studies, were strongly supported by a local church (Trinity Presbyterian, led by Joseph “Skip” Ryan). The creative minds who led them were necessarily mavericks but none of them denied the centrality of the church (Matthew 16:18). Schaeffer, for example, founded a small Presbyterian denomination (the International Presbyterian Church), and l’Abri residents  attended church on Sundays. Yet Schaeffer also called evangelicals “bourgeois,” and it was easy for some participants to resent the institutional church’s inability to think through issues and to reach people effectively. Consequently, some viewed study centers as an ecclesiastical alternative rather than accompaniment. But could there not be a way to have integrated these centers more symbiotically with the church? Perhaps the model of Redeemer Presbyterian Church in New York City is a potent example of combining traditional worship and preaching with endeavors such as Faith and Work. But how to challenge the local church to respond to the issues in the surrounding culture remains.

The third issue is rather petty. Or is it? The title of this wonderful book is Thinking Christianly. Yet the bulk of it is not about Christian philosophy but about community living. To be sure, the purpose of these communities is to foster a place for education; however, readers are left without much comment on the task of thinking Christianly. Perhaps, it was wise to leave this stone unturned. A second book may be needed to examine the philosophy, theology, and worldviews taught in these places.

Where do we go from here? In the end, Cotherman pleads for “faithful presence,” the phrase elucidated by eminent sociologist of religion and evangelical commentator James Davison Hunter in To Change the World (OUP, 2010). In the first part of his book, Hunter chides Christians for worldview thinking and idealism. I say, let’s be idealistic! With realism, yes, but with hope. Charles Cotherman deserves thanks for opening the door. 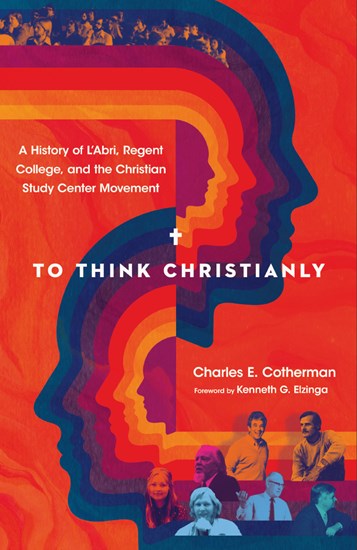