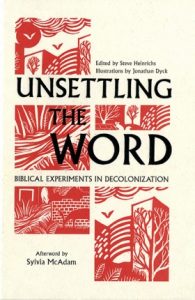 Steve Heinrichs, editor and contributor of Unsettling the Word, is the Director of Indigenous-Settler Relations for the Mennonite Church of Canada. He is an ardent activist for Indigenous peoples and passionate about what he sees as the church’s call to solidarity and reconciliation with this oppressed community. As evidence of such passion, Heinrich was a faith leader who was arrested and served seven days in prison for being with the Musqueam, Squamish, and Tsleil-Waututh peoples. Along with them, he was protesting the expansion of Kinder Morgan’s Trans-Mountain pipeline in Burnaby, B.C.

His book, Unsettling the Word, is a timely and conscience-stirring work that seeks to liberate scripture from the traditional lens of settler colonial societies. The book is not an orthodox monograph, but a compilation of 68 independent interpretive stories and poems by a diverse group of scholars, poets, artists, and activists who desire to free scripture from those who have utilized the Bible as a “weapon to dispossess Indigenous and racialized peoples of their lands, culture, and spiritualties” (p. iii). It wrestles with scripture, both “re-imagining and re-interpreting the ancient text for the sake of reparative futures” (p. iii). Each chapter begins with approximately one to three verses beginning with the Genesis creation story and moving through to the Book of Revelation. The selected verses are then followed by a two to three-page story, either non-fictional or fictional or a poem that “boldly re-imagines the old stories,” seeks to “expose the violence of specific texts,” provides “radical commentary with pointed calls to action,” or does “nothing, but pray the text back to us, to the land, and to God” (p. xv). The topics discussed include, but are not limited to, the plight of the immigrant, the injustices of Indigenous peoples, the abuse of creation, and the empowerment of the “weak.” Many of the interpretations are impactful, but too numerous to mention in the parameters of this review. Therefore, only three impressionable interpretations will be mentioned.

The first is Vivian Ketchum’s interpretation of Ruth 1:15-16 titled, “What about Orpah?” This interpretation captures the plight of the immigrant child who knows nothing else than the land she was raised. It is reminiscent of the many children we call “Dreamers” in the United States, who though were born in a foreign land, are in every practical sense, “American.” Ketchum’s poignant words demonstrate this reality, “Why should I return to a land that’s a stranger to me? I’ve lost the language of my people. Lost the customs. Lost the traditions.”

A second contribution is titled “The Foolish of Petropolis” by Heinrichs. He compares the Tower of Babel to the Alberta oil sands in a provocation to the ones who are constructing pipelines and cities that are damaging, and even completely destroying, parts of the natural world in the name of advancement and natural resources. Strong language is employed (pp. 12-15) which is arguably inappropriate for a faith-based book such as this. However, the use of such language seeks to demonstrate the frustration and indignation of the author against the injustices that both Indigenous lands and lifeforms have endured at the hands of the dominant colonizing culture.

And lastly, “Economies of Enough” by Carmen Lansdowne reinterprets Exodus 16:4 highlighting North America’s overconsumption, greed, and distrust in our creator, provider, and sustainer. Lansdowne notes that these behaviors that plague Canada, much like the United States, are inconsistent with the “lessons taught to the Israelites through God’s gracious, daily provision of manna and quail and Indigenous traditional ways” (p. 28).

The strength of this work lies in its ability to provoke thought, convict the conscience, and challenge old held beliefs and interpretations of scripture. There was a stirring of the conscience that occurred with many of the stories and poems in the text, leaving the reader indignant, remorseful, frustrated and/or melancholic from interpretation to interpretation. There is a call to action embedded within each story and poem. But are there instances where the contributor went too far? Does this volume include passages that misrepresent the text, stretching it to fit their agenda? Despite the many strengths of the book, there was a sense that some of the interpretations stretched the confines of solid scholarship, crossing the border into impassioned pleas and bold political statements. This is evident in Mitzi J. Smith’s contribution titled, “Resisting the Great Co-Mission” and “Beyond the Strong Man” by Ralph Armbruster-Sandoval, where brazen language and political statements respectively are used to support their interpretations of scripture. Is this type of reading justifiable? Considering that the goal of the book, which is to offer “gritty, experimental reflections that can be used in pulpit and street to surprise, stir, and startle us into seeing the prophetic word new and strange,” these examples aided in accomplishing this aim (p. xiv).

Heinrich’s two main sources of inspiration, James Cone and W.E.B. Du Bois, who co-founded the National Association for the Advancement of Colored People that he shares in his Preface, demonstrate the influence and importance of Liberation Theology in the creation of this project. Liberation Theology employs action-reflection (praxis-oriented) methodologies in response to particular forms of oppression. Indeed, Unsettling the Word is successful in employing praxis-oriented methods as a response to the oppression of Indigenous communities who have been treated as subservient to the dominant culture. Therefore, a student desiring to understand Liberation Theology would benefit from this compilation of interpretive stories and poems.

The nature in which the book is structured lends itself to short studies both in an academic or church setting. The recently released Study Guide contains both engaging questions to provoke thought and help stir discussion. In addition, though the text wrestles with difficult issues, it is not exceptionally erudite, making it more accessible to a broader audience. Therefore, Unsettling the Word would appeal and be beneficial to individuals ranging from serious students of theology, to activists for Indigenous peoples and other oppressed communities, to lay people in the church desiring to expand their purview of biblical interpretation. 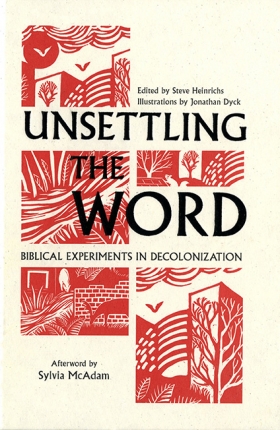